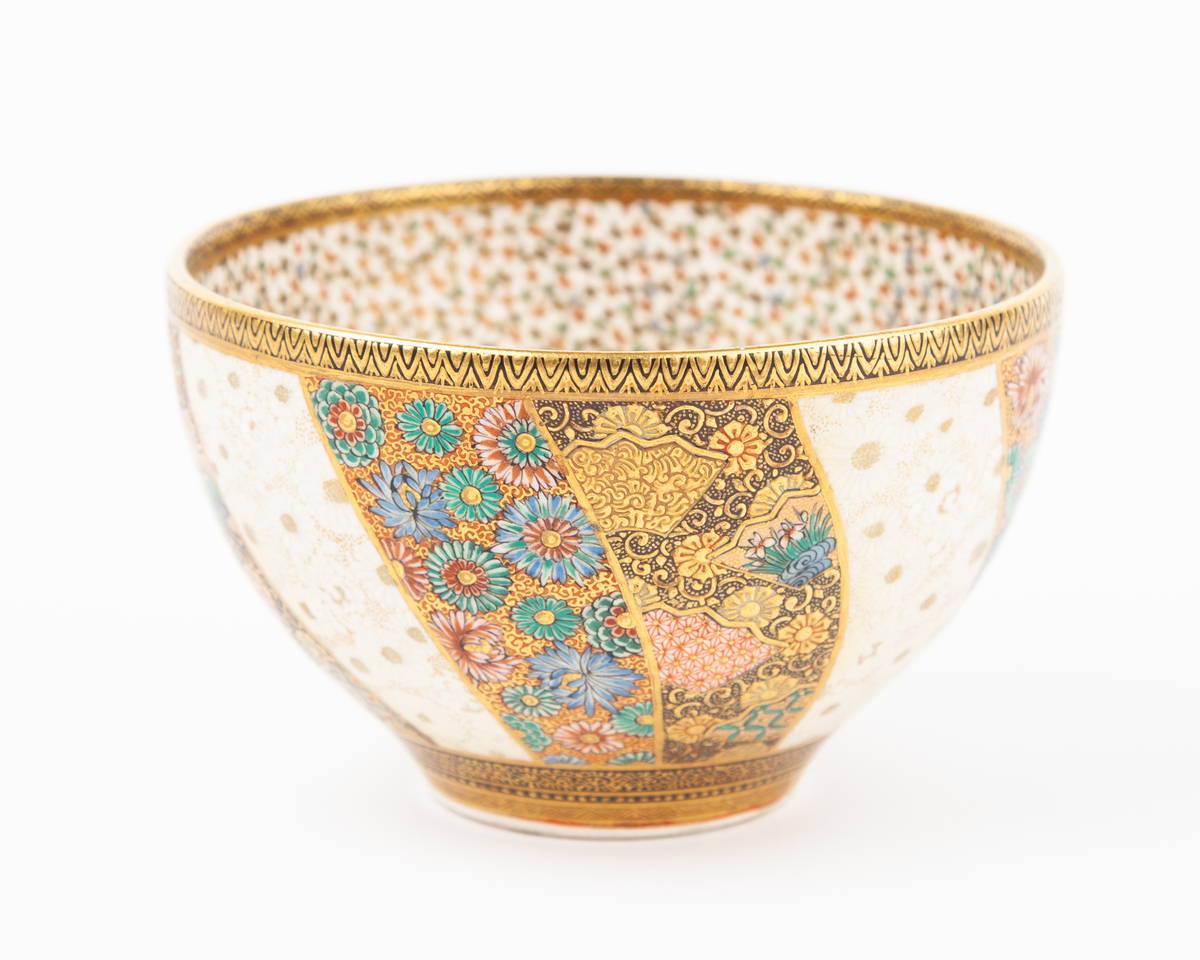 Porcelain, pottery and earthenware are all described by the Japanese word ‘yaki’, which simply translates to ‘ware’. Such wares are regarded as pieces of art, the successful production and popularity of which have played a vital role in Japan’s development as a country by providing a connection to the world at large during Japan’s most closed off era and lending political power to local authority.

Even though earthenware has been widely produced on the archipelago from as early as the Japanese Neolithic period (Jomon period from 10000 to 300 B.C), the real boom started in the 17th century when the army of Toyotomi Hideyoshi invaded Korea in 1598. During a short occupation at the dawn of the Edo period from 1592 to 1598, the Japanese kidnapped a few families who specialised in traditional arts, such as pottery, which in turn had come to Korea from China.

Kyushu, where these families were taken, proved to be rich in kaolin clay, which is the main component of porcelain. The latter is fired at higher temperatures than other pottery and had been out of reach for Japanese craftsmen. As such, the introduction of the Korean potters and their kilns to Japan laid the foundation of local porcelain production. Using this new technology, Japanese artisans became artistically independent in later years, even though continental influences remained present in their pieces to some degree.

When tea ceremony culture gained popularity in Japan in the late 16th century, porcelain production grew accordingly. Japan exported their products worldwide, continuing to trade even during the isolation of the Edo period (1603 – 1868). The Dutch East India Company was the major consumer of Japanese pottery at that time, stimulating development of this craft. Their first large-scale order was placed in Arita in 1656.

During the Baroque period, spanning the 17th century when Europe’s wealth grew, the demand for unusual, oriental and foreign products was tremendous. It grew so large that factories with the sole purpose of producing copies of Japanese pottery were established in Delft (the Netherlands), Meissen (Germany), Vincennes (France) and Worcester (England) to try and meet the immense need for porcelain of oriental style in Europe.

Over time, the style of Japanese ceramics was affected by the ever-growing demand, leading local artists to simplify their designs, culminating in the uniquely well-balanced aesthetic that Japanese pottery is known for today. 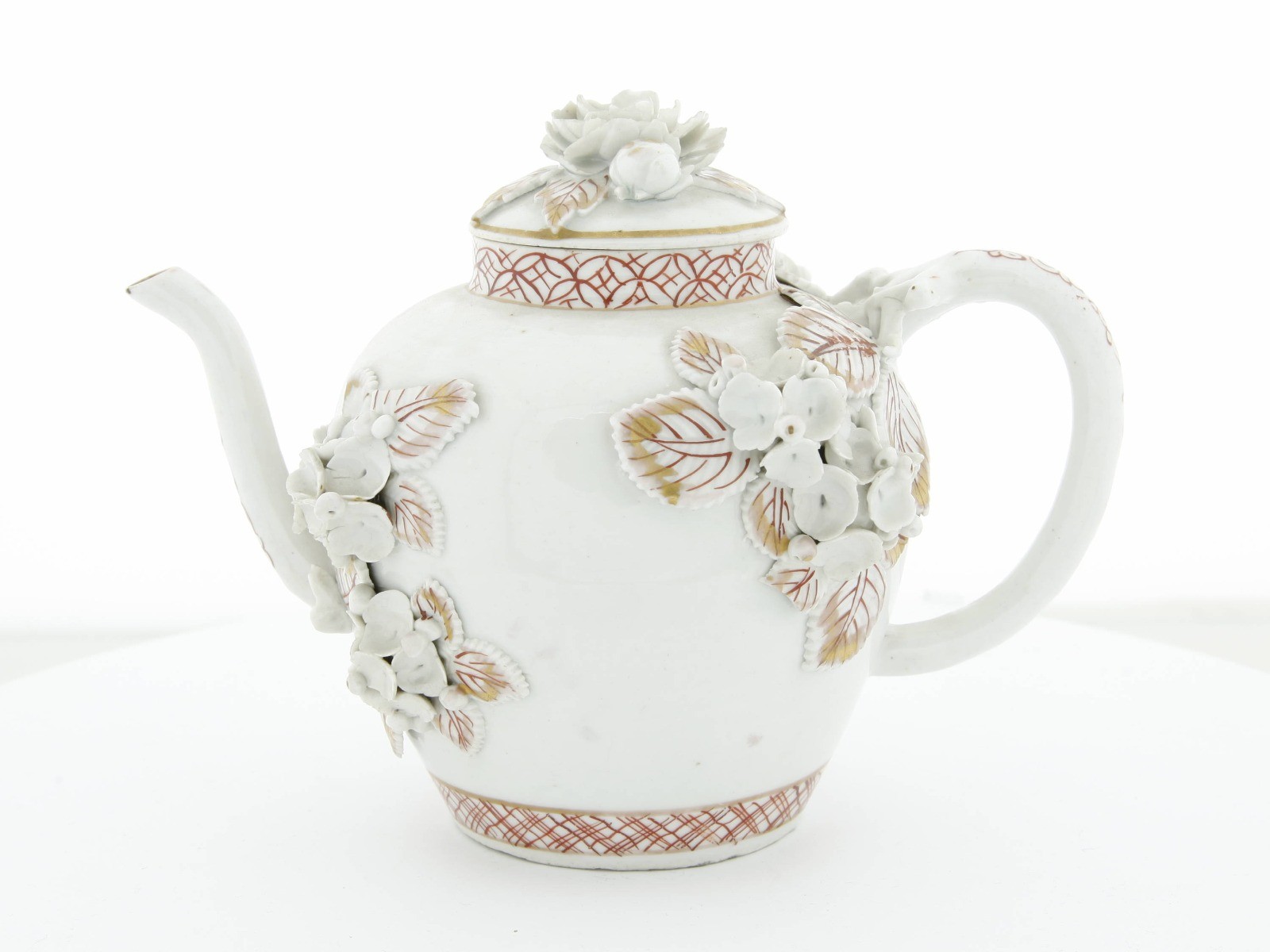 Arita and Imari porcelain gained their names from localities, the former referring to Arita city, whereas the latter references the nearby port of Imari from where Imari ware, which was specifically produced for export, was shipped internationally. As a result, Imari became synonymous with Japanese porcelain as a whole.

Due to the kaolin rich clay that can be found in that area, the centre of Japanese porcelain production is based on the southern island of Kyushu in Arita city. Kaolin clay is one of the key ingredients in porcelain production, which is why its discovery was crucial to this particular industry.

Korean craftsmen, who were brought over to Japan after the invasion of Korea, and their Japanese counterparts first found kaolin clay in Arita in 1616. Soon after, they built an advanced type of continuous step-chamber kiln of Korean design and produced the first pieces of porcelain. This happened at just the right time to fill a gap in the international market that developed due to political unrest in China, when the new Qing dynasty government stopped trade between 1656 and 1684. Japanese Arita kilns stepped up to fill the gap in the market and the porcelain was widely exported to Europe through the Dutch East India Company. As a result, a unique style emerged, combining 3 elements: 1. a Korean style overglazing technique introduced by the new kilns, 2. refined Chinese designs and 3. Imari porcelain, which was specifically designed for trade and the European taste.

The pieces we have on display at the Japanese Gallery Kensington are some of the oldest examples of Imari ware, produced for the Dutch East India Company. Their forms are inspired by western ware, the initials are of the Latin alphabet, but the decoration and the usage of enamel colours are clearly oriental in design. This type of porcelain had an immense impact on European porcelain production, inspiring Meissen and forging an international artistic bond that is still very much alive today. 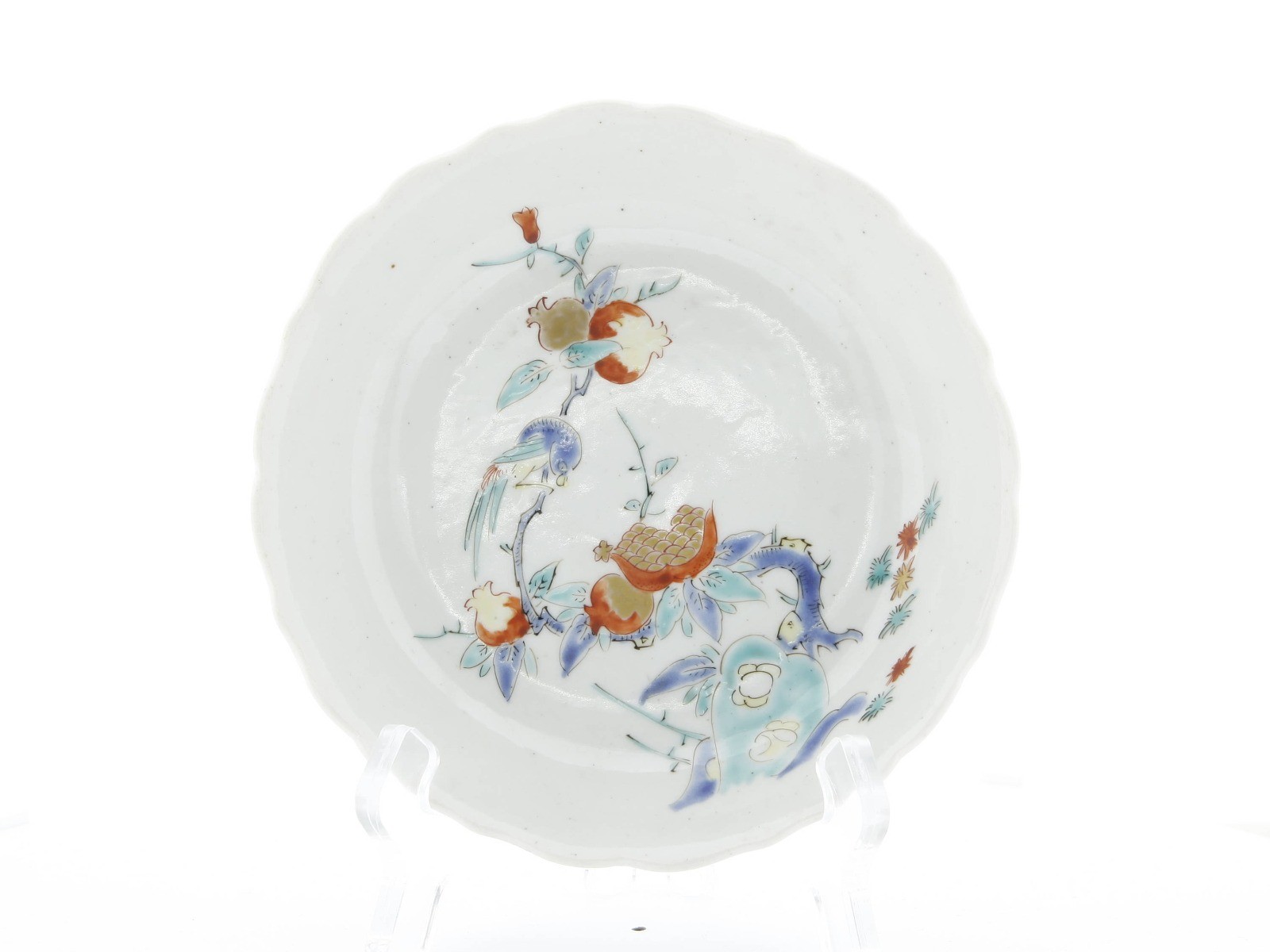 Kakiemon porcelain is a product of the Arita area. It took its name from its founder, Kakiemon I (ca. 1596-1666) of the Sakaida family. Kakiemon’s technology and style originated in China and were both based on a type of decoration that used enamel overglazes in several colours: red, light blue, yellow and purple. The Dutch East India Company has extensively exported Kakiemon wares to Europe, which were especially sought after in Germany, to the point that Meissen workshops soon started copying them. 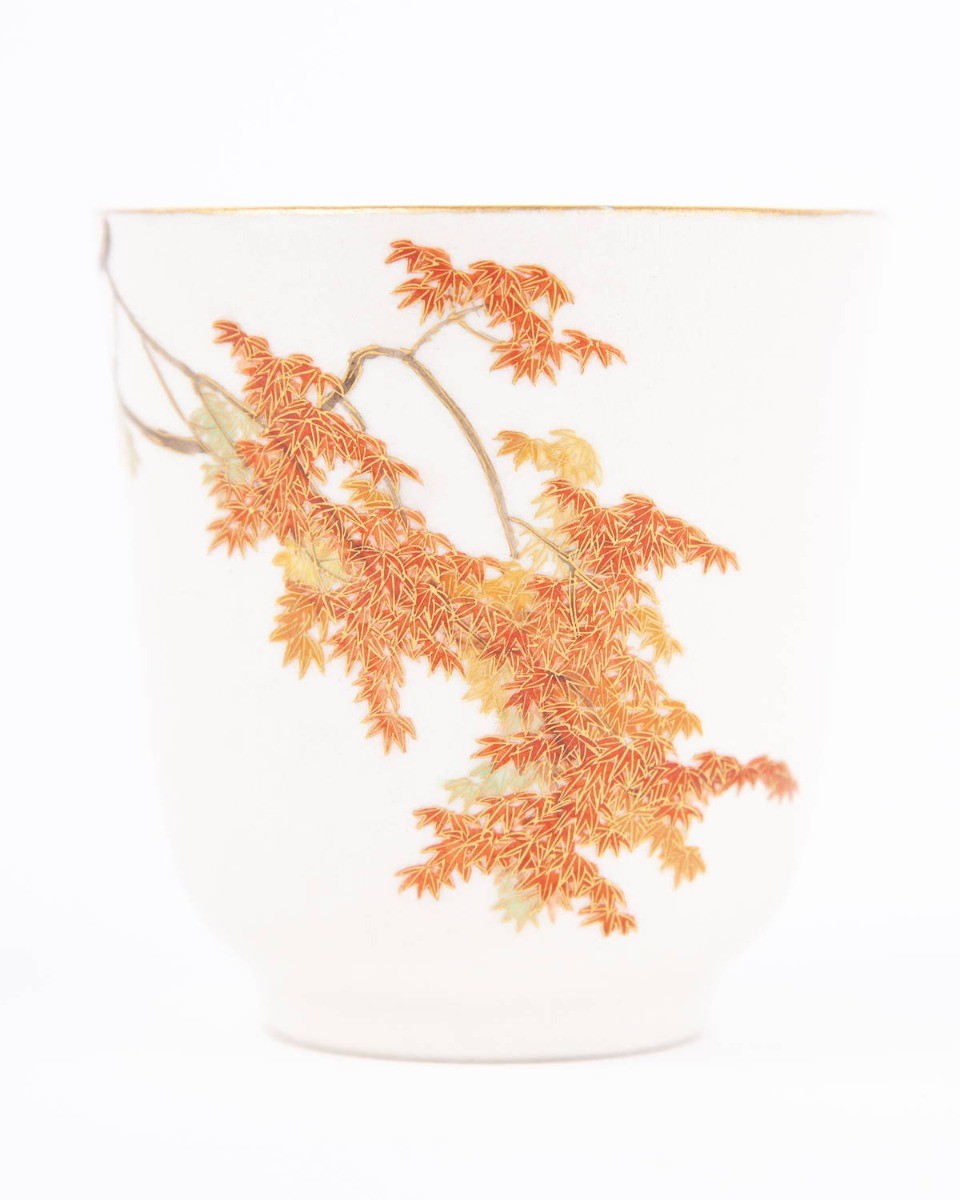 The first pieces of Satsuma ware, fired by Korean potters in the 17th century in Satsuma province, were known as Ko-Satsuma (Old Satsuma) and were covered with a thick dark glaze. They are nowadays considered to be very rare. These pieces have little in common with the typical Meiji era (1868 – 1912) Satsuma export products, which were produced in big quantities up until the late 1920’s and which were destined for the European and American export markets.

Typical Meiji Satsuma is a creamy glazed earthenware, covered with miniature decorative motifs, such as women, samurai, Japanese gods or immortals, as well as flowers, animals and landscapes. These images were elaborately produced by hand: painted in enamel, glazed, gilded, and finally fired in a kiln.

Pottery making in Japan has a long tradition, but since the Japanese wore no buttons, their production is a very recent development. It was not until the trade with the West had been established when Japan got to enter the Western market that these products appeared. Satsuma brooches and buttons are mostly circular, but other shapes, such as hearts, butterflies and flowers do exist. The subject matter of the decoration on these accessories is limited to four basic groups: botanicals, people, animals and scenes of everyday life. Like other Satsuma products, some of these bear the family crest (mon) of the Shimazu family (feudal lords who controlled the Satsuma domain), which helps to identify them as originals.

The history of Kutani ware goes back to the beginning of the Edo period (1603 – 1868) when a local feudal clan leader, Maeda Toshiharu, built the first kilns and brought over potters from Hizen province, which is where Arita ware was developed, to Kutani. Kutani is the present-day Saga Prefecture. The pottery made during what we now consider to be the first phase of Kutani ware (1655 – 1730) is highly valued and was later given the name of Kokutani.

In the second half of the 19th century, Master Shoza Kutani (1816-83) established a new production of Kutani ware, which proved to be very popular in the West. He invented the basis of the typical Meiji Kutani style: decoration such as birds and flowers, landscape motifs and geometrical fabric patterns were painted in brick red colours and were supplemented with gilding.

This interesting type of stoneware was developed in the province of Ise and has been specifically produced for the overseas market since the latter half of the 19th century. Typical Banko products are teapots of characteristic designs with peculiar decoration. Some of them are fully or partially glazed with an abundance of colours, while others wear no glazing at all.

Some designs include inventive, sculpture-like reliefs of birds and animals while other tea pots are decorated with theatre masks on each side including the lid. These are shapes characteristic of banko ware that showcase the cute, rough and earthy nature of this craft.