An Introduction to Japanese Swords

In Japanese history, there are three sacred treasures (Sanshu no jingi  三種の神器); the precious gems (magatama 勾玉), the sacred mirror (kagami 鏡), and the Japanese sword (tsurugi 剣). This belief has been present in the Japanese culture for over 1000 years. The Japanese sword is not only collected for its aesthetics, but also for what it stands for. And even to this day, when a sword is shown to individuals in Japan, they will always bow to the sword as a sign of respect before and after handling it.

The first type of sword was brought to Japan through trade with China and Korea. Later the Japanese encouraged Chinese and Korean smiths to work in Japan in order to teach them how these weapons were produced. At the time, they were known as chokokuto, a straight sword with a cutting edge on both sides. The technique of the single-edge swords made with folded steel was developed in the 10th century in Japan. 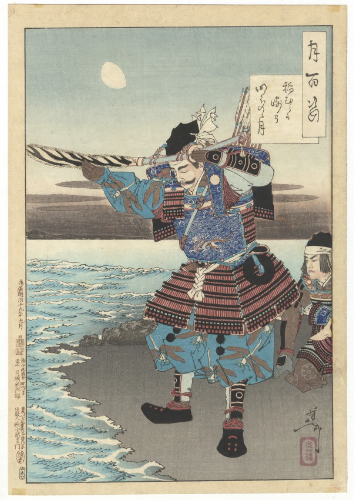 Up to this point the Japanese had imported iron to produce sword as there was no iron ore available in Japan. However they did discover satetsuI (砂鉄; image 1.1), sand metal or iron oxide (Fe2O3). This needed to be purified into a new form to produce iron (Fe2) and carbon dioxide (Co2).

Such sand is loaded into a huge clay kiln called tatara (踏鞴), which burns for 24 hours for about 5 days. The melted sand turns into stone like chunks (tamahagane 玉鋼; image 1.2), which are then sorted according to the carbon contents and chemical impurities.

This process extracts the oxygen from the iron and replaces it with carbon from the coal. Only the finest pieces are used for sword production. These are then sent to the sword smith, who heats the metal up and repeatedly beats it until the tamahagane is flattened to approximately 5mm thickness (image 1.3). The smith then breaks the flattened metal into pieces (image 1.4). By doing so, the crystal structure of the metal can be easily seen, which tells differences in the percentage of iron to carbon ratio in each piece. This process is important to separate soft and hard metals.

Once sorted by their carbon content, the fragments are mix and matched accordingly until the smith has got a good balanced mixture of iron. The pieces are then piled up alternately in low and high carbon content in a stack of 12-15 layers (image 2.1). This is then wrapped in paper, clay and straw, and placed in to the fire. The metal is heated and repeatedly beaten until all of the fragments are welded together (image 2.2).

At this point the sword smith makes an incision and folds the piece of metal backwards. He continues this process 12 to 15 times (image 3.1). Therefore if initial stack of 15 is doubled by folding 13 times, the final piece contains 122,880 layers of alternately soft and hard metal. The piece is beaten into a U shape in order for a softer iron metal to be placed inside (image 3.2). The two pieces are worked on until they are fully joined and it is repeatedly beaten until it resembles the shape of a Japanese sword. The method of beating the blade into shape is different in Japan to that of the Western style. A Japanese smith allows the blade to hover an inch off the anvil and then beat the metal. This means less heat is lost from the beaten metal as it has less contact with the anvil. This process also reduces the amount of times the smith needs to reheat the blade as well as shapes both sides of the blade simultaneously.

Once the shape of the blade is completed, clay is applied to the blade in key areas. The blade returns to the fire for the last time and is then quenched into a trove of water - this immediately locks in the carbon on the bladed side of the sword, giving it a different crystal structure that can be seen on a sword’s temper line, hamon (刃紋 image 4.1). At this point the polisher takes over the work and using 10 different polishing stones, accentuates the desired pattern that the sword smith wanted to crate for the hamon.

The very final touch is the signature. It is placed on the tang, and thus hidden when the blade is fitted in the handle and sheath (image 4.2).

From 900 AD, not only do we see the development of sword making, but also gokaden (), five schools of Japanese sword smithing, were established. They are Yamashiro-den, Yamato-den, Soshu-den, Mino-den and Mizen-den. Nowadays there are still Japanese sword smiths producing with the use of traditional techniques and methods from those schools. To become Japanese sword smiths, they need to pass an exam which can take an average of 7 years to gain.

Japanese swords are seen as an art form in recent years. At which point, the modern sword smiths are only allowed to produce 3 katana a month, using traditional techniques and materials. If they go over this quota, their products would be deemed as weapons as opposed to art pieces.

Prior to the 16th century, Japanese swords were shaped in the style of tachi, a long slender sword with a large curvature. This was primarily because during this period a lot of battles took place on large open fields and the warriors fought from horseback. This meant slashing actions were more affective.

In the 16th century, there was a transition in design of the Japanese sword. This was partly due to the changing in location from battle fields to castle invasion, as the land had already been captured and castles were built. Changes to the design of the blade were needed in order to accommodate thrusts and multiple parries. It was easier to wield a sword with a slight curvature for cutting and thrusting. The blade length was shortened for control, and the blade became thicker for endurance. This was the birth of the katana.

This short introduction to Japanese swords was created to demonstrate how much technical skill is required to create such a beautiful object. We hope that you no longer see a Japanese sword as a piece of metal but rather appreciate the artistic nature of the folding pattern of the iron, the balance of the blade, the shape, the temper line, and the most of all, the craftsmanship.