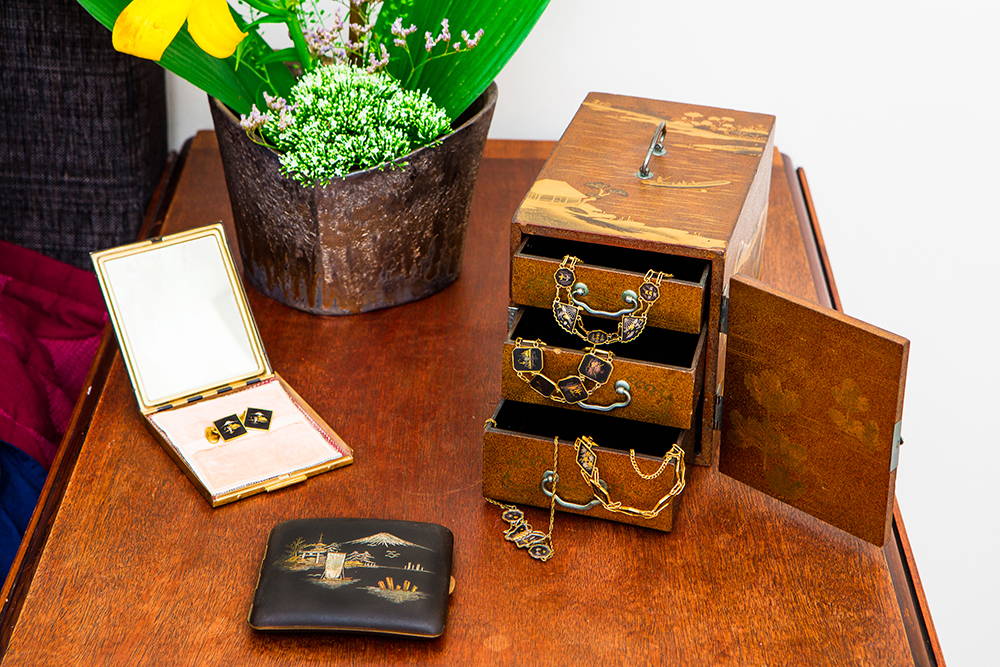 The Meiji period (1868-1912) brought many cultural changes to Japan after the country opened its doors to the West, as well as structural changes to the government, with it. What most critically impacted the arts, was the new ruling outlawing the carrying of swords by samurai. This ruling suddenly put swordsmiths and sword furniture artisans into a tight spot, as they lost most of their clientele. As a result, the Komai family, like many others, had to find another form of livelihood.

Luckily, these swordsmithing and metalworking skills could be used to produce a variety of items. Upon realising this, craftsmen started making various every-day metal objects that featured inlays. Among these objects are vases, mirrors, cigarette/tobacco cases, make-up cases, cufflinks and jewellery, mostly made for export and taking the shape of Western items. Komai Otojiro devoted himself to make higher-quality pieces for national or foreign exhibition to establish the Komai brand. His works were shown at foreign exhibitions, being very well received. Komai items were only produced for a limited amount of time and today they are rare collectibles.

The Komai family worked as a sword furniture maker in Kyoto for generations. Though the Komai firm is believed to had been founded in 1841 by Komai Seibei 駒井清兵衛, it was during the time of Komai Otojiro 駒井音次郎, regarded as the first-generation proprietor, that the workshop initially produced works displaying the renowned textured inlay in gold and silver, "Nunome-Zougan 布目象嵌".

It was in the 14th century that the Nunome-zogan technique was imported to Japan, which was invented in Damascus, Syria in the 12th century. Sword furniture in Muromachi period already applied this technique. At present the tradition of Nunome-zougan technique is surviving at Kyoto, Ishikawa, Kumamoto in Japan and Toredo in Spain. Each area in Japan has a very long tradition of sword furniture.

At the age of thirteen, Komai Otojiro had the opportunity to study inlay techniques with Misaki Shusuke 三崎周助, a sword-fitting artisan from Higo 肥後 (present Kumamoto). Otojiro produced sword fittings up until the 1876 Haitou-rei (廃刀令) prohibiting against wearing swords, but in 1873 he had already begun to produce decorative objects aimed at the export market.

Around 1873 Komai Otojiro started selling damascened ironwares in Kobe, a centre of foreign trade, and within a few years his chargers, plaques, cabinets, model pagodas, and vases were in such demand that he was prosperous enough to buy a large house.

In 1885 he lost his home and property in a fire. He had made large art objects - Okimono (置物) before the fire, but afterwards he started to make more practical low-price utensils like cigarette cases or jewellery boxes. This is due to the marketing strategy by Ikeda Seisuke 池田清助, a dealer marketing Komai's works exclusively. He intended to expand the target client segment to enhance the revenue by employing low cost workers under the well-known Komai brand. Otojiro devoted himself to making higher quality pieces for national or foreign exhibitions to establish the Komai brand.

His works were shown at foreign exhibitions, probably starting with the Nuremberg Metalwork Exhibition of 1885 where Japan was able to show 492 pieces and won the top prize. The name of Komai often appears in the lists of artists for international or national exhibitions. He won prizes at national exhibition (内国勧業博覧会) in 1903, Louisiana Purchase Exposition in 1904 and Exposition Universelle et Internationale de Liège in 1905. 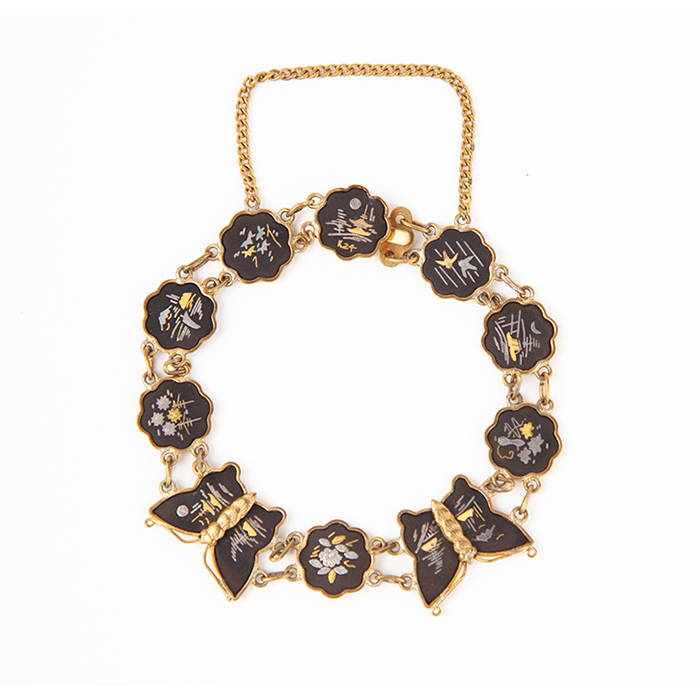 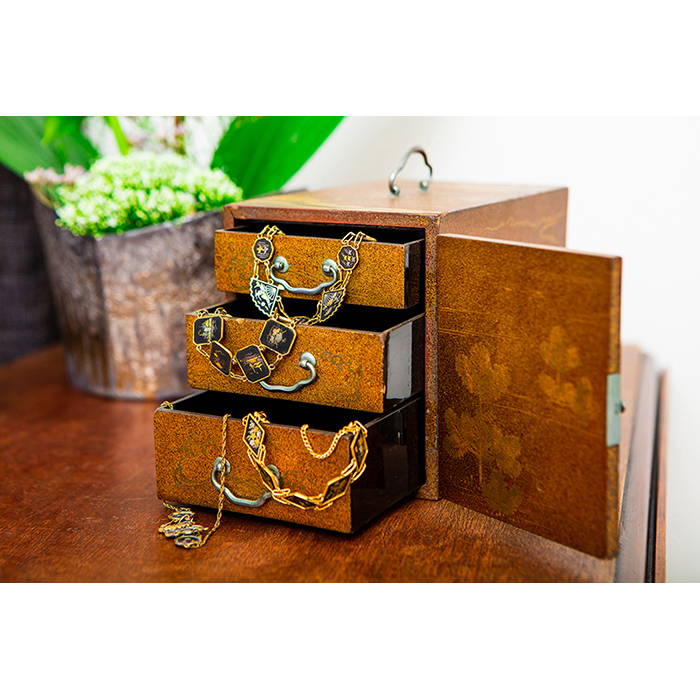 It was Ikeda Seisuke 池田清助, a dealer marketing Komai's works, who won a gold medal at the Paris Universal Exposition of 1900 for a plate of gold and silver which may well have come from the Komai workshop. Presumably because Ikeda Seisuke, a owner of Ikeda partnership corporation 池田合名会社, marketed most of Komai's work.

Komai Otojiro's delicate and highly detailed work was very well received abroad, and other artisans in Kyoto began to produce similar objects, for example, Okuno 奥野 and Asai 浅井. He retired in 1906 and referred to himself Shuryou 周亮. His son Seibei 清兵衛 (1883-1970) took the name Otojiro II, continuing to work until 1912. Otojiro II continued to submit Komai works to exhibitions - St.Petersburg in 1908, Seattle in 1909, Brussels and London in 1910 and Vienna in 1913.

It is thought that larger pieces such as model pagodas started to be made during the latter period of the company's activity; one pagoda was acquired by the Walters Art Gallery, Baltimore, in 1915. These pieces can be distinguished from early large pieces by Otojiro I by its applied techniques.

The Komai firm continued to produce metal work objects until 1941. At some stage, Seibei Komai started to sell pearl jewellery as an agent shop of Mikimoto Pearl Store (御木本真珠店). He needed a partner to promote his works to the overseas market instead of Seisuke Ikeda and also expand the products line-up in his shop.

Kokichi Mikimoto (御木本幸吉 1858-1954) succeeded to make the world's first semi-spherical cultured pearl in 1883 at Toba (鳥羽), Mie Prefecture and exhibited his pearl at World's Columbian Exposition (Chicago Expo) in 1893. In 1899 he opened Mikimoto Pearl Store at Ginza (Tokyo) and established Japan’s first full-scale jewellery production facility, Mikimoto Gold Work Factory (御木本金細工工場) in 1907. He opened the first overseas Mikimoto Pearl Store in London in 1913. Just like Otojiro, he had a strong ability of marketing to the affluent overseas clients.

After World War II, Komai shop specialised in the pearl trade and their marvellous textured inlay technique was lost forever.