Cel-ga (セル画) is the Japanese term for Celluloid Picture. This refers to the transparent material used to make frames of animation in the production of Japanese Anime shows. Each cel is one frame.

To create the illusion of movement, each drawing differs slightly from the one before it, then the completed cels are photographed one-by-one against a painted background by a rostrum camera onto motion picture film to produce the final animation. 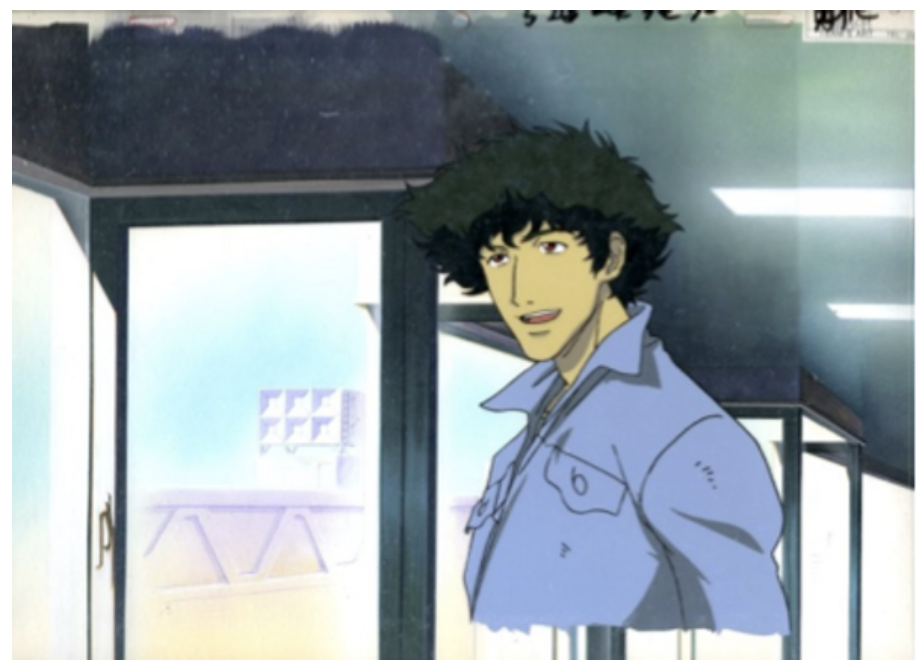 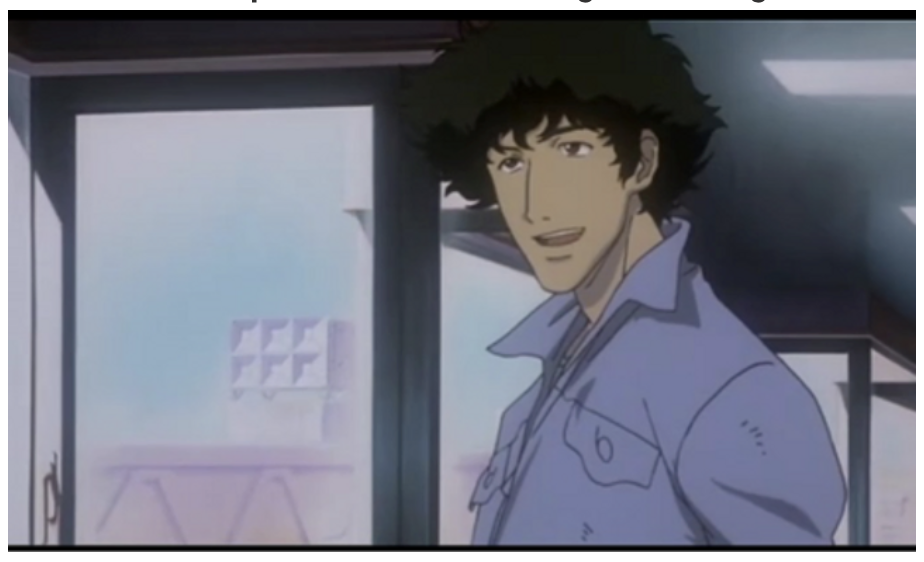 The completed product: A still from the animated film “Cowboy Bebop: Knockin’ on Heaven’s Door” showing the character Spike.

When creating the cel-ga, the frame is initially drafted out, then a cleaned up version of the sketch is made known as a dou-ga (動画). The accompanying sketch includes the outline of the image and instructions for the next artist for shading, colouring and framing of the shot. This pencil sketch is then placed underneath the celluloid and traced with ink. 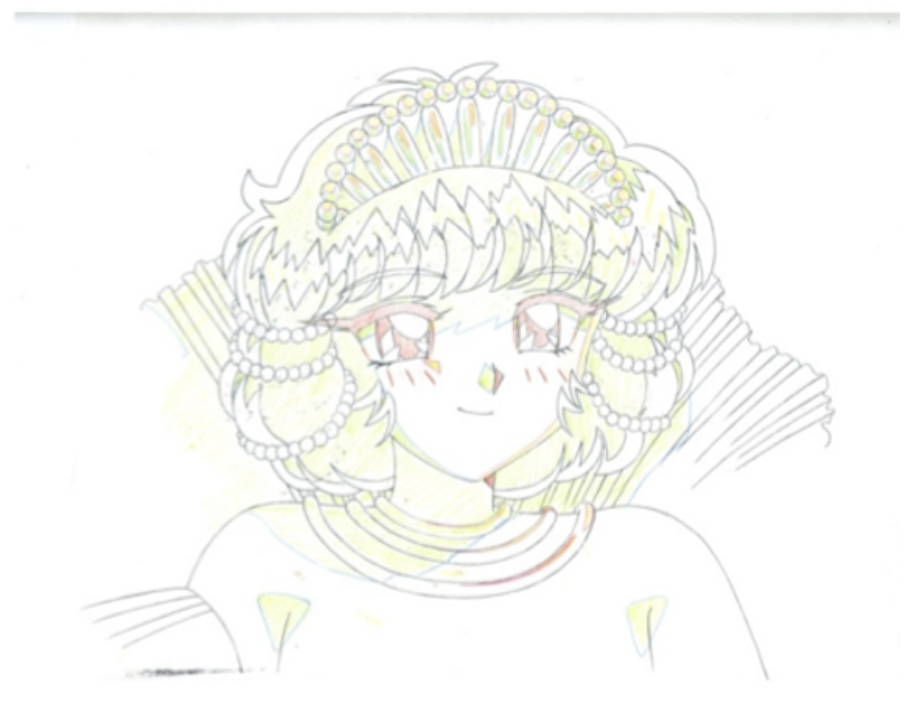 A Dou-ga sketch. The coloured sections on the drawing indicate areas of light and dark tones and changes in colour for the next artist.

Once the sketch has been traced, the image is then turned over and coloured in using acrylic paints on the back side. Usually, when painting cels, the first step is to paint one colour on all the cels from a sequence. The paints used in cel production are manufactured in slight variations of the desired colour in order to compensate for the extra layer of transparent cel added between the image and the camera; for example a slightly brighter colour would be used for a bottom layer cel to offset the dulling effect of the cels on top. 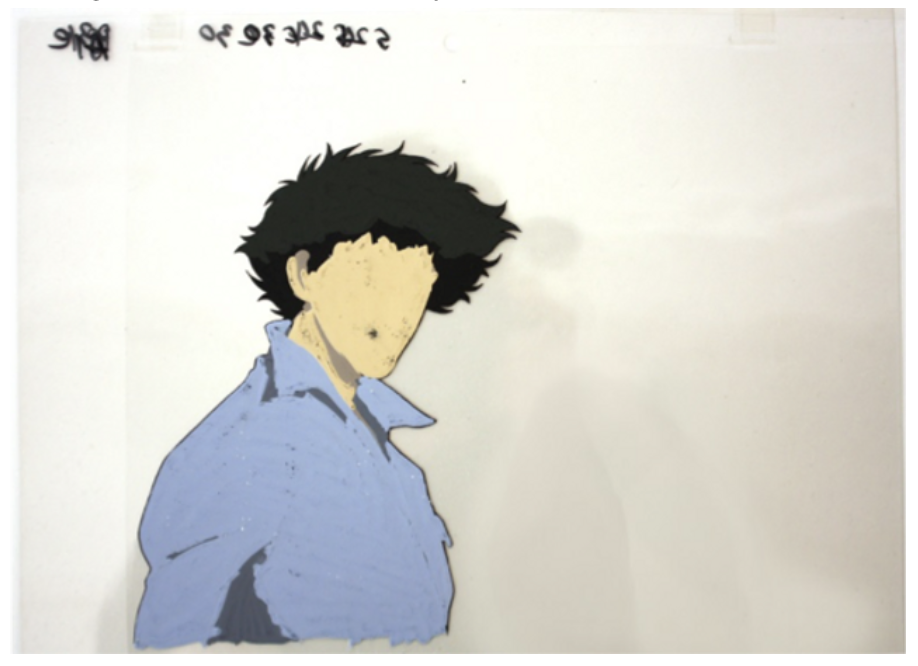 The rear side of a painted cel. By painting on the back of the cel as opposed to the front a smoother finish is achieved on the final image.

As the celluloid is transparent, they can be layered on top of each other for different purposes and effects. Typically they will be placed on top of a background to create the final scene.

Each part of the animation is broken down in many sequences, each representing a single action. The beginning of a sequence is referred to as a ‘key cel’ or ‘key frame’, and will generally be drawn by the main animators while the frames in-between are handled by other animation staff or sometimes outsourced.

As a result these key cels can be more valuable as they would have been created by more renowned artists. The rest of the cels in the sequence are created to smooth out the animation in-between the key frames, and the animators who handle this high volume job are referred to as ‘in-betweeners’. 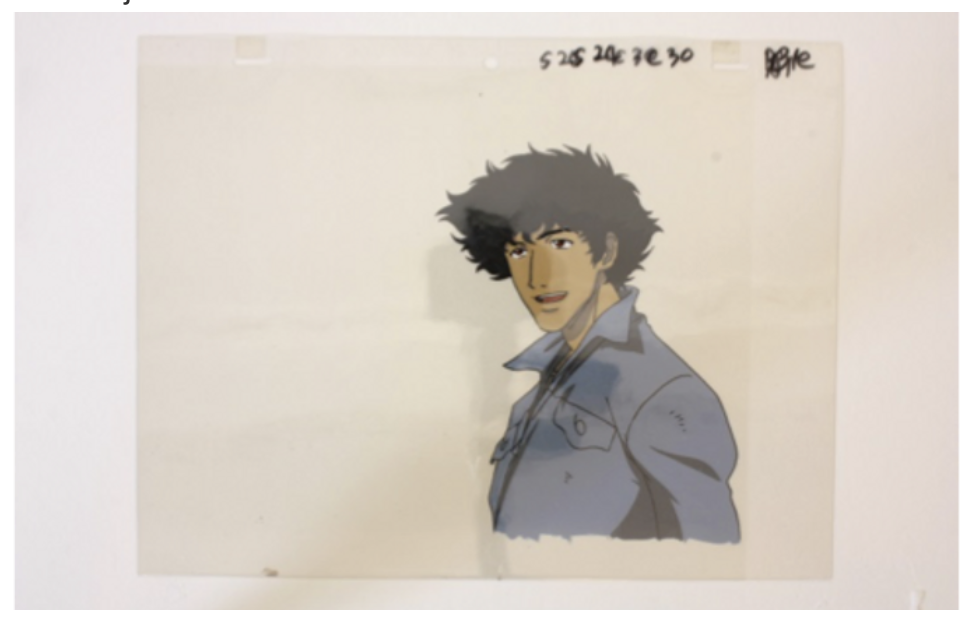 Final hand painted cels from Cowboy Bebop without the background. 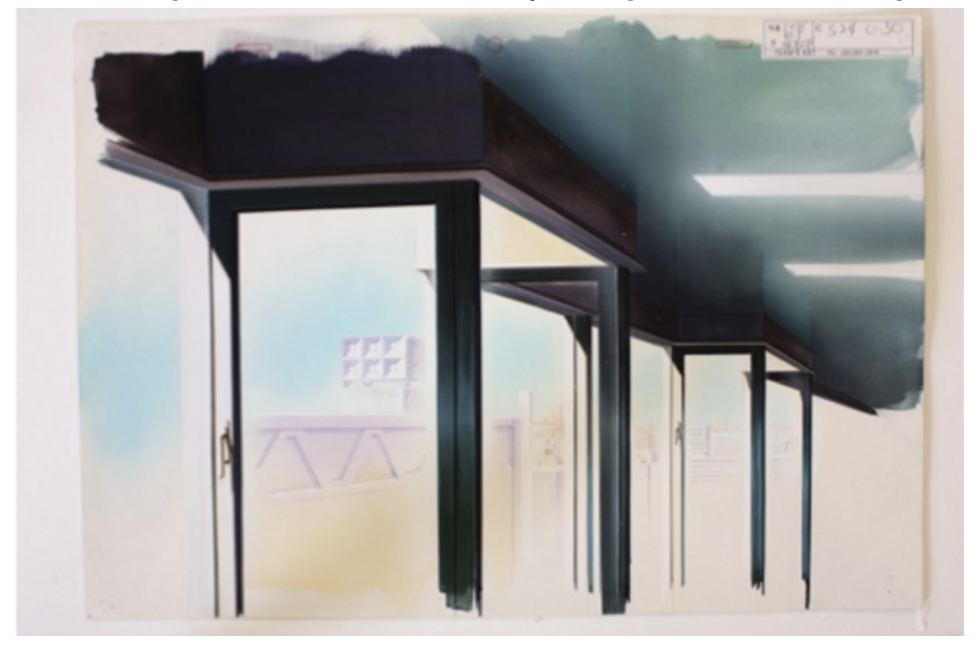 Accompanying hand painted background. Backgrounds were usually painted using watercolours onto cardboard. The background rarely comes with the cel as one background would be re-used for several sequences.

The information about a cel’s location in a sequence is contained in the top right hand corner of a cel, consisting of a letter and a number. The letter represents the layer of the cel, while the number is the position of the cel in the sequence. The first cel has the number "1". If the cel is the last in a sequence, "end" will be written next to it. The first and last cels in a sequence will generally be ‘key cels’.

For example, the cel here from “Super Pig” is marked as ‘A10’, meaning it’s the bottom layer cel and 10th frame in the animation sequence.  The Cowboy Bebop cel on the other hand has the marking ‘C1’. This means it is the first in a sequence for a top layer cel, which in this case is the movement for the eyes and mouth.

This is a common trick in animation where the lower layers of a cel the character will have blank features, allowed the movement of facial features to be superimposed on top to reduce the amount of drawing required for a scene.

This is a recurring feature in Anime production, as anime shows technically play at 24 frames per second, meaning that theoretically 28800 images would be required for a 20 minute show. In order to reduce this, the animators use several tricks so they can reuse certain drawings to lower time and costs required while maintaining the illusion of movement. A good example of this is with ‘Hold Cels’, which is a cel that is 'held' on the screen for a longer period of time than most cels. You can think of it as a 'still shot.' These are denoted by the cel’s number code followed by the writing 止メ(‘tome’).

The kanji for the 'to' in tome means 'stop' or 'hold' (it's the same kanji you see on the streets in Japan near intersections/stop signs). This can sometimes be accompanied by a voiceover of another character or internal monologue, or panning and zooming the camera to keep the viewers engaged despite there being a static image. The series ‘Neon Genesis Evangelion’ was notorious for making extensive use of cost cutting measures such as hold cels. 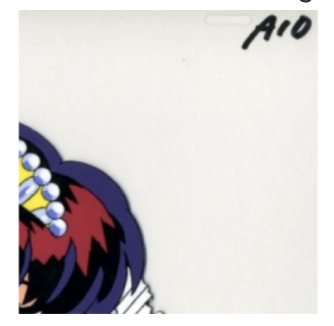 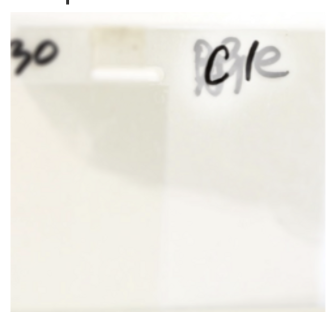 The majority of these production techniques have since been superseded by digital animation. The initial concept sketches and subsequent dou-ga are still done by hand, but rather than being painted on cels, they are now scanned and the rest of the production completed on computers.

This result is this process is much faster and cheaper to produce, but it makes the hand-produced items rare collectors’ items. The general transition point to digital took place after 2001, so more modern shows such as Naruto and One Piece will generally only have their sketches available.

This is also the case for some longer running series, such as Hunter x Hunter and Pokemon, whose earlier episodes will have been made using traditional techniques, but later shifted to the digital format for newer episodes after about 2001.

The exception to this is sometimes promotional cels that are produced by the relevant production studios (such as Naruto’s Studio Pierrot and Studio Ghibli) as one-off collectibles, but the key difference is these will not have been used in the production of show, and often the backgrounds will have been printed out as opposed to painted. 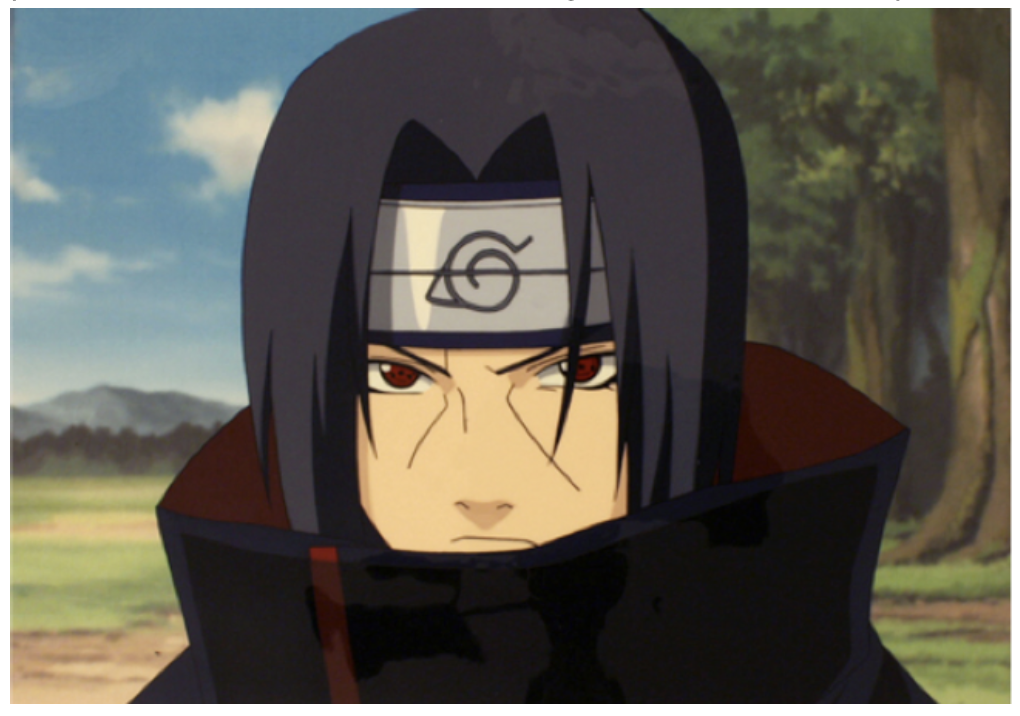 Hopefully, this information will assist you in buying Japanese Anime Cel-ga. Many online shopping sites such as eBay are prone to selling fake or unlicensed fan reproduction cels, as it can be difficult to verify the items without seeing it in person.

We have been dealing with original Japanese art since 1977 and have built a reputation in the industry. We can guarantee the authenticity of all items purchased, as they are sourced directly in Japan either from the production studios Intermediaries or vetted dealers.

Now that you have this knowledge feel free to take a look at our collection of cels here and see what new details you notice!