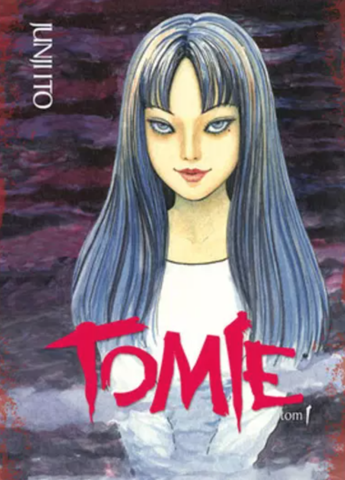 'Tis the season to be spooky, and to celebrate this oh-so-scary holiday we are starting our new series of highlighting prolific creators in the manga and anime industry by covering one of manga’s most prominent and well-known horror authors, Junji Ito. 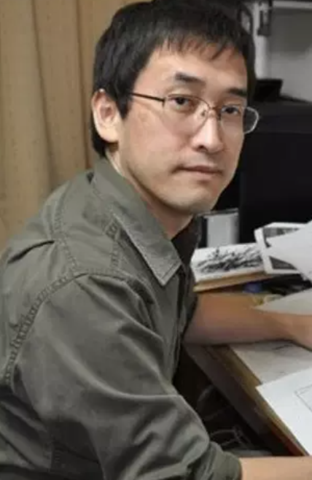 First, a little bit about the man himself. Itō Junji (伊藤 潤二;  full name in Japanese order) was born on July 31st, 1963 in the Gifu Prefecture of Japan. His early interests came from his older sister’s drawings, as well as the work of fellow horror mangaka Kazuo Umezu. He began writing and drawing horror comics as a hobby while working as a dental technician in the early 1990s (which likely had an influence in many of his work, as we’ll see), and his submission to the Monthly Halloween manga magazine earned him an honorable mention in the Kazuo Umezu prize, with Umezu himself as one of the judges.

Another major horror figure to heavily influence Itō is the US American author H. P. Lovecraft, famous for pioneering works of the cosmic horror genre (particularly his Cthulhu stories). Cosmic horror stories often focus on the bleakness of life and the cold universe, the hopelessness in existence, and the futility of human activity. Charming, isn’t it? These aspects have shown up in many of Itō’s own stories, where the universe is exceedingly cruel and capricious, and his protagonists find themselves victims to malevolent natural and supernatural forces due to no fault of their own.

But even more than cosmic horror, Itō’s work shines darkly as a victorious example of another horror subgenre: body horror. To quote TV Tropes, body horror is:

If you’re familiar with films such as Ridley Scott’s Alien (1979), John Carpenter’s The Thing (1982), or David Cronenberg’s The Fly (1986), then you already have an idea of what body horror is like. In each film, the character’s bodies undergo very gruesome and painful physical transformations or disfigurement, none of them voluntary. Itō’s own works capture body horror very well as he puts his protagonists through all sorts of unnatural, horrifying, and downright bizarre transformations, so let’s take a look at some of his most notable works. Don’t worry, we won’t be showing you any visceral images, though rest assured they are by no means in short supply when it comes to Junji Itō.

Itō’s first big hit, Tomie is a traditional Japanese ghost story heavy on the psychological aspects of horror. It follows the titular character Tomie, a supernaturally beautiful young woman with long wavy dark hair and a beauty mark beneath her left eye. Anyone who gazes upon her fall prey to a mad and murderous infatuation with her, and she knows it. Tomie moves from city to city, wreaking all kinds of havoc in pursuit of her own mysterious ends. And though multiple attempts at her life have been made, she also seems to possess a disconcerting ability to come back to life from any of her severed body parts or even cellular tissues, resulting in numerous monster-like regenerations.
Winning Itō a Kazuo Umezu Prize, Tomie is an anthology focusing on different short stories in each chapter, all linked by the charming seemingly-human woman that is Tomie. Much like James Cameron’s Terminator, the fear in Tomie is in knowing that no matter what you do, Tomie will always come for you and come back for you. Always. Worse, she has no shortage of means of spreading herself onto other humans, and her cannibalistic tendencies as well as parthenogenetic reproduction provide much of the body horror Itō is eventually known for (such as Tomie growing extra heads from her wounds). Being such a beautiful woman, Tomie also stands as a demonic personification of lust and obsession, and all the negative ramifications that come with them; Tomie herself in fact is a vain and greedy materialist, often hurting people for nothing more than money and valuables. The story is ripe with interesting food for thought about society, as all good horror stories do. If you’re a fan of Japanese horror movies starring stringy-haired ghostly women in the vein of The Ring or The Grudge, you’ll definitely get a kick out of Tomie. 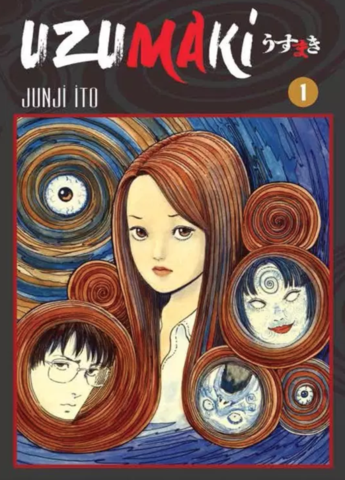 Probably Itō’s most famous work is this three-volume horror manga about, of all things, spirals. The title itself literally means ‘Spiral’, and no, it has no relation to a certain orange-clad ninja you’re probably thinking about. The story is set in the small Japanese coastal town of Kurôzu-cho and follows two teenagers, Kirie Goshima and her boyfriend Shuichi Saito. It all began with Shuichi’s father becoming obsessed with spiral patterns, ranging from conch shells to swirling udon soup to the motions of pottery-making. He commits suicide not long after in a very unusual fashion, and following his cremation Shuichi’s mother (who has developed a phobia of anything spiral-shaped in the meantime) soon follows her husband into death. Then, slowly but surely, the citizens of Kurôzu-cho become swallowed in a curse that relentlessly draws people in and does not ever let any of them out. This ranges from physical manifestations such as hair curls (as seen above), wind twisters, and the staircase of the local lighthouse, or metaphysical manifestations such as the pace of life and the feeling of falling into paranoia and depression. And in the spirit of body horror, numerous Kurôzu-cho’s citizens transform excruciatingly into giant snail-people, starting with (what else?) their spiral shells. And these are the lucky ones; others become much, much worse things.

While the concept might sound silly at first, there is nothing even remotely amusing about the execution. The spiral is one of the most recurring patterns in nature, and even in Japanese visual culture the spiral is a cartoonish symbol often associated with warmth and cuteness (think of a spiral cheek blush in anime). By taking the spiral imagery as a starting point and pushing it to its absolute logical extreme, Itō takes us on a journey through an impersonal and thoroughly unhuman void that feels terrifyingly familiar, simultaneously natural and unnatural. Itō also manages to creatively incorporate spiral imagery everywhere in the manga, many from places you wouldn’t normally even think twice about. If you’re looking for a horror story heavy on symbolism, look no further than Uzumaki. Although, fair warning: you probably won’t be able to look at cinnamon rolls the same way again for a long time. Or snails, for that matter. 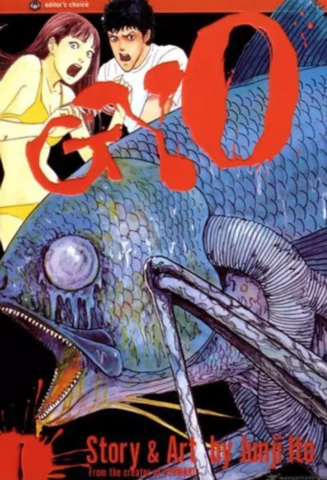 Where Uzumaki explores one of nature’s favourite recurring patterns, Gyo is set firmly in a familiar genre of horror: the zombie apocalypse. More specifically, a fish zombie apocalypse. You read that right; Itō has a fondness for deep sea creatures and he puts it to disturbingly good use in this two-volume manga. The story follows two teenage lovers, Tadashi and Kaori, on their vacation to Okinawa. Kaori, who has a hyper-sensitive sense of smell, picks up a noxious odour from the sea, and soon the two are assaulted by an onslaught of fish and cephalopods crawling onto the surface on what look like robotic metal legs. Later, the story moves to Tokyo, where things become much worse and revelations are made about what could be causing this all-consuming wave of the dead from the deep. And you can be sure that the zombie-ism eventually spreads to humans too.
Gyo has all the elements of any good zombie apocalypse story: a ravenous horde of dead creatures, the breakdown of social order, and the folly of humans in mad scientific pursuits. Itō’s art is intense and unrelentingly detailed, the love between Tadashi and Kaori can surprisingly wrench your heart, and when people’s bodies start turning in ghoulish ways (because of course they do...) you’ll be glad we recommend you don’t eat or drink anything while you read the story, and we really do recommend it. There’s also a hint of mysticism, but the story remains vague enough that you could conceivably chalk that up to the sheer madness the characters eventually go through. Even better: there’s an anime OVA version of the story, animated by ufotable (the lovely people behind Kara no Kyōkai and Fate/Zero)! Zombie apocalypses are familiar to us all, and Itō reinvents the genre and breathes noxious new life into it while staying true to its horrifying strengths.

4. The Enigma of Amigara Fault

No cover image this time, because unlike the three stories we’ve talked about Enigma is not a full-blown manga series, but a short story; it’s a one-shot bonus chapter included in the second volume of Gyo. Don’t let its length fool you, though; it is often placed among Itō‘s best work. The story is as follows: an earthquake in an unnamed Japanese prefecture has exposed a fault in the Amigara mountain. Curiously, this fault is littered with human-shaped holes, which of course garners national interest and is covered by the media. How did these holes come to be? Were they manmade? If so, who made them and why? Two hikers, Owaki and Yoshida, meet on the mountain to see these holes for themselves (as do dozens of other interested hikers), but for some strange reason Yoshida is looking for a hole that’s shaped perfectly like herself... Could there be such a hole?
We won’t spoil the rest of the story, but we do urge you to check it out for yourself. It is by far the least gruesome of all of Itō’s works, so it is likely the best entry point to his stories as even the squeamish can read it without fear of being disgusted by anything. There’s no blood or gore in the story whatsoever; the fear this time around comes from your own imagination of what happened ... and what could happen. Instead of twisted symbols or deathly creatures, here Itō works with pure undiluted claustrophobia. It’s probably also worth mentioning that Enigma is undoubtedly the most memetic of Itō’s works, so that’s another unintended plus for those of you living the meme life! If you’re on the fence about whether to read any of the other manga we’ve talked about today, we highly recommend you give The Enigma of Amigara Fault a go as a small but delightfully dreadful taste of the world of Junji Itō.
Share