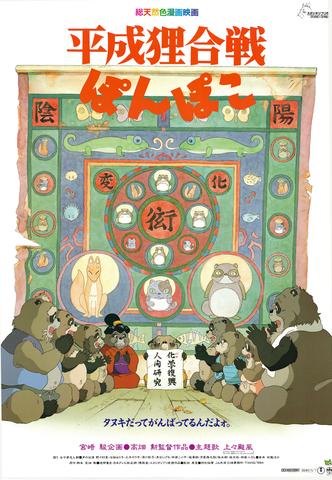 Japanese Folklore – Yokai: The Kitsune and the Tanuki

Shapeshifting magical animals are a staple of folklore of cultures around the world, and Japan is no different. As two of the most iconic and well-known yōkai, the kitsune and the tanuki hold an important place in Japanese culture, and today we’ll be taking a more in-depth look at these two mystical masters of mischief.

From the tales of Native America, Western Europe, and all the way to East Asia, foxes have developed a reputation as sly tricksters, as mischievous as they are mysterious. In Japan, it is believed that the tail of a kitsune (キツネ; Eng: fox) splits with time, and the number of tails it has indicates its age, wisdom, and power. A kitsune can have as many as nine tails (known as the kyūbi no kitsune, 九尾の狐; Eng: nine-tailed fox), with a new tail splitting off every 100 years. Japanese folklore does not traditionally distinguish between normal and paranormal foxes, as normal foxes are simply young and immature kitsune which have yet to fully awaken their supernatural abilities. These include possession of humans, creating illusions, knowledge of many things, breathing spectral fire, and most notable of all, shapeshifting. 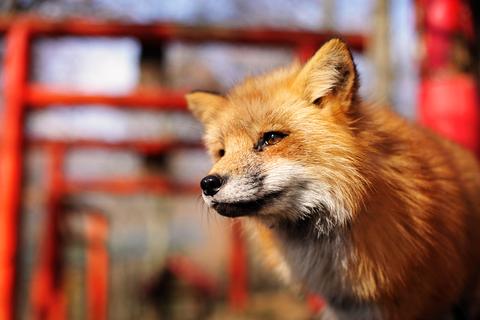 Popular portrayals of kitsune both classical and modern often depict them changing their shape for various purposes, usually to trick people. The shapes they take can vary, though more often than not it’s the guise of a beautiful young woman. In fact, in many a story female kitsune marry unwitting human men and become loving wives and devoted mothers, and children born of these pairings are reputed to have powerful divination abilities themselves. If a kitsune is startled, inebriated, or caught unawares, some foxy features (such as a tail or fangs) may appear, and spotting these is how one could spot a kitsune in disguise. And while they love playing pranks, kitsune are not necessarily evil, as each individual kitsune has its own disposition and can be anything between benevolent and nefarious. One significant tradition maintains that some kitsune are under the employ of Inari, the god of agriculture and land fertility in the Shinto faith, and shrines dedicated to Inari (such as the famous Fushimi Inari shrine in Kyoto) often feature fox imagery. These kitsune are pure white, and act as both Inari’s messengers and spiritual guardians for local people. Other kitsune can have more wicked intentions, playing cruel tricks on poor farmers or monks or even possessing them and making them behave in abnormal ways. 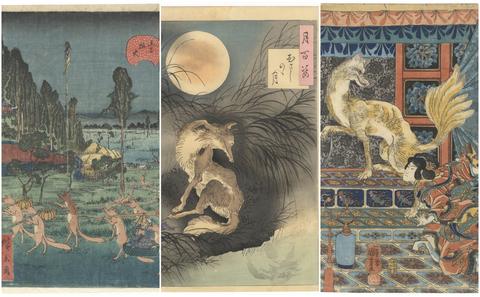 As one might expect, kitsune often play a very important role in anime and manga. For example, Yu Yu Hakusho gave us the powerful Kurama as one of the main characters, a mystical fox demon said to be over 1000 years old. This, in turn, inspired Kurama, a mystical fox beast that possessed a young ninja with foxlike features and a penchant for pranks named Naruto Uzumaki. You may have heard of him. There’s also the orphan Shippou, a young shapeshifting fox yōkai and one of the main characters from InuYasha. Kitsune aren’t always one of the good guys, though: Kuyou, for example, is the first major antagonist of Rosario + Vampire, and both Hakumen no Mono from Ushio and Tora and Hagoromo-Gitsune from Nura: Rise of the Yōkai Clan are some of the biggest villains in their respective series, all of whom have the powers and characteristics of the kitsune. There’s also no shortage of female characters that are metaphorically described as kitsune either, such as the prankster Konno Mitsune in Love Hina or the beautiful Takani Megumi in Rurouni Kenshin. Additionally, there are many kitsune representatives in other Japanese multimedia franchises, including Vulpix and Ninetales in Pokémon and Renamon and Kyubimon in Digimon. 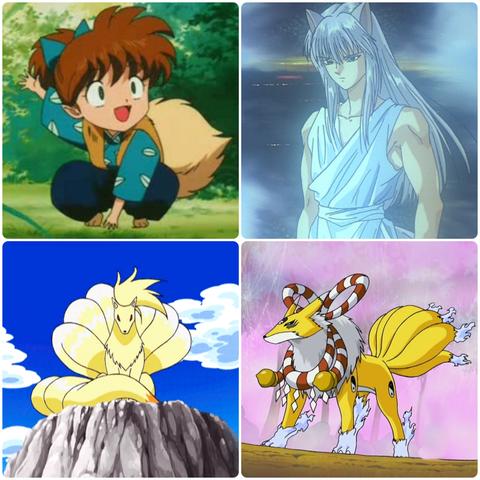 A few kitsune representatives in anime. Clockwise from top left: Shippou from InuYasha, Kurama Youko from Yu Yu Hakusho, Kyubimon from Digimon, and Ninetales from Pokémon. The bottom two are examples of the Nine-Tailed Fox.

On the other side of the grassy fields, we have the tanuki (たぬき). While the word today is most often used to refer to the Japanese raccoon dog – based on the usage of the modern Tokyo dialect – in different regions of Japan it has also been used to describe a badger, a civet, or even a wild cat in older sources. Either way, it’s important to note that the animal known as a tanuki is emphatically not what English speakers would call a raccoon, despite the surface similarities and popular misconceptions. 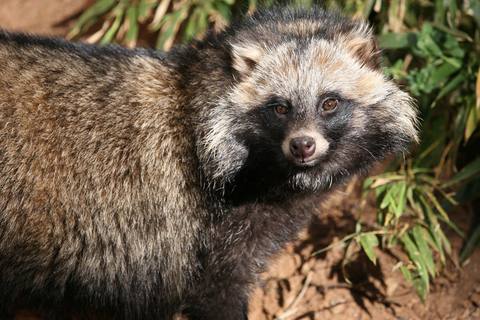 Tanuki are widely believed to be very playful and jolly. Often associated with good luck, they love to party, drink sake, and play tricks with each other as well as on unsuspecting humans, all in the name of good fun (though older tales tell of far more wicked tanuki, modern commercialisation has transformed them to much cuter and whimsical creatures). These masters of shapeshifting typically use a leaf on their forehead to transform, an imagery that you may have seen in Japanese art. Speaking of leaves, tanuki have a habit of disguising themselves as humans to buy alcohol with money that is, in actuality, a bunch of leaves they have magically transformed to look like money. The hapless alcohol seller would only find out after the fact! Tanuki who have changed to a human form often have dark rings around their eyes, marking their true nature as raccoon dogs. When in their natural form, modern portrayals depict tanuki as having eight distinct characteristics, called the Tanuki Eight Virtues. These are: a smiling face, a sake flask, a straw hat (to protect them from bad weather or trouble), a notebook of promises (representing trustworthiness), big eyes (with which they expertly perceive their surroundings), a big tail (symbolising strength and steadiness), a big belly (which they are reputed to drum in the middle of the night), and an oversized scrotum. 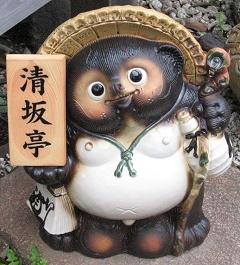 The stereotypical modern look of a tanuki. Note what seem to be feet at the base.

No discussion of the tanuki can be complete without their most prominent biological feature: their comically large testicles (金玉, or kintama, which sounds very close to the Japanese phrase for ‘ball of gold’ and is the source of many a joke in the Japanese language). A real raccoon dog’s scrotum is already rather large, and depictions of tanuki both classical and modern exaggerate this aspect for comedic effect. It isn’t uncommon to see tanuki in media transforming their testicles and using them for a variety of purposes, including comfort, pranks, and fights. There is even a popular children’s song singing about how the tanuki’s testicles sway even on windless days! As you may imagine, this causes more than a few headaches during localisation efforts outside Japan. It should be noted, however, that the tanuki’s oversized testicles actually represent good financial luck (hence the ball or nugget of gold) and has nothing to do with sexuality.

We’d be remiss not to mention Studio Ghibli’s Pom Poko, an anime film featuring a community of tanuki using their transformation powers to struggle against human development. The film, lovingly directed by the late Isao Takahata, includes every bit of traditional tanuki lore you can think of, and then some (even the title references the sound tanuki’s belly-drumming would make). Yōkai-heavy works often feature characters based on the tanuki, such as the shapeshifting Hachi in InuYasha or the mischievous Ponchi in Shaman King. Both the titular character of Doraemon and Chopper from One Piece are often mistaken for tanuki, much to their annoyance. On a less friendly note, Naruto’s Shukaku is a gigantic monstrous tanuki who despises humanity, and possessed a young ninja by the name of Gaara (note the dark rings around Gaara’s eyes, evoking tanuki imagery). In other media, a tanuki named Tom Nook is a major recurring character in Nintendo’s hit franchise Animal Crossing, and gaming icon Mario can use the Tanuki Suit to transform him into a, well, tanuki. Even Disney’s gotten into it: their film Zootopia (Zootropolis in European territories) has a tanuki as a newscaster in the Japanese version.

As mischievous and magical shapeshifting animals, the kitsune and the tanuki obviously have a lot in common, and indeed they are often paired in Japanese culture. The kanji for kitsune (狐) and tanuki (狸) together create 狐狸 (pronounced kori), which is a metaphor meaning ‘sly person’, and if you put the kanji for dog (狗) in the middle, it creates kokkuri (狐狗狸), which is a Japanese divination game akin to modern Ouija boards. More often than not, the kitsune and the tanuki are contrasted with each other. It is popularly believed that the kitsune is more magically powerful, but the tanuki is more skilled at transformations; one common Japanese saying goes that the fox has seven disguises, but the tanuki has eight. A recurring motif is to portray the kitsune as classy and elegant (if a bit of snob), and the tanuki as jovial and party-loving (if a bit of a slob). Furthermore, to say that someone is tanuki-faced (having a square-ish or rounded face) means they look like a silly animal, whereas to say someone is kitsune-faced (having a triangular or heart-shaped face) is a very sultry compliment, indeed. And for fans of Japanese food, tanuki udon contains flakes of tempura batter, while kitsune udon contains fried tofu. 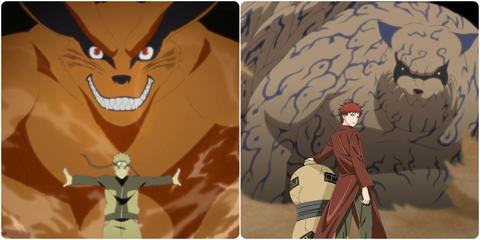 There is no shortage of kitsune-versus-tanuki battles in Japanese folklore, such as the tale of Danzaburo-Danuki. In anime and manga this rivalry translates to, for instance, Gaara (tanuki) being introduced as Naruto’s (kitsune) dark counterpart in Naruto, the kitsune adapting to human development as opposed to the tanuki's resistance in Pom Poko, or Shippou the kitsune getting angry at being referred to as a tanuki in InuYasha. With the sly fox and the rascally raccoon dog, it would be wise keep your wits about when walking around in wondrous Japan.