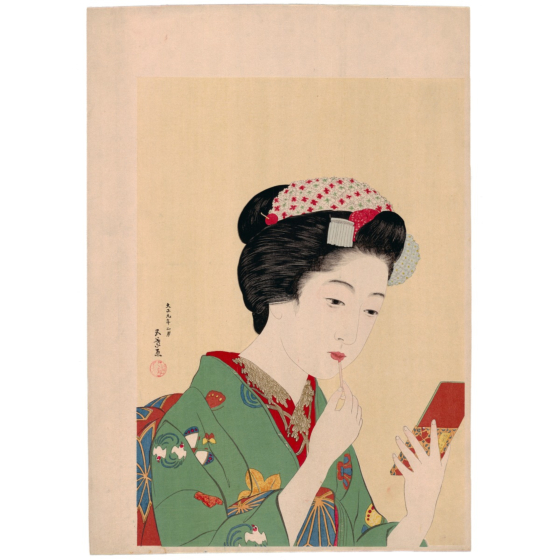 Goyo Hashiguchi, a painter and printmaker, was one of the key artists of Shin Hanga (New Print) movement. Goyo published polychrome woodblock prints typified by “Woman Applying Make-up” and was renowned as “Utamaro of the Taisho era”. Meanwhile he also exerted himself to the project of Ukiyo-e masterpiece reproductions in order to popularise Ukiyo-e. Despite a small number of his works (only thirteen O-ban size prints), with its elegance and a great deal of subtlety, his beauty images have made Goyo highly appraised as one of the best Taisho artists in both Japan and overseas.

In this print, a young maiko (geiko apprentice) is seen here applying her make-up while looking into a small portable mirror. Her hair has been carved with exquisite detail and skill and is done in the traditional style of a young apprentice.

In the genre of Japanese Art, Goyo Hashiguchi was a painter and printmaker and one of the key artists of the beginning of the 20th century in Japan. Born in Kagoshima, he received an early influence in the arts from his father who dabbled in painting. It is believed that at the age of fourteen Goyo studied locally with the Kano painter Uchiyama Ikkan (1823-97). In 1899, he moved to Tokyo where he studied nihonga and yoga styles of painting. In 1904 he began to receive commissions for illustrations, lithographs and woodblock printed covers particularly from literary and art magazines. Some of his works appeared on book covers by popular writers of the day such as Natsume Soseki and Tanizaki Jun’ichiro. In 1911 he won a poster competition for the prestigious Mitsukoshi department store with a design of a young woman dressed in kimono with a fashionable contemporary pattern and sporting an up-to-date hairstyle. From then onwards, Goyo became more interested in traditional ukiyo-e forms from the Edo period with admiration for artists such as Hiroshige I Utagawa, Suzuki Harunobu and Kitagawa Utamaro.

In 1915, urged by the shin-hanga publisher Watanabe Shozaburo, he designed a print for artisans to produce under Watanabe’s direction. ‘Woman at Her Bath’ became an iconic design. Without the use of shading and using only defined lines, Goyo masterfully depicted a woman's body and graceful charm. After deepening his understanding of the production process of woodblock prints, he decided to self-publish his own designs. His craftmanship was of extremely high standard from the paper he chose to the lush pigments applied. He also drew from live models, capturing women and their gestures in a pensive, almost meditative state.

His body of work only amounts to a handful of woodblock prints, as the artist met his untimely death at 41 years old following a sudden illness. Despite this, with their elegance and a great deal of subtlety, his pictures of beauties have made Goyo highly appraised as one of the best Taisho artists in both Japan and overseas.