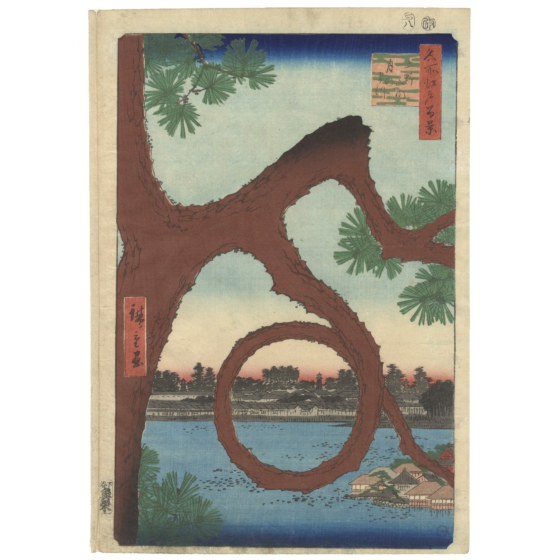 Used as a model for Vincent van Gogh's experimentations with Japanese composition and colour palette, this famous installment of the Moon Pine at Ueno in Hiroshige's One Hundred Famous Views of Edo boasts a striking visual arrangement undoubtedly unique to the eyes of European artists at the time. Three clusters of pine needles occupy the corners and sides of the view, counterbalanced by three strands of bokashi gradation to depict the deep river blue, the setting sun, and the darkening sky. The area by the shrine of Benzaiten was known for circular contortion of the moon pine's branch. Acting as a lens, through the pine it was said that one could see the various phases of the moon.

Hiroshige I Utagawa was a woodblock print artist best known for his landscape prints and considered as one of the greatest Japanese artists in ukiyo-e history to have influenced Western impressionists, such as Van Gogh and Claude Monet. Born in Edo (today’s Tokyo), he started sketching from an early age and was later accepted into Toyokuni I Utagawa’s highly successful studio mostly under the guidance of Toyohiro Utagawa (1773-1828), from whom he would adopt his art name. He also took nanga painting lessons that had a great influence on his later work.

In 1831 his first landscape series ‘Famous Places of The Eastern Capital’ (Toto Meisho) was published and the following year Hiroshige passed on his family responsibilities to his relatives to dedicate his entire energy to printmaking. In 1832, it is said that Hiroshige was appointed by Bakufu, the feudal government of Japan, to accompany an official procession from Edo to Kyoto along the Tokaido road. The artist made many sketches during this journey, resulting in the production of his most acclaimed series ‘Fifty-three Stations of the Tokaido Road’, although some of the designs are based on older available images. To be noted that it was rare for an artist (and regular people in general) to be able to travel and sketch landscapes from life during the Edo period, which makes some scholars believe that Hiroshige depicted most scenes entirely from his imagination.

The ten-year period of 1833-1843 is thought to have been Hiroshige’s most developed and innovative time as an artist. A lot of series that were produced during this time, such as ‘Sixty-nine Stations of Kisokaido Road’, ‘Eight Views of Omi’ and ‘Famous Places of Kyoto’, would lead to the peak of his career when he produced the ‘Famous Views of the Sixty-odd Provinces’, ‘Thirty-six Views of Mt Fuji’ and his last great series, ‘One Hundred Famous Views of Edo’. In addition to his landscape prints, Hiroshige also designed kacho-ga (pictures of birds and flowers), bijinga (pictures of beautiful women), yakusha-e (pictures of actors), warriors and historical subjects.

Hiroshige’s prints are particularly sought for their perspective and excellent bokashi (colour gradation). Careful overprinting and shading of colours bring to life many natural elements such as the sky or water, rocks and mountains. An appreciation for wood pattern can also be noted in Hiroshige’s prints, with certain designs showing a unique texture and an organic quality deeply cherished by collectors. As many other reputable artists, he also had many students, some of the most famous being Hiroshige II Utagawa and Hirokage Utagawa.