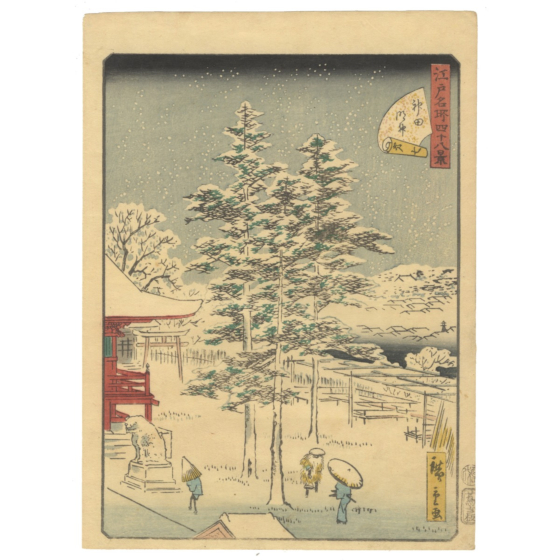 As with many of Hiroshige II's prints, those comprising the series 'Forty-Eight Famous Views of Edo' borrowed compositional elements from his teacher Hiroshige I Utagawa. At this point, he had just started using his teacher's name that recently passed away, therefore the prints in this series are signed 'Hiroshige'.

In order to accommodate the expansion of Edo Castle, Kanda shrine was moved to the former Kanda ward in 1603 from the fishing village of Shibasaki. In this print, tall pine trees take the centre view while only a small corner of the shrine is captured on the left. The scene is a peaceful one - it is snowing heavily and the city in the foreground seems to have blended with the white tone. Only a few visitors are seen nearby, fending off the inclement weather with their umbrellas. Hiroshige II uses a printing effect earlier seen in his teacher's designs, with blank areas around objects to suggest heavy snow.