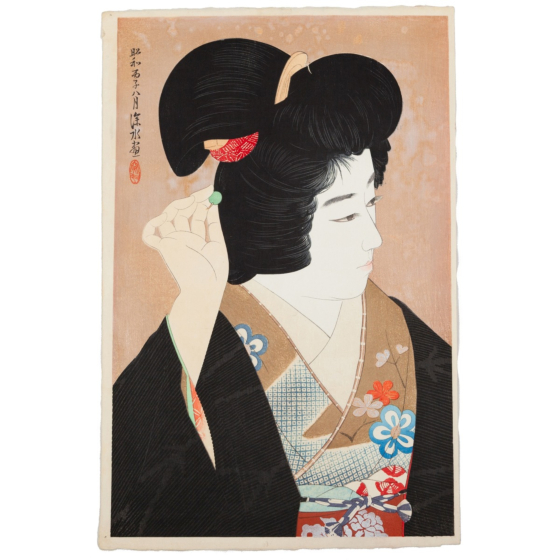 A closeup portrait of a beauty turned slightly towards her left. Her gaze elsewhere, Shinsui captures his model dreamily adjusting her green hairpin. The tameshizuri [lit. test print] seal on the back indicates the use of this print in the preliminary stage of Shinsui and his publisher Watanabe's collaboration for this design. Both rigorous with their desire for quality, the pair often went through the expensive process of testing and reworking their designs before publishing. Although, here the application of mica powder and the embossed sekigaha wave pattern on the inner layer of the model's kimono, place this trail edition close to the completed work. There are only a few discrepancies: the areas of black ink are rendered more thickly in the final version, masking the lighter white strokes of the model's hair. Furthermore, the preliminary print shows the model without rouge, leaving her face entirely white with oshiroi makeup.

Shinsui Ito is regarded as one of the most significant woodblock print artists of the shin-hanga movement and is considered as one of the last to be influenced by the traditional ukiyo-e (woodblock print) style particularly in the subject of bijinga (beautiful women). Born Hajime Ito in Tokyo, he was passionate about art from an early age and became a student of nihonga under the guidance of painter Kaburaki Kiyokata. Difficult family circumstances pushed him into hardship, although his determination to continue studying made him work during daytime and attend night school afterwards. His diligence earned him the nickname ‘Shinsui’ (‘Deep water’).

At the age of eighteen, Shinsui joined the shin-hanga movement, which included major artists such as Hasui Kawase (1883-1957) and Goyo Hashiguchi (1880-1921). Established by the publisher Watanabe Shozaburo (1885-1962) the movement aimed to revive the older structure of ukiyo-e production and its collaborative process. Although many of his early works were direct reflections of traditional ukiyo-e both in subject matter and in style, his technique was revolutionary. Shinsui would paint a ‘master painting’ in watercolours, and dedicated craftsmen would make the actual prints from this ‘master copy’.

Most of Shinsui’s beauty prints show a simple yet rich palette of colours, usually in the clothes of the model, while contrasting white translucent skin and jet-black hair. This striking composition and a strong use of line became the embodiment of the shin-hanga aesthetic, borrowing from the Edo-period tradition and adding a modern dimension to it. A long process of experimentation and trial printings enabled both Shinsui and his publisher to create powerful expressions, deep textures and a transparency that could not be conveyed in painting. The collaboration continued into the 1960s to great success.