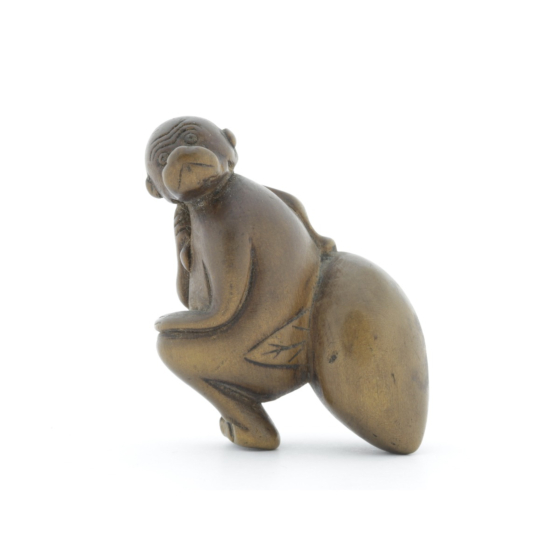 This netsuke is made entirely out of wood and depicts a monkey sitting on a peach. A peach is a symbol of longevity and it is said to get rid of devil spirit.

In ancient mythology in China, the Chinese goddess Xi Wangmu planted long-life peach trees in the mountains. On her birthday, the peaches were prepared for her celebration, but a monkey came down and ate them. Though this monkey gained the elixir of life, it was imprisoned under a huge stone as a punishment. 500 years on, the monkey was saved by the monk Xuanzang, and later accompanied the monk on a journey to retrieve Buddhist sutras from India. This monkey is called Sung Wukong as known as Songoku in Japanse and the story is a start of the famous novel, ‘Journey to the West’.

Netsuke were practical fashion accessories worn by Japanese men of the Edo period (1615-1868). Kimono has no pockets, and only women's garments had places in the sleeve to keep small objects. In contrast, men would carry their personal accessories by hanging them from the sash wrapped around their waist. Netsuke would therefore act as a 'toggle' that kept the sash hanging by preventing it from slipping.

Like many other art forms, netsuke reflect the nature of the society that produced them, displaying every aspect of Japanese culture, including its rich folklore and religion, crafts, trades, and professions, all types of people and creatures, both real and imagined, and every kind of object.