Gishi-sai is an annual winter festival held at Sengaku-ji Temple in Tokyo. It honours 47 brave rōnin (浪人, masterless samurai) who gave their lives to avenge their lord and master in an event known as the Genroku Akō Incident (元禄赤穂事件 genroku akō jiken) which took place between the years 1701-1703. On December 14th of each year, 47 individuals, each representing one of the loyal rōnin, lead a procession known as the gishi gyōretsu (義士行列, procession of the loyal retainers) to commemorate their virtue and sacrifice.

As the story goes, in 1701, Lord Asano Takumi-no-kami Naganori of Akō along with another daimyō (feudal lord) were called upon to take part in an official ceremony. In preparation for the ceremony, they were placed under the instruction of the kōke (master of ceremonies), Kira  Kōzuke-no-Suke. As the days passed, Kira became increasingly annoyed and dissatisfied with Lord Asano and began to insult and humiliate him. On the one hand, it is believed that Kira was dissatisfied with a gift Asano had given to him. It has also been suggested that Kira had wanted a bribe that Asano had refused to give to him. Kira continued to express his anger at the expense of Asano. However, after a particularly stinging insult, Lord Asano could suffer the humiliation no longer. He drew his blade and charged towards Kira, wounding him. Drawing his weapon inside Edo castle carried severe consequences. Asano was stripped of his rank and status as a samurai and was ordered to commit seppuku (ritual suicide by disembowelment) that same day. He had brought dishonour to his family and household, plunging them into ruin.

A few days later, news of the incident reached Akō. Asano’s chief retainer, Ōishi Kuranosuke made the necessary arrangements to relocate the Asano family and handed their land over to the authorities. Following this, he gathered a band of Lord Asano’s samurai who, having now lost their lord, had become rōnin. They swore an oath to avenge Asano, knowing that such a deed would likely result in their deaths. Kira Kōzuke-no-Suke had considered this, fortifying his family residence whilst hiring spies to monitor the activities of the Akō clan. In order to lower the guard of the wary Kira, the Akō rōnin set about on a life of debauchery, heavy drinking and reckless spending to conceal any hint of their plans for revenge. 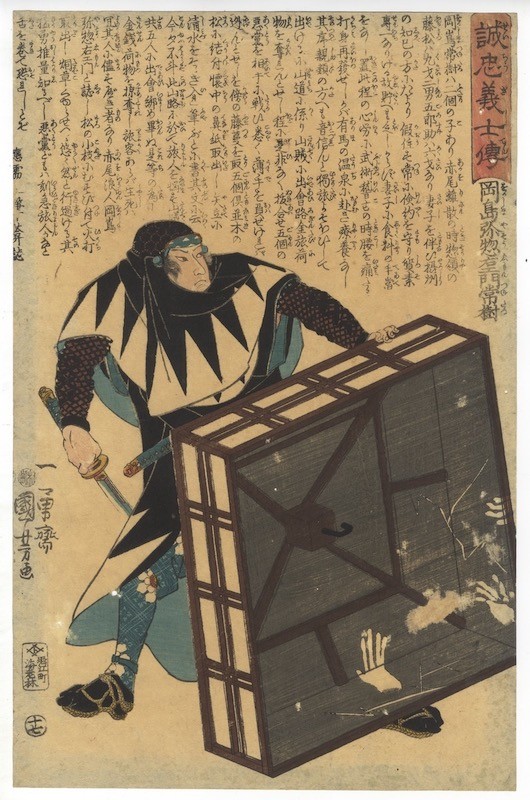 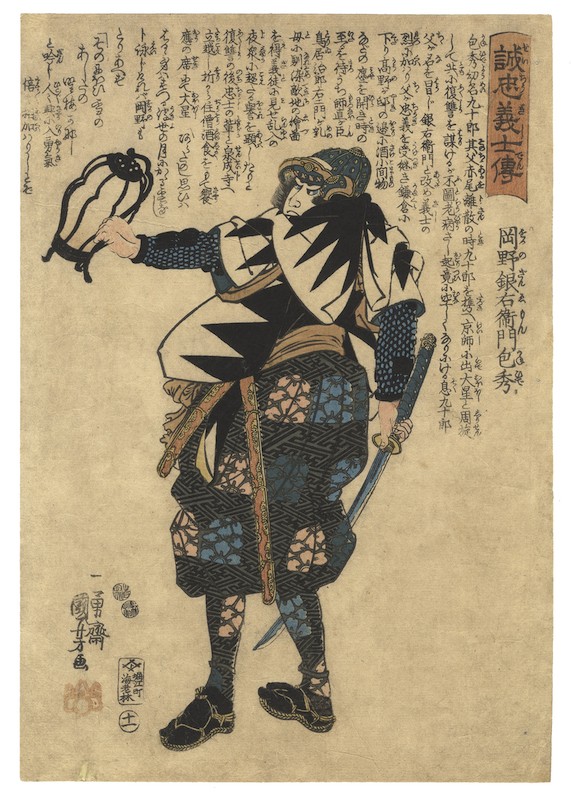 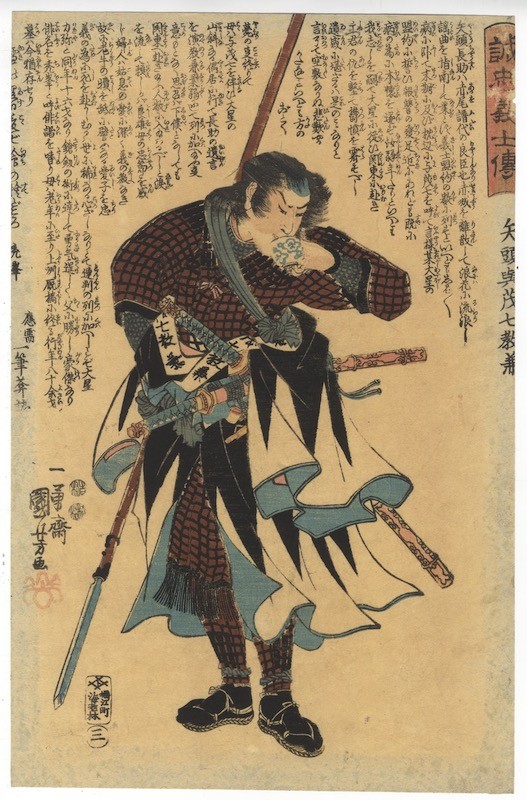 It was not until a year later that Kira, having heard very little from his spies and feeling more at ease, began to lower his security. On January 30th, 1701 (or December 14th, 1702 by the old Japanese calendar) under a heavy blanket of snow and in the shadow of night, the rōnin attacked Kira’s residence, killing and beheading their enemy.

They then marched the head to Sengaku-ji Temple where Lord Asano had been buried and offered it before his grave. Having avenged their master, the 47 rōnin awaited their fate. In 1703, despite public uproar supporting the loyal and heroic rōnin, the Shogun sentenced them to commit seppuku. Their bodies were then taken to Sengakuji Temple and buried individually beside the tomb of Lord Asano where they remain to this day.

The heroics, honour and sacrifice of the 47 rōnin captured the hearts and minds of the Japanese people and have inspired countless retellings of the story. Their display of samurai morals and virtue (bushidō) came about at a time when the social and economic class of the Samurai had been dwindling. By upholding their honour and loyalty, the rōnin set an inspiring example of morality that has resonated with many and is still being celebrated at the annual Ako Gishisai festival. The cultural impact of this historical event cannot be understated. Chūshingura (忠臣蔵, The Treasury of Loyal Retainers) is a title given to fictionalised accounts in Japanese literature, theatre and film that relate to this historical incident. The decision of the Shogun to carry a death sentence reflected poorly on the government at the time. In earlier versions of these Chūshingura productions, events and names of characters were adapted to avoid further state embarrassment and the censorship that may have resulted from it. This reflection on the government reveals the social significance powerful meaning behind the actions of the 47 rōnin.

The story has also been the subject matter of various works of art. In particular, woodblock print artists have often sourced inspiration from the incident. One of the most famous of such works is Kuniyoshi Utagawa’s series, ‘The Faithful Samurai’ (誠忠義士伝, seichyū gishi den). The series depicts each of the 47 samurai accompanied by a narration which illuminates and commemorates aspects of their lives. Although this is the most well-renowned of Kuniyoshi’s artworks relating to this story, he produced many series on the subject. A willingness to lay down one’s life for a noble cause as portrayed by the honour and sacrifice of the 47 samurai clearly inspired Kuniyoshi who devoted much of his own life to these works. The popularity of the tale has remained constant with many other artists such as Utamaro Kitagawa and Hiroshige Utagawa I producing art relating to the Chūshingura. The cultural significance of the Genroku Akō Incident is testament to the honour and loyalty inherent in the sacrifice of the 47 rōnin, a sacrifice that continues to captivate and inspire to this day. 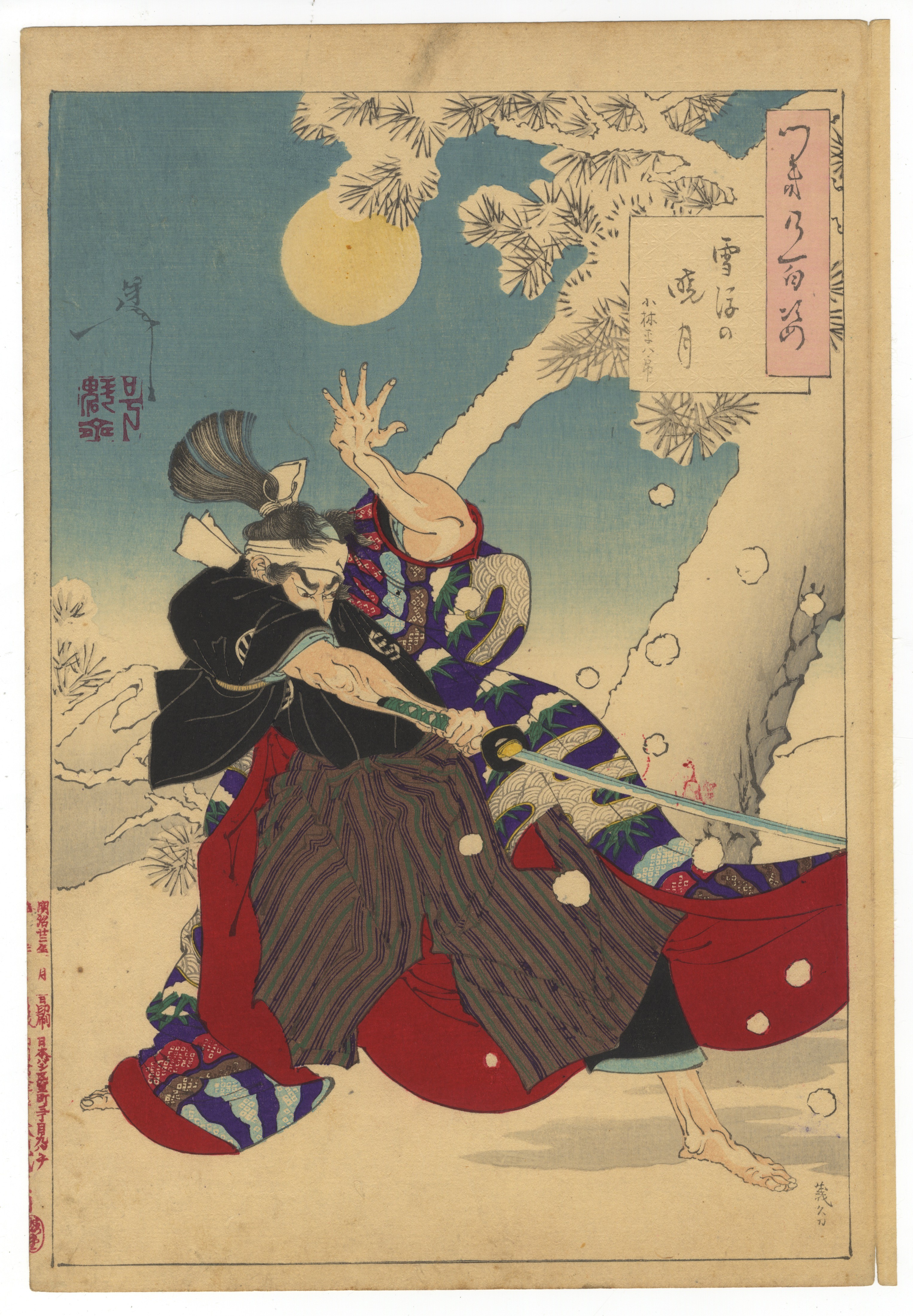 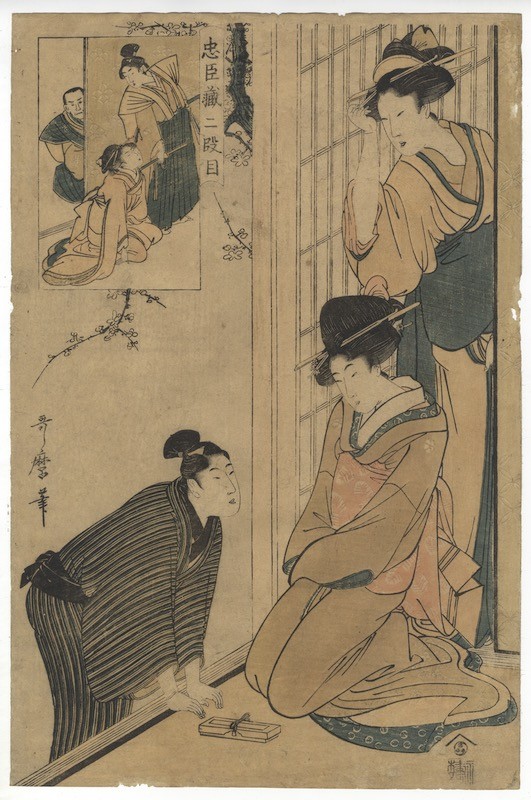