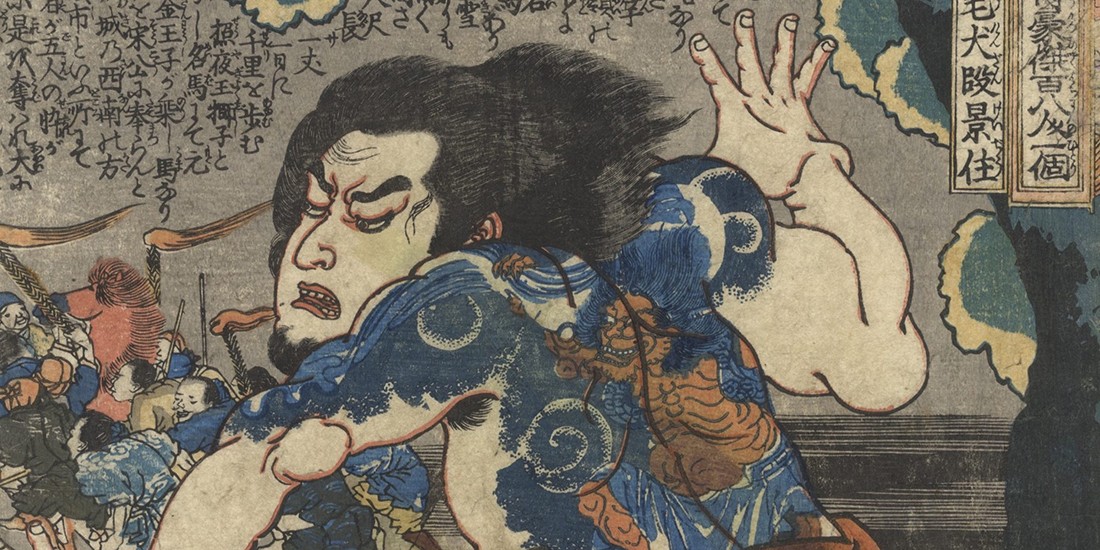 Many would recognize Kuniyoshi as one of the most iconic Japanese woodblock print artists, yet he is also credited with influencing another visual art form, that of traditional tattoo designs. These are still a source of inspiration and are followed with precision by tattooists practising Japanese style tattoos worldwide. In this article, we look at how Kuniyoshi depicted the heroes of his time in woodblock prints and how he skilfully integrated tattoos in designs that still carry a meaningful message.

Kuniyoshi (1797 – 1861) was born in Edo (present-day Tokyo) as the son of a silk-dyer. It is said that he had a great interest in drawing from a young age. Even though Kuniyoshi eventually became a well-known and respected artist, the way to success and acknowledgment was a long struggle. His break-through came in 1827 with the series of ‘The 108 Heroes of The Tale of Suikoden’, which is based on a Chinese novel of the same name from the 14th century about brave rebels who fought against injustice and corrupt government officials. The story struck a sensitive chord within the common people of Edo, equally repressed by a military government and unable to openly show their dissent. 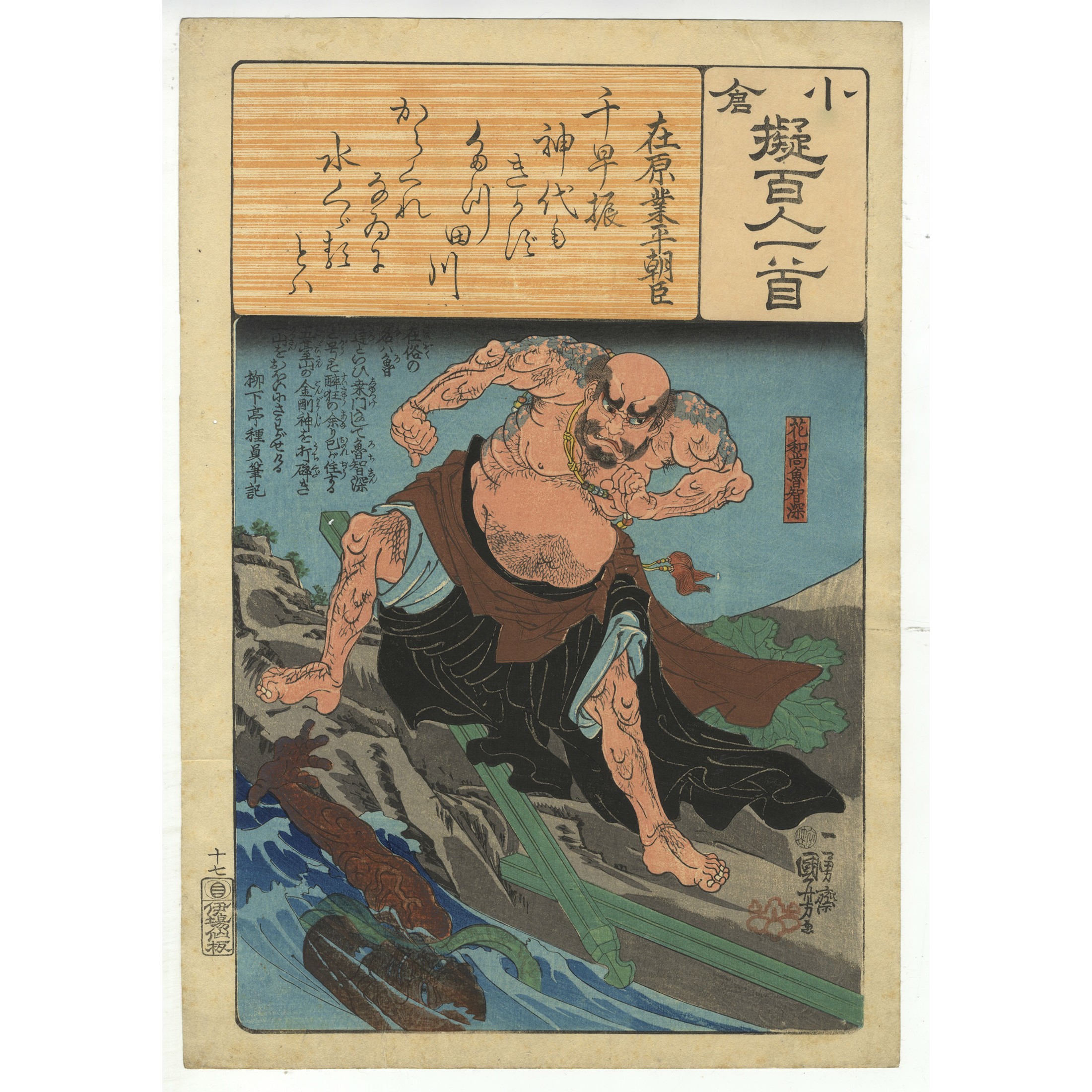 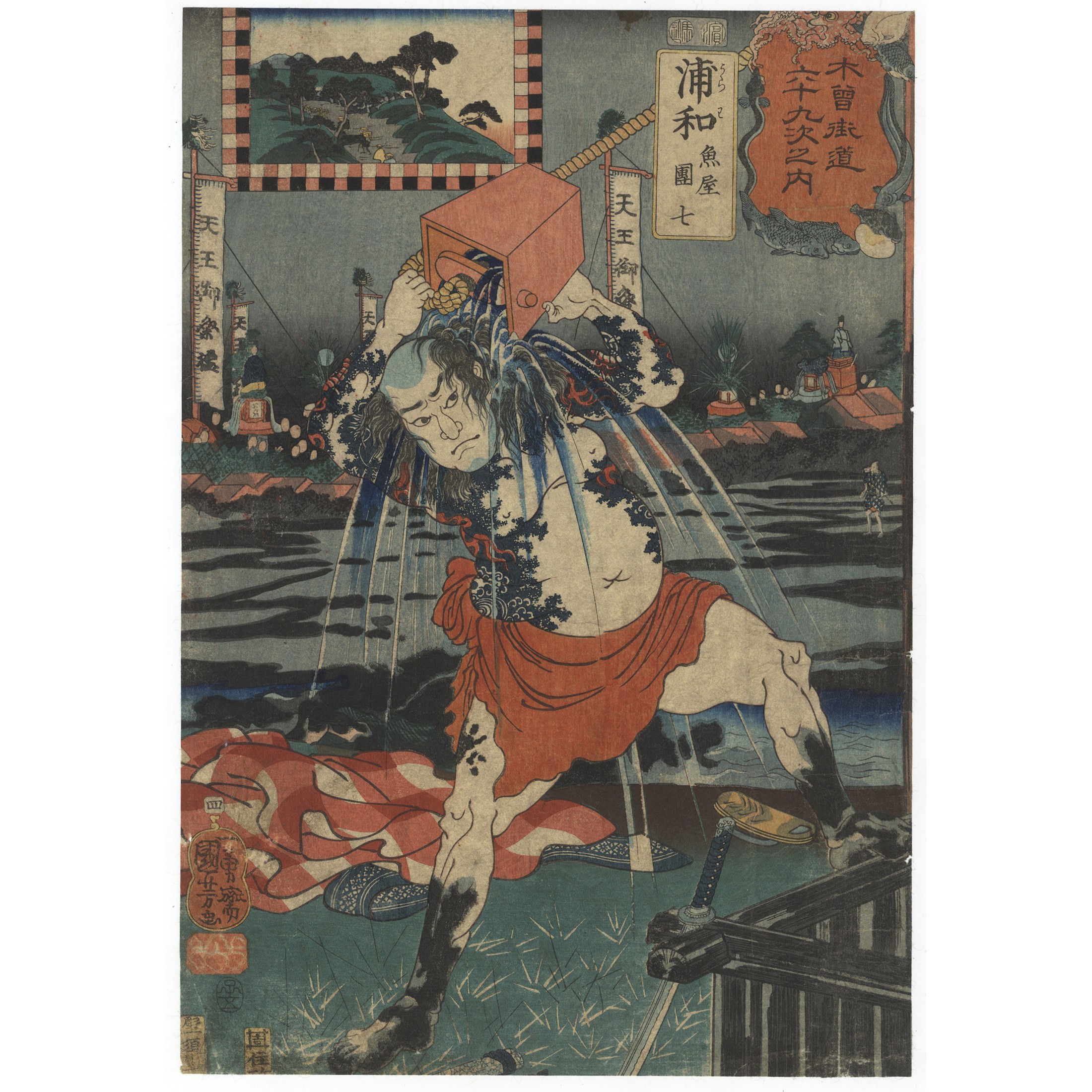 In Edo Japan, the samurai class had yet to adjust to the daily routine of peacetime and grew frustrated with the loss of status and usefulness. Bored and idle, they frequently caused trouble in towns and were involved in street fights and robbery. At the same time, the commoner otokodate (street knights) were gaining confidence in their strength among the lower classes and were seen as the natural rivals of the samurai. The otokodate were one of the main groups to adopt tattoos as a recognizable feature and they were idealized and romanticised in ukiyo-e and kabuki dramas.

The rise of the otokodate, the new hero figure in Japan, most likely contributed to the overwhelming success of Kuniyoshi’s Suikoden series. The characters are adorned with intricate tattoos that were emulated by common people and Kuniyoshi’s bold, dynamic and sometimes lurid style, were novel and captivating. The popularity of Suikoden also developed on a backdrop of political instability and laws that banned the portrayal of actors and courtesans by woodblock print artists. Instead of feeling restricted, Kuniyoshi took advantage of the ban and looked towards the heroes of the past in order to disguise political disaffection. The public of the day knew immediately how to interpret these subtly conveyed messages, often with humorous and satirical designs.

The behaviour of the otokodate and the Suikoden heroes closely resembled and stimulated the popularity of the other. As a result, Kuniyoshi’s designs came to be immortalized on paper as well as on skin, contributing to the development of the Japanese pictorial tattoo as a fashionable item. 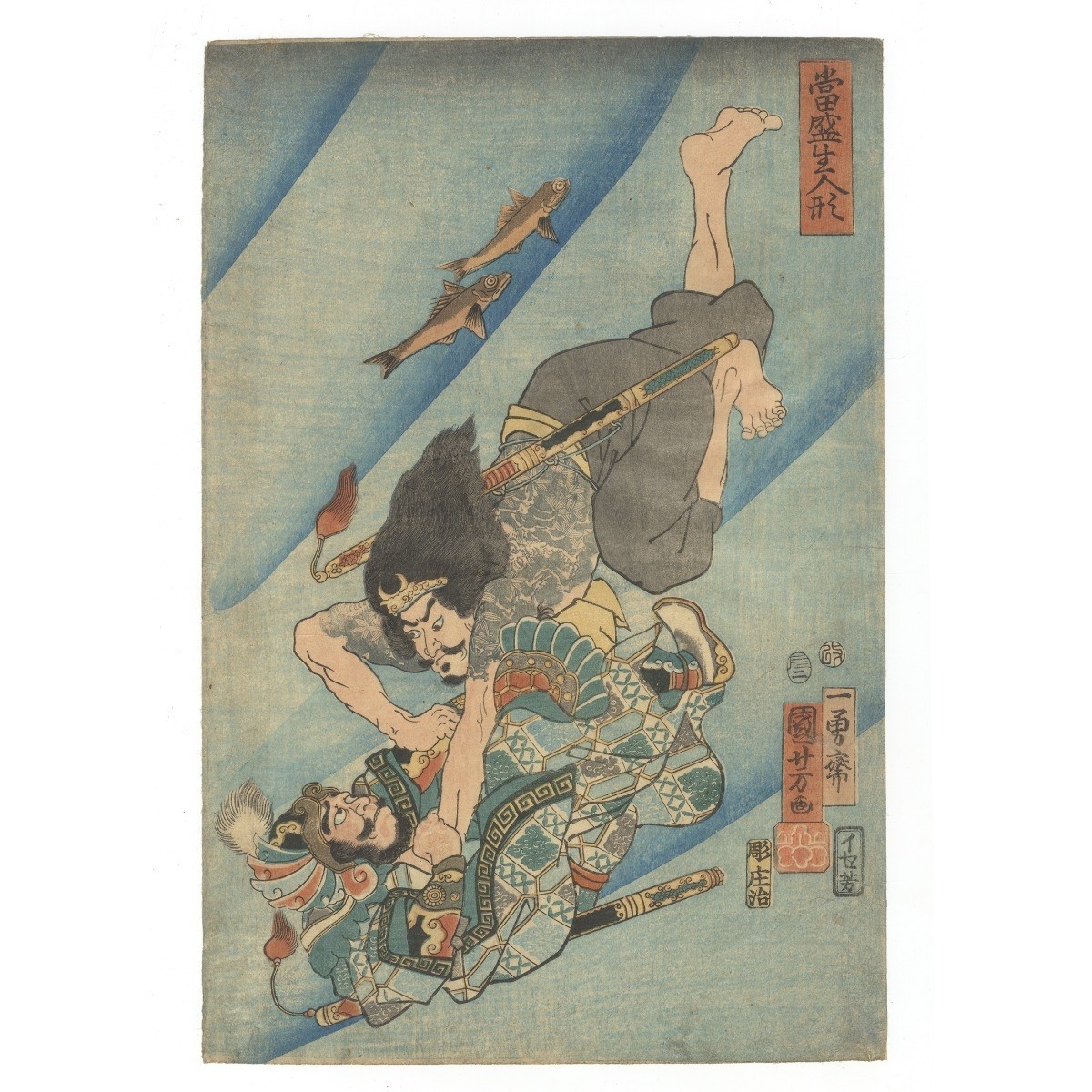 Most of the motifs that appear in the Suikoden tattoos are animal and floral designs, but mythical characters such as the god of wind, Fujin, or the god of thunder, Raijin, also appear. Furthermore, it is during the time of Kuniyoshi’s Suikoden series that different tattooing techniques and set-ups, the use of backgrounds and compositions found in modern Japanese tattoos arose.

It is assumed that Kuniyoshi himself might have been tattooed, which explains the high level of detail brought out by his designs. Nicknamed ‘scarlet skin’, some depictions of the artist testify to his playful nature. Few portraits of the artist exist, but they all show Kuniyoshi engaged in what he loved most – designing woodblock prints or teaching students. His clothes were richly decorated with patterns that may have been an indication of more designs hiding underneath. Because of the laws of the time, common people were restricted from wearing overly decorated clothing, yet Kuniyoshi was never afraid to walk a thin line and cleverly challenge rules in his own eccentric way.

Other students of Kuniyoshi drew sketches and used tattoos as a theme in their woodblock print designs and Kuniyoshi himself revisited the topic many times in other series with the same recognition. Kuniyoshi had a great passion for his craft, as is evidenced by the large number of prints he produced. He was a simple, straight-forward and broad-minded man who educated many artists including Yoshitoshi, Yoshiiku and Yoshitora. It is thought that Kuniyoshi particularly favoured Yoshitoshi, the best student among them who would become a great ukiyo-e master himself.

There is no mistaking the fact that Kuniyoshi’s interpretation of the Suikoden heroes had a major impact on tattoo culture in Japan. The intense swirling patterns, colours, and motifs, that are so iconic today might not exist as seen and practiced today were it not for this novel and the associated artwork. Consequently, many Japanese tattoo artists still render their own versions of popular themes, stories, or prints from Suikoden, becoming their own contemporary telling of a timeless story that has indelibly influenced their craft.