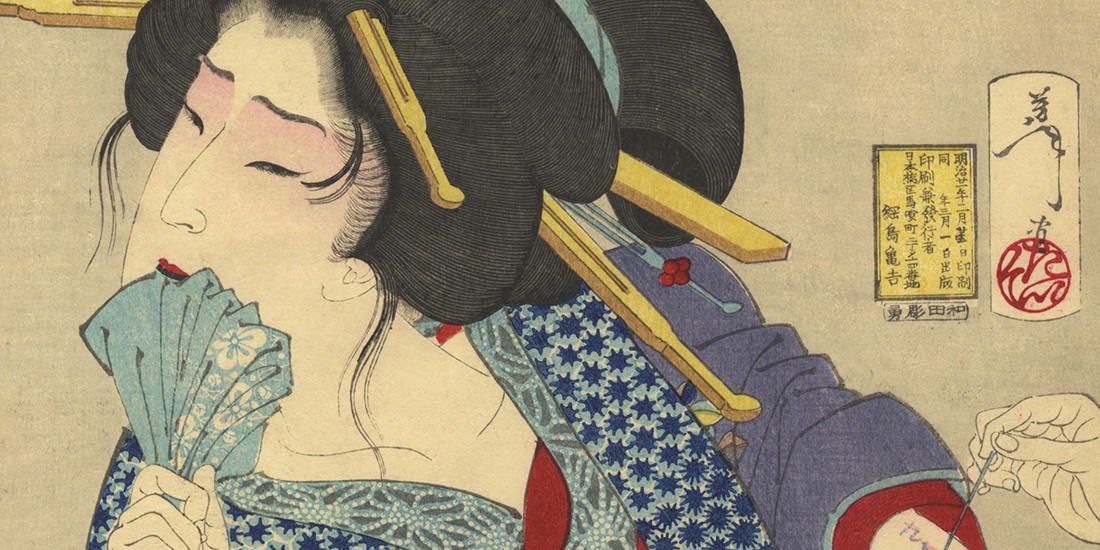 Yoshitoshi Tsukioka was one of the leading figures in ukiyo-e during the Meiji era (1868-1912), and perhaps the greatest ukiyo-e artist among his contemporaries. Yoshitoshi’s style was dynamic and distinctive: he was known for experimentation in style and genre, as well as for his innovative works. No other artist had produced ghost prints or included a range of different subjects in a single series before he did.

As a child, Yoshitoshi was enrolled as a resident student in the school of Kuniyoshi (1798 – 1861), one of the most successful woodblock print designers in Edo (today’s Tokyo). In here, he was given the name ‘Yoshitoshi’, traditionally adopting the same characters as his teacher’s name. In this studio, Yoshitoshi learned how to design prints and he probably spent much of his time making draft copies of Kuniyoshi’s sketches, which would explain how he knew his teacher’s designs so well, often using them as the basis for his own designs. Kuniyoshi’s training included drawing from life and sometimes he provided human models for his students to draw. This may seem basic to us now, but drawing from life was not necessarily part of the training for schools of painting and illustration in Japan, where traditionally the artist was to capture the essence of a subject rather than give a literal representation. Recognising his talent, Kuniyoshi treated Yoshitoshi with great affection, often referring to him as his own son. After Kuniyoshi passed away, Yoshitoshi developed a personal style influenced by his own personal tragedies. The intense, disturbing images of his early career reflect turmoil and pain. His prints from this period have violent and gory designs, including corpses and decapitated heads, a reflexion of his state of mind. 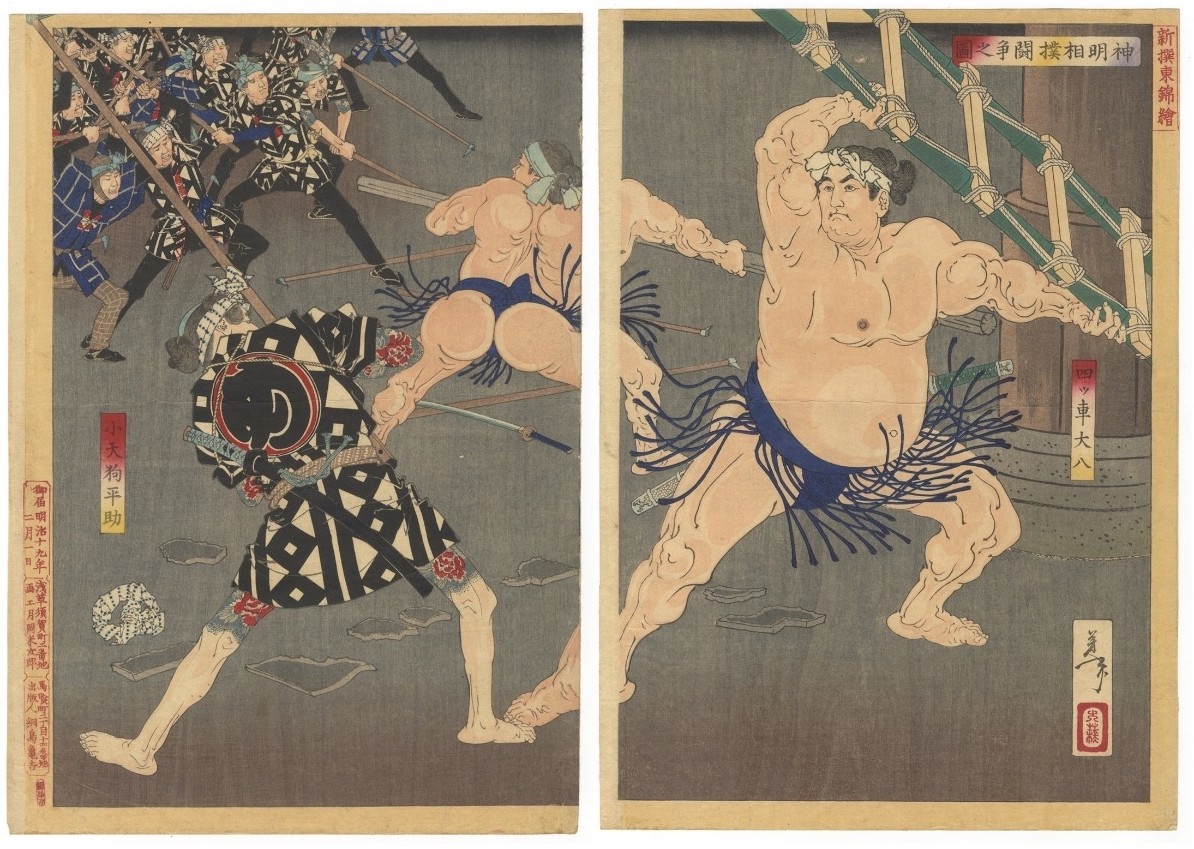 However, Yoshitoshi was a product of his time. Horror and cruelty were common themes in a part of history when Japan itself was going through modernisation. The feudal world of Edo and the new Western values were often in conflict, and such themes were common in plays, literary fiction, and woodblock prints. Yoshitoshi was an emotional man with powerful visual imagination, which extended to the design of prints with cruel and brutal subjects.

The publishing of Yoshitoshi’s most popular, and possibly best, series “One Hundred Aspects of the Moon” (Tsuki Hyakushi) commenced in 1885. Consisting of one hundred prints, this series spanned a wide variety of subjects and became famous through its variety of subjects taken from Japanese and Chinese history and mythology, such as warrior, animals, ghosts, natural phenomena, beauties and others. The artist’s early tendency for gore and horror was replaced by one hundred images of lyricism, calm, spirituality and psychological depth. This series also seemed to mark Yoshitoshi’s artistic independence and departure from a traditional ukiyo-e style.

During his career Yoshitoshi designed several prints devoted to the Suikoden theme, which is not surprising considering his apprenticeship with Kuniyoshi, the master of the genre. One of the best known Suikoden heroes, the tattooed Kumonryu Shishin, apparently is a Yoshitoshi favourite and he appears in the artist’s prints more than once. By far the most celebrated example is the portrayal that is part of the series ‘One Hundred Aspects of the Moon’. Usually Kumonryu is shown in spectacular fighting scenes, but in Yoshitoshi’s version the hero is seated on a bench underneath a weeping willow, calm and collected, on a moonlit night. His pose and facial expression are marks of self-confidence and toughness, with a touch of arrogance. Unlike Kuniyoshi’s version from Suikoden, Yoshitoshi managed to give his design an aura of serene expression and beauty, by combining only the most essential elements in a well-balanced composition. 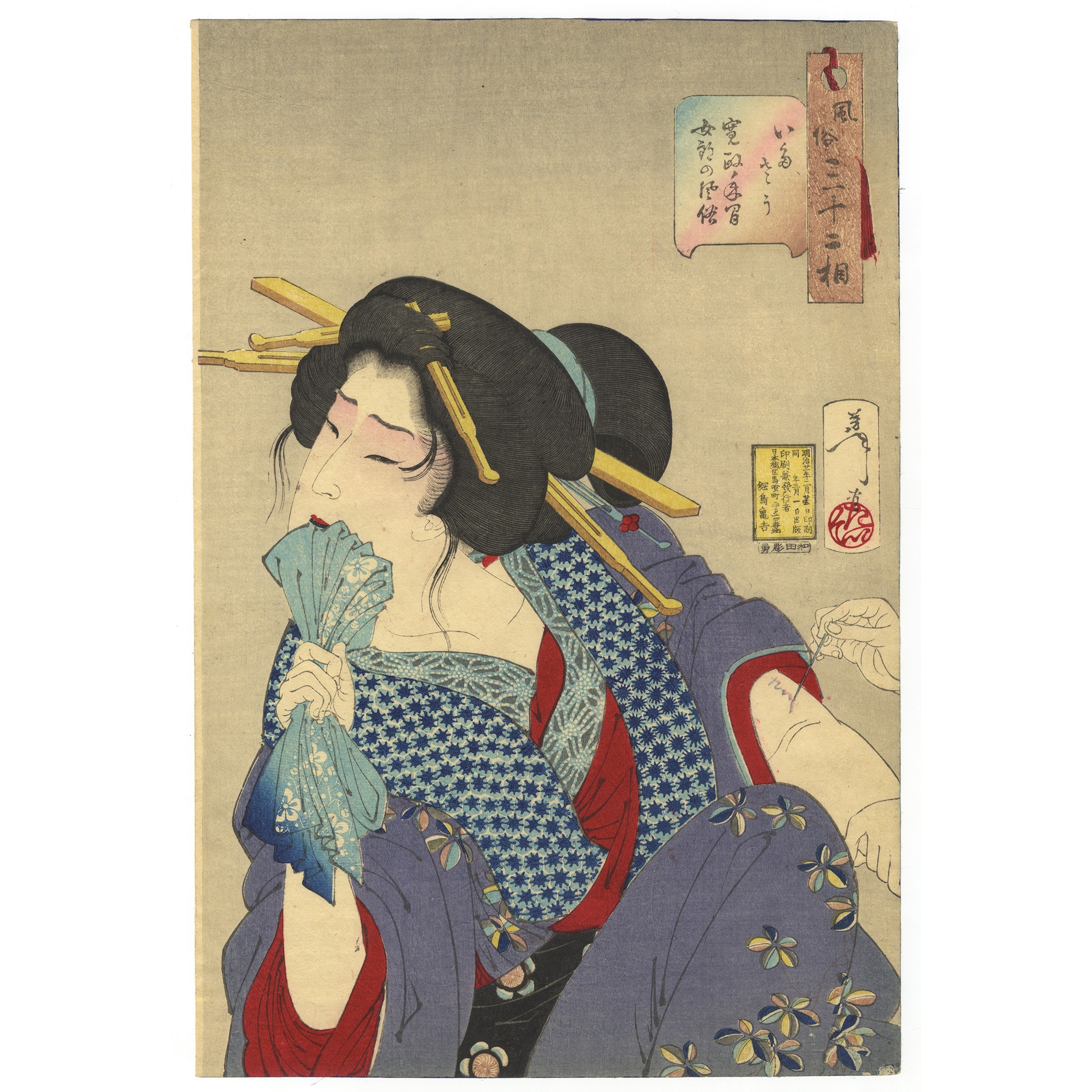 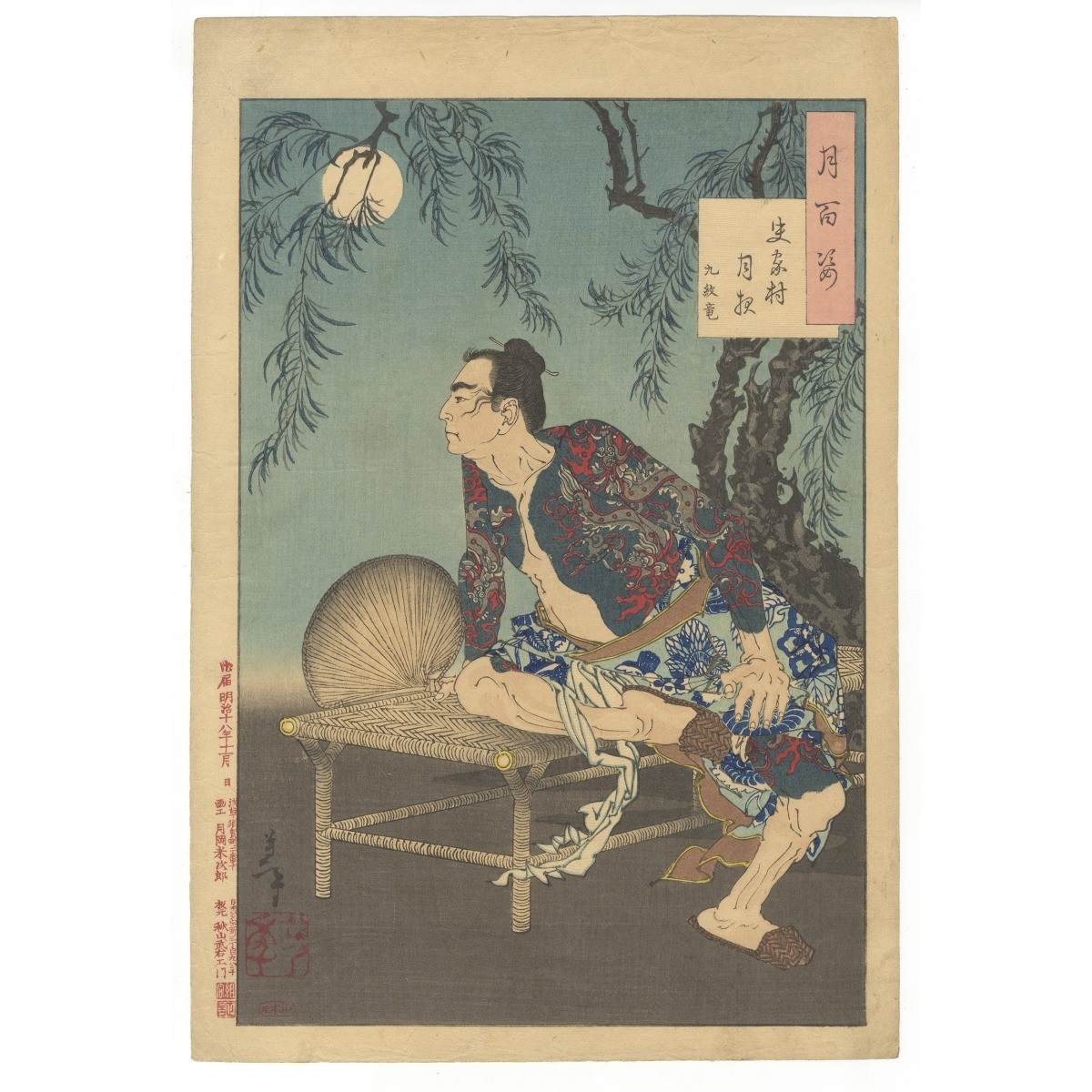 Yoshitoshi Tsukioka, Kumonryu, One Hundred Aspects of the Moon, 1885

Yoshitoshi also designed ‘bijin-ga’, or images of beautiful women of their time. Courtesans were a large part of the world of entertainment, alongside performers such as geisha and actors. Courtesans were sophisticated and refined women, trained in the arts of calligraphy, poetry, flower arrangement, conversation, dancing, music and worked from specially allocated quarters. In the environment they operated, there was a growing desire to put seals on feelings to make them ‘everlasting’. While around the beginning of the Edo period tattooing was still used for punishment and identification, it also became popular among the female population of the entertainment centres to decorate their bodies. The practice of ‘irebokuro’ involved tattooing dots at the base of the thumb that would be connected when the partners joined hands. ‘Irebokuro’ eventually evolved into short texts or names, and courtesans themselves would sometimes tattoo their lovers, in a ritual of mutual love confession.

In one design by Yoshitoshi the girl depicted bites her handkerchief in distress as her arm is tattooed. The tattoo appears to be the opening strokes of ‘sakura’ (cherry blossom), and is probably the name of nickname of her lover. As tattooing was a practice of the demimonde and gangsters, labourers and courtesans were the most likely groups be tattooed.

To this day, Yoshitoshi remains one of the most acclaimed ukiyo-e artists who often used tattoo designs in his prints. With his talent, imagination, and attention to detail, he carried on a legacy that continues to fascinate woodblock print collectors and tattoo enthusiasts alike.