This month at the Japanese Gallery, we have had some exciting new acquisitions centring around the Musha-e genre.

Musha-e are prints that depict samurai and warriors, often in battle. The famous woodblock print artist Kuniyoshi Utagawa (1798 - 1861) was a dominating force within this genre, with his particular style immediately recognisable to many. The whole of the Utagawa School were prominent producers of these types of prints, with notable artists such as Kunisada and even Hiroshige turning their hand to warrior imagery. Musha-e initially developed at the end of the 18th century, with early examples created for books of classical literature predominantly about the Genpei War, known as the Heike or Genpei Monogatari (平家物語).

The Genpei Wars were a civil war between the Minamoto and Taira clans between 1180 – 1185. After five years of struggle, the Minamoto clan won and established the Kamakura Shogunate. The change in power structure completely shifted the political, social and cultural landscape of Japan.  It transformed the highly sophisticated, aristocratic culture of the Heian Period (794 – 1185) centred around the Emperor, to a feudal system with the Shogun at the top. This twelfth century war ushered in the dominant culture that creators of Musha-e prints would have been so accustomed to. During the Edo period, evoking the gallant wars of the samurai 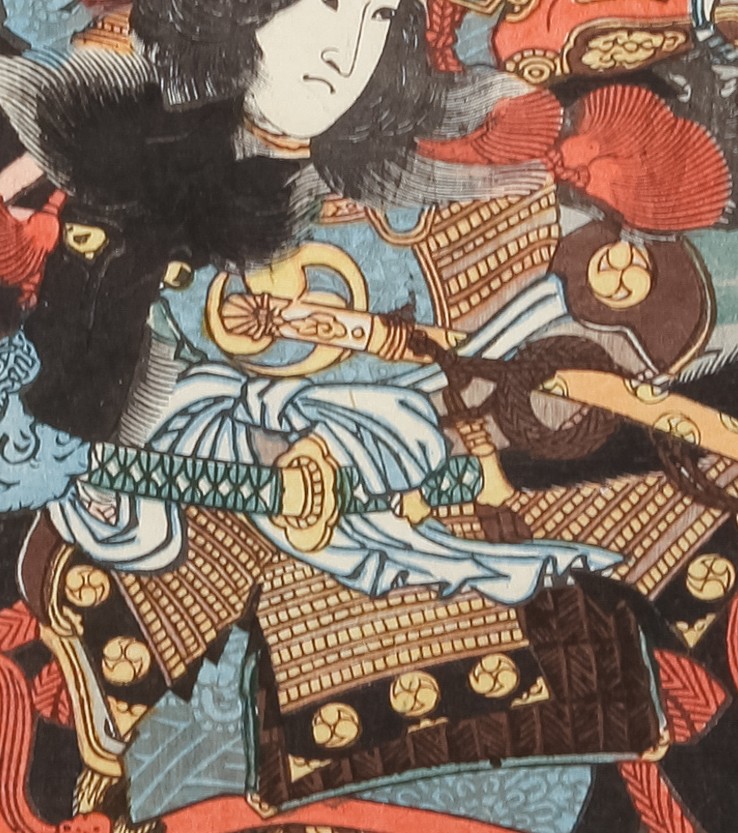 Lady Tomoe in a Battle, detail of amour crest.

from times past was encouraged by the Tokugawa Shogunate and was a dominant theme across painting and print, with its primary source of subject matter taken from Heike Monogatari. These stories of Genpei were originally written to appease the souls of the defeated warriors and to remind audiences that all warriors, whether they are victorious or in defeat, are upheld by honourable military code. This was translated into visual art, which trickled down from screens in upper class households to prints made for the masses. Not only did it invoke Samurai heroism, it strengthened the Shogun’s legitimacy. Firstly, by mirroring their own victory after almost a century of civil war and unrest. Secondly, as a reminder that the Tokugawa family bloodline was supposedly traced back to the victorious Minamoto and therefore were the rightful rulers over Japan.

Kunisada I Utagawa (1786-1865) was famous for his prints of beauties, in his triptych ‘Lady Tomoe in a Battle’, he has turned his attention to a female subject of a different kind. Tomoe Gozen, riding horseback in the central panel, was a famous warrior who fought on behalf of the Minamoto. In Heike Monogatari she is lauded for her remarkable skills in archery and swordsmanship, as well as for her beauty.  She was a mysterious figure, with details of her life perhaps more legend than fact. Even her name is not her own, as it was considered rude to refer to women by their given name. 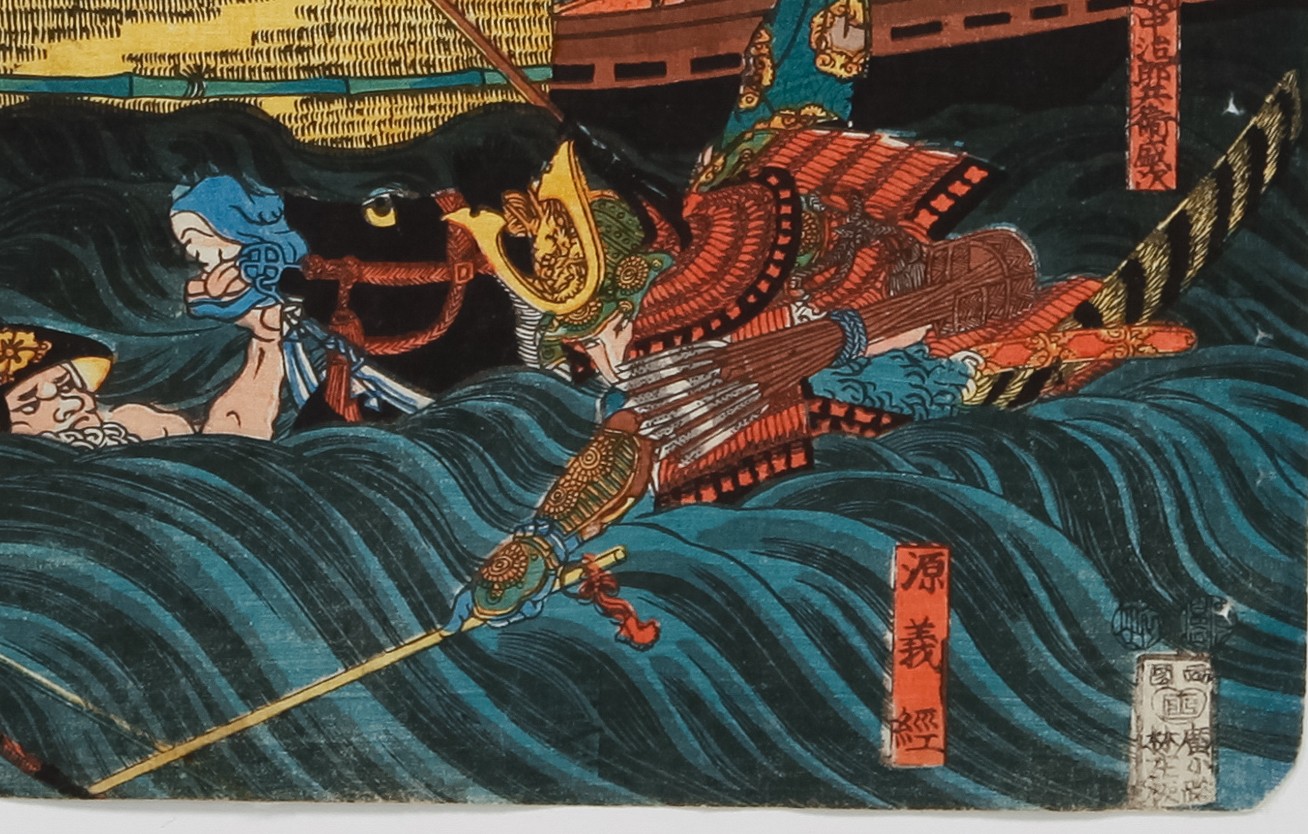 'Yuminagashi' Yoshitsune Picking up His Bow in the Water, detail.

Tomoe (巴) refers to the crest pattern on her armour and Gozen (御前) is a general term for an honourable woman. Kunisada chose Tomoe Gozen as his subject several times, but Musha-e’s most depicted hero is no doubt the leader of the Minamoto clan, Minamoto no Yoshitsune. He continues to be so legendary across Japanese literature

that his life, much like Tomoe Gozen, has become more myth than historical fact. Stories of his gallantry and heroic deeds eclipse a figure that in reality, people know little about. Even now, the cause of his death remains elusive. Kuniyoshi Utagawa’s print centres around Yoshitsune, depicting him in an act that both exalts him as a fearless samurai and humanises him to the audience. We see the leader of the Minamoto in the central panel, plunging into the sea to retrieve his bow. Yoshitsune has risked his life to save his weapon, concerned that the Taira would mock the use of a weapon commonly used within the lower ranks by such a renowned general. This print is set at the Battle of Yashima, one of the most represented episodes. The scene that Kuniyoshi portrays is frenetic and confusing, mirroring the deepening schisms between the Taira and Minamoto, and perhaps the swapping of alliances that were becoming more frequent at the end stages of the war.

A month after Yashima, the Taira clan were finally defeated after the battle of Dan-no-ura. Sadahide Utagawa’s (1807-1873) triptych of this naval battle is as every part as visceral as Kuniyoshi’s iconic style. In a clash of weapons and waves, Sadahide’s triptych conveys that this battle is the final showdown between the two clans. By this time, the Minamoto outnumbered the Taira three times over. Despite the impending defeat, the Taira fought bravely until the end. None of the warriors shown in this print are turning away from their enemy, proving the essence of the Heike Monogatari. Regardless of allegiance, no matter your prospects, every warrior is embraced by a noble samurai code.

Discover more of Japanese Gallery's Musha-e collection in our catalogue.