Japan’s Autumn Moon Viewing, known as Otsukimi (お月見), is thought to have formally originated in the Heian Period. Like many of the seasonal celebrations of the era, these night time gatherings would see aristocrats come together to write poetry and music under the full harvest moon.

This tradition has continued throughout Japan’s history and by the Edo period, people of all classes would celebrate Otsukimi. Through its popularisation, moon viewing celebrations began to be associated with autumn traditions in general and as thanks to the Gods for a bountiful harvest. Naturally, harvest celebrations led to a variety of foods being presented and eaten at Otsukimi including seasonal taro, chestnuts and edamame, as well as tsukimi dango, small white mochi resembling the moon, piled high often on a decorative plate used for offerings to the Gods. The 15 dango stacked in a pyramid symbolises the fifteenth evening of the eighth month, the evening of Otsukimi in the Japanese Lunar calendar. 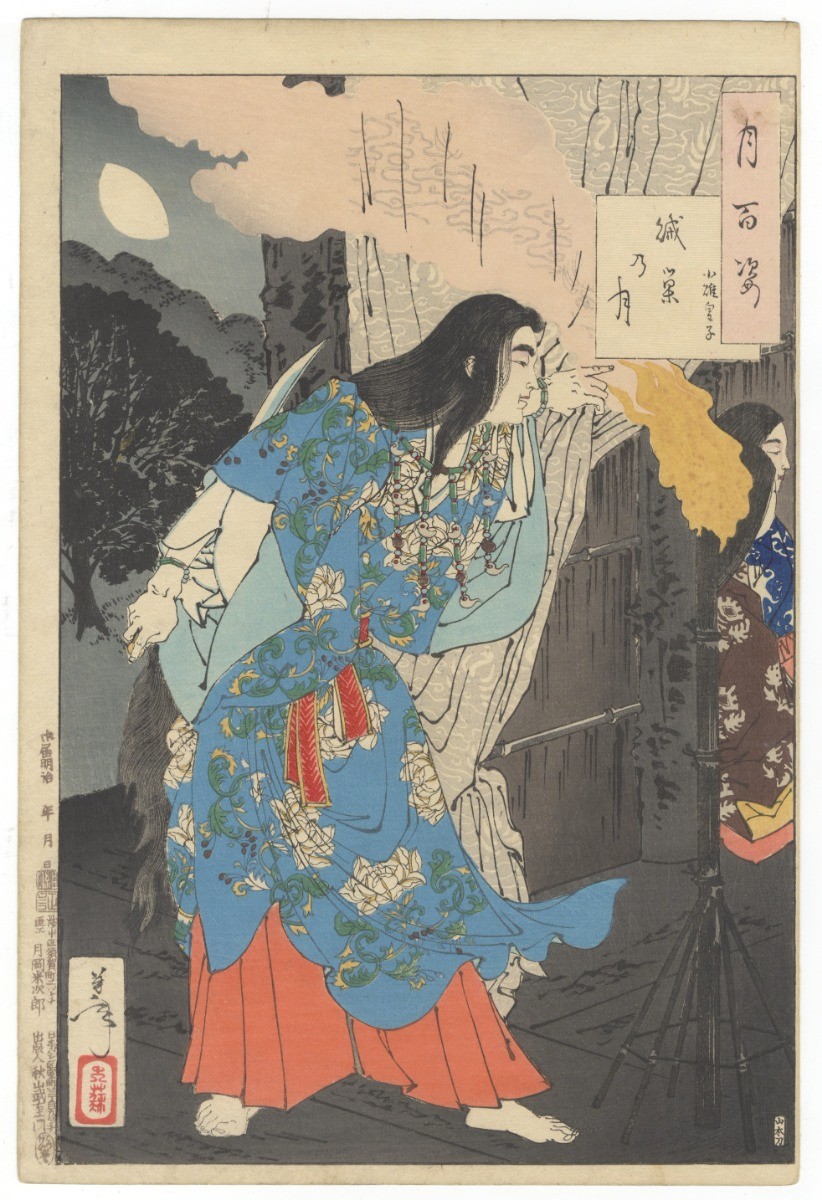 Yoshitoshi Tsukioka, Prince Usu, One Hundred Aspects of the Moon, 1885-1892

Modern day celebrations are a combination of all these aspects and are now seen more as a social occasion. At public spaces such as temples, gardens and castles, the traditional music, poetry and dance are still being performed, and people attend multiple celebrations throughout the month.

As with many of the floating world’s fleeting subjects, artists immortalised the moment in woodblock print. Chikanobu’s triptychs of the Meiji era are not just an ode to Otsukimi, but a nostalgic imagining back to the Edo period itself at a time where modernisation saw the fading of many Japanese ways of life. His print from the series High Ranking Ladies of the Tokugawa Era serves as a refined vision of aristocratic moon viewing gatherings. As Otsukimi was one of the traditions hailing from the Heian period, the elegance it invokes would not be lost on the viewer. The Edo period looked back to the Heian as a time of ‘peace and tranquillity’, the literal translation of the two kanji making up the period’s name. The Shogunate wished to invoke this stability in their new rulership, following almost two centuries of civil war in the Sengoku (Warring States) Period. 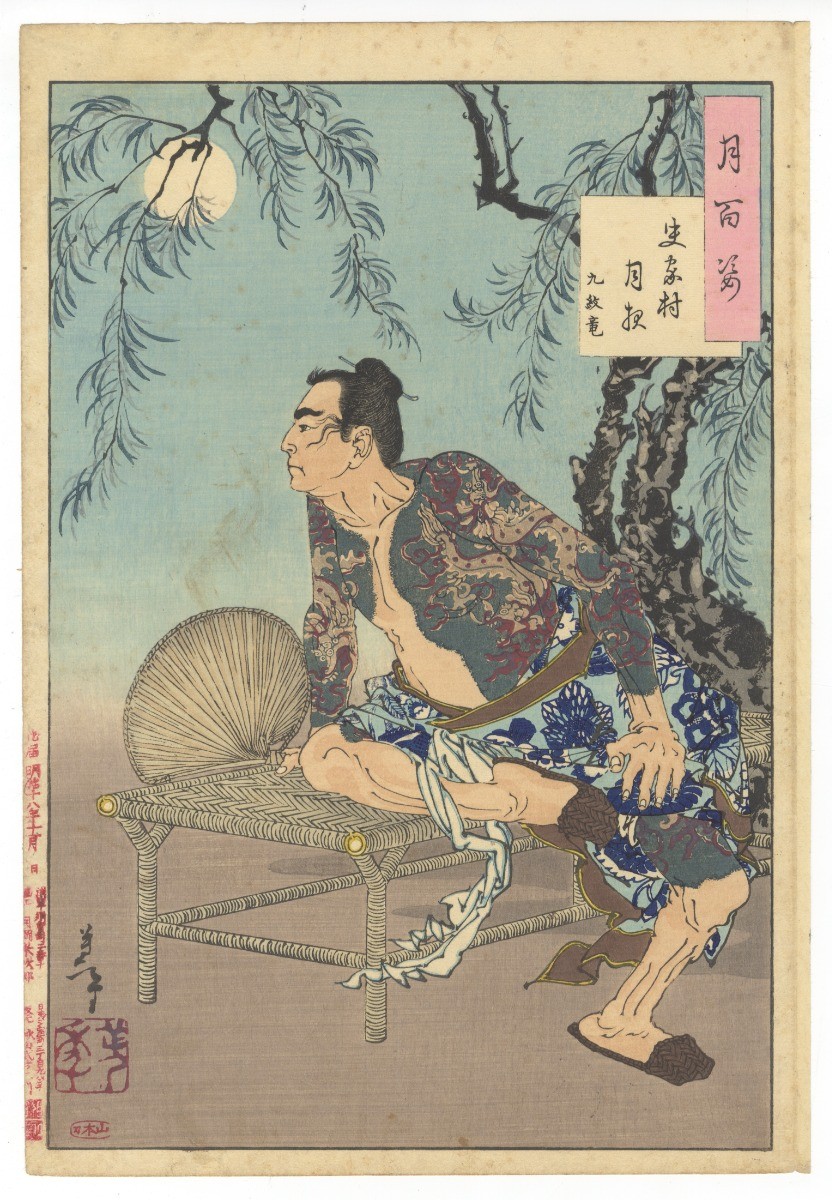 In the same vein as Chikanobu’s nostalgic prints, Yoshitoshi’s famous 100 Aspects of the Moon series, Tsuki Hyakushi (月百姿), looks back into Japan’s vibrant past and shows the viewer the Japan that once was. Each new design that was published from the series was wildly popular, with queues before sunrise stretching down the road to the merchant’s shop, with many finding the print already sold out by the time they reached the front on the line.

Although the series is not centred around the seasonal moon viewing, it’s popularity epitomises the strong connection people felt toward the romantic and expressive musings created by the moon’s waxing and waning. In this sense, we see through Yoshitoshi’s designs a deep appreciation for the moon in all settings and seasons.

‘Ishiyama no Tsuki’ creates the atmosphere of Heian elegance like Chikanobu’s Tokugawa Women and this image shows Murasaki Shikibu gazing at the moon, with a scroll open ready to write the epitome of Heian literature and the world’s first novel, Tale of Genji. The story goes that she arrives at Ishiyama Temple on the fifteenth evening of the eighth month. She prayed to the full moon that night for divine help in her writing. She produced arguably Japan’s greatest piece of literature. Yoshitoshi’s composition and choice of colouring is an unusual one, with Murasaki often depicted under the moon looking at Lake Biwa. He chooses the mountains as her scenery, the dark shadows playing off the violet of her robe. Murasaki was such a famous figure that her name does not even appear on the cartouche, the purple robe alone enough to indicate who she was. 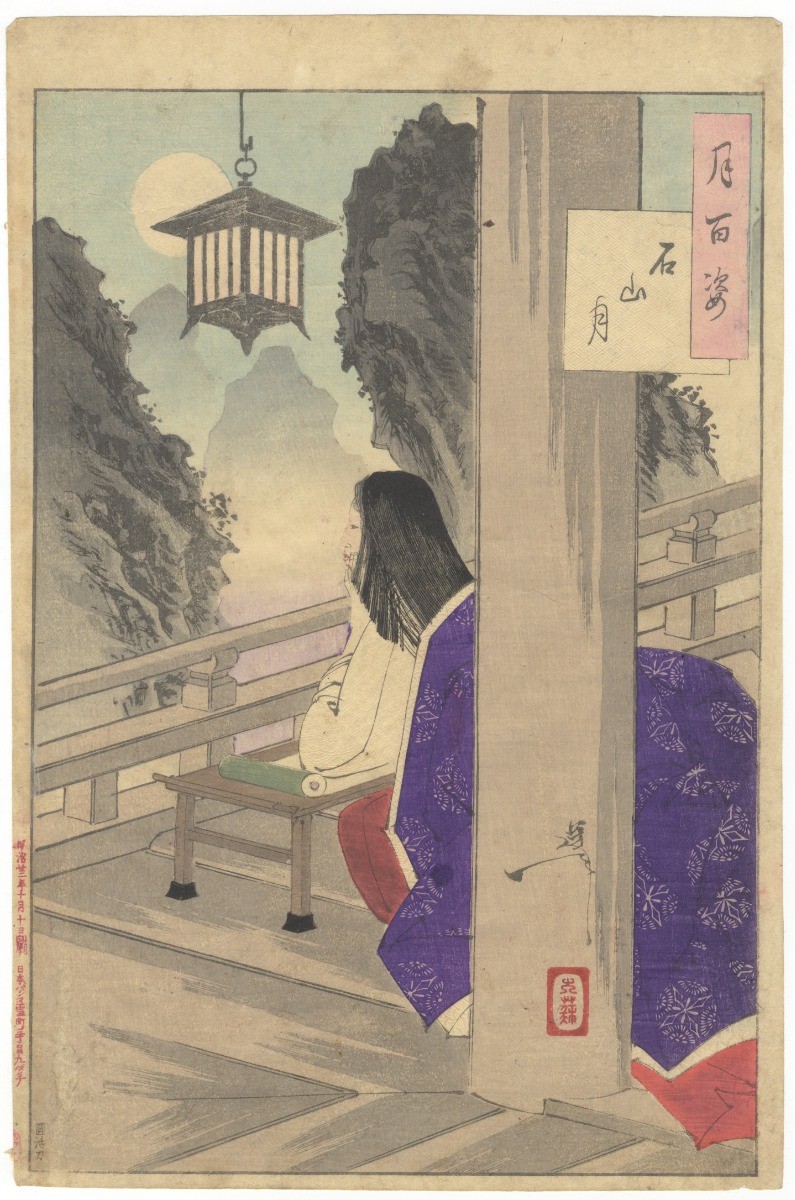 Yoshitoshi Tsukioka, Moon of Ishiyama, One Hundred Aspects of the Moon, 1889


Otsukimi is a quintessential part of autumn celebrations in Japan that has continued for centuries, showing it’s lasting appeal in a world that is constantly changing. There is something hauntingly magical about a full moon, and woodblock prints captures our fascination in a diverse and often intimate way. 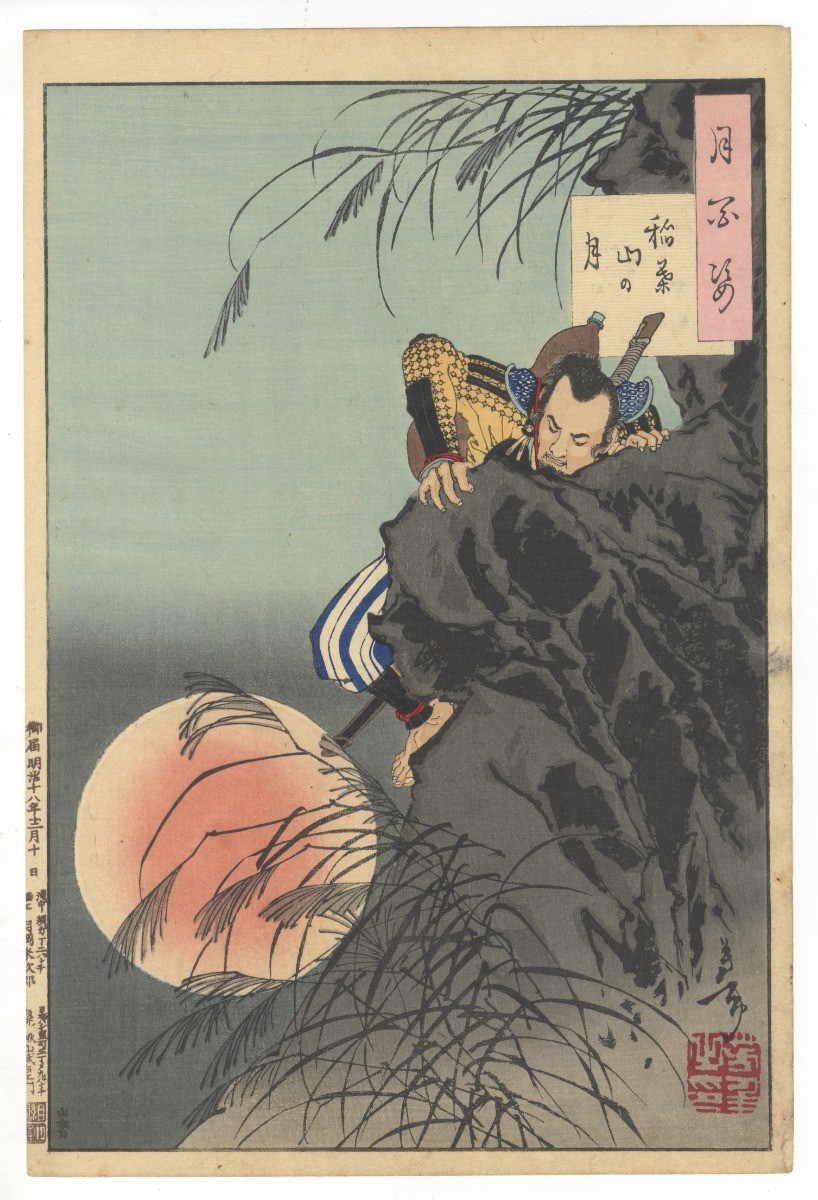 Yoshitoshi Tsukioka, Inaba Mountain, One Hundred Aspects of the Moon, 1885 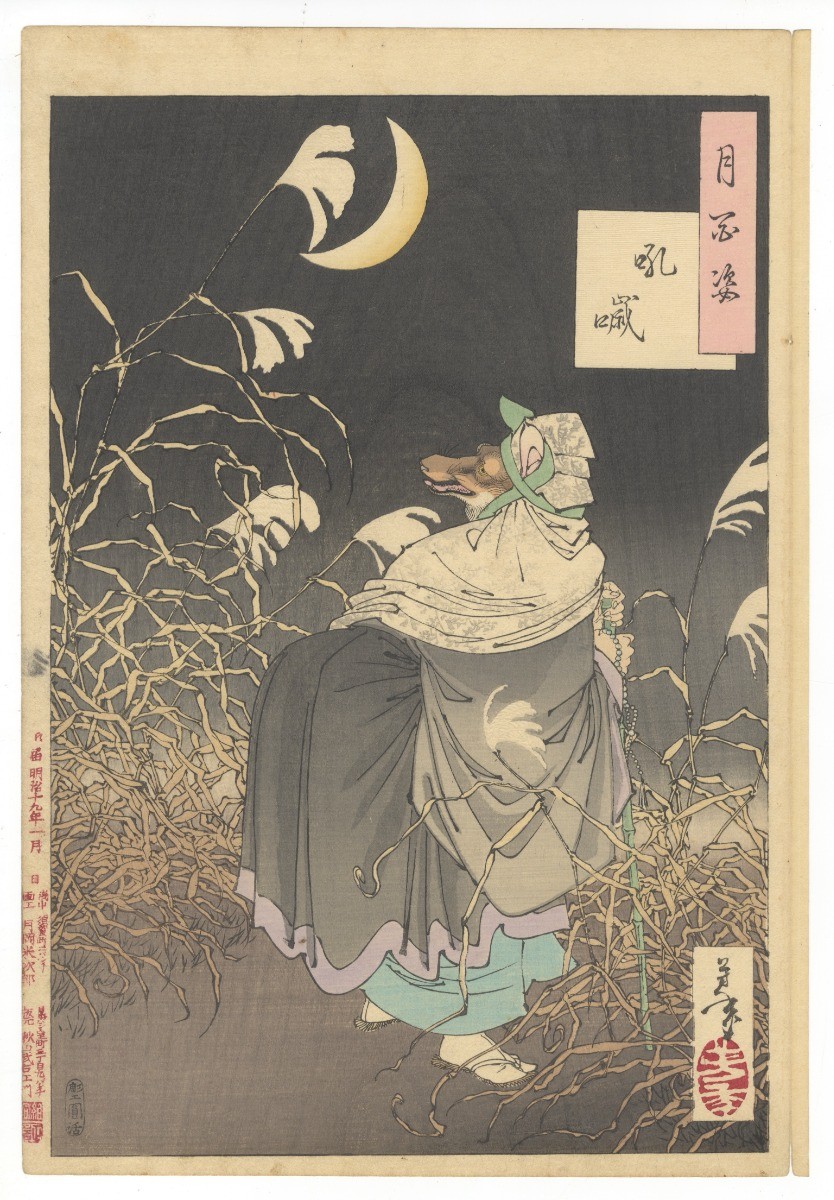 Yoshitoshi Tsukioka, Cry of the Fox, Konkai, One Hundred Aspects of the Moon, 1886 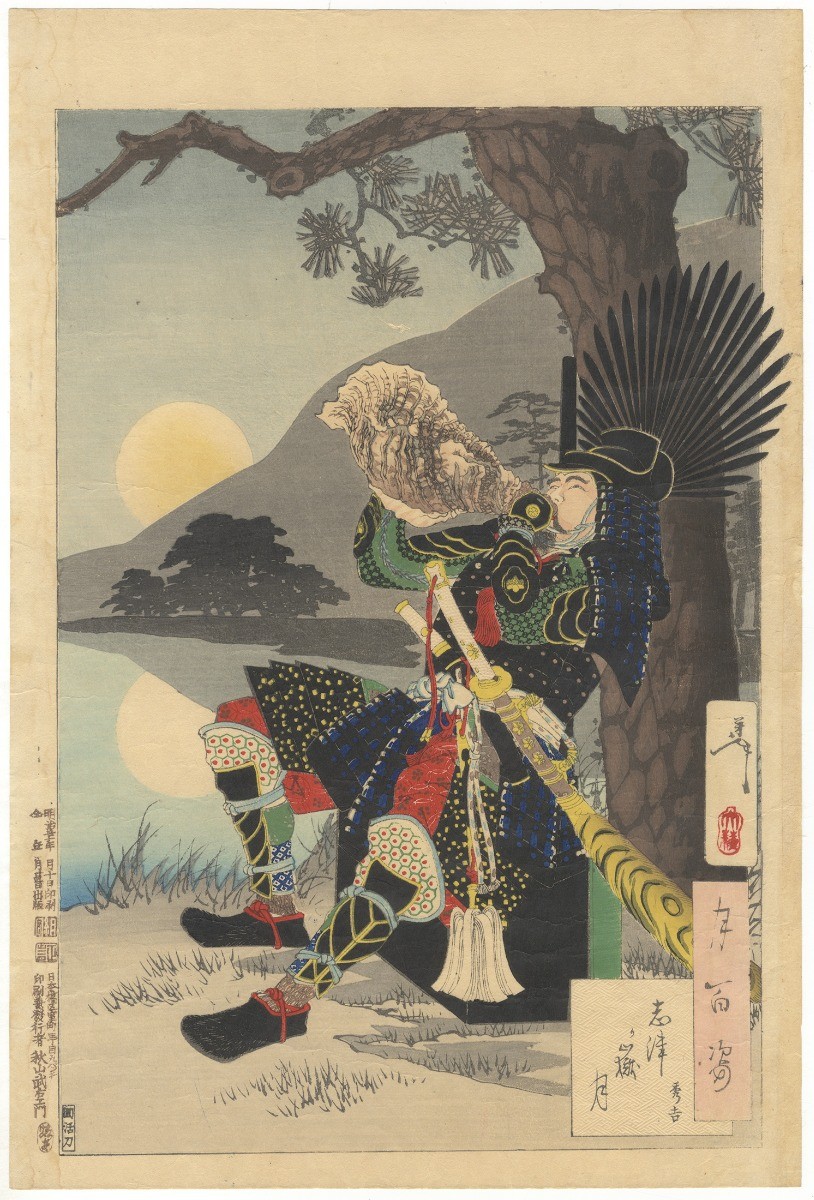