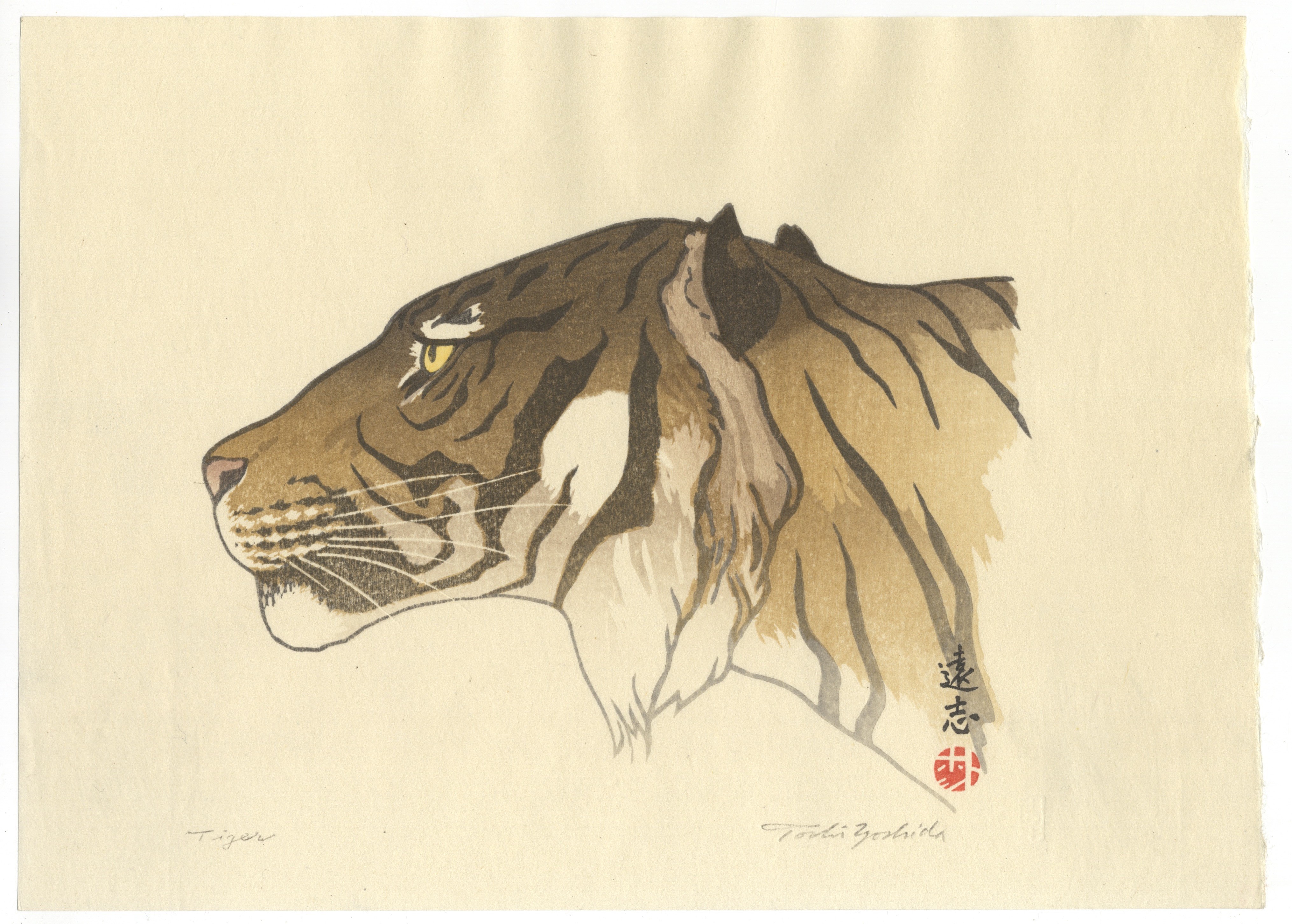 Take Courage - Welcoming The Year of the Tiger

This New Year, we are welcoming in the adventurous, courageous and risk-taking Tiger of 2022. The Year of the Tiger (寅年 tora doshi), specifically the water tiger, begins on 1st February according to the lunar calendar. The Chinese zodiac not only has a cycle of twelve animals, but also the five elements; Earth, Fire, Wood, Metal and Water.

In this context, the water tiger of 2022 is one that is deeply in touch with its emotions. The water element is related to sensitivity and self-reflection. Coupled with the tiger’s characteristics, this makes people born in the year of the water tiger incredibly in tune with their interpersonal relationships and a strong sense of family duty. Conversely, they can be brash and overwhelming to those close to them due to this potent combination of deep emotion and head-strong boldness. This year, the water tiger brings us the opportunity to make big changes, while keeping our egos in check.

Many of us heard the zodiac origin story in school each year when Chinese New Year came around. The most widely known version of that tale is The Great Race. The Jade Emperor, Emperor in Heaven according to Chinese folklore, called upon all the animals in the kingdom to gather for a race. The first twelve to arrive at the start line would be designated a calendar year after them. The animals that arrived first were: the pig, dog, rooster, monkey, sheep, horse, snake, dragon, rabbit, tiger, ox and rat. How they were ordered for each year all depended on where they finish in the race. Naturally, everyone wanted to come first. The tiger, being the character it is, assumed of course they will place first. However, there were wilier animals in the running. On the day of the race, the rat woke early to rush to the gathering site and sees the ox running incredibly fast. They make a deal: the ox will carry the rat, if the rat sings to the ox. On the stretch to the finish line, the ox has passed the tiger and is in the first place. At the last moment, the rat pushes himself off the ox and to the front, taking first in the last second. The speed of the ox and the cunning of the rat pushed the tiger to (the respectable position of) third place.

The zodiac was also imported to Japan, where they were playfully depicted across hand scrolls, paintings and prints. Outside of the zodiac, the tiger was symbolically paired with the dragon, making it one of the strongest and mightiest of the animals. The two were considered rulers of the heavens and earth, yin and yang. So in Japan, the tiger has long been associated with the earth and (contrary to Chinese folklore) yin energy. 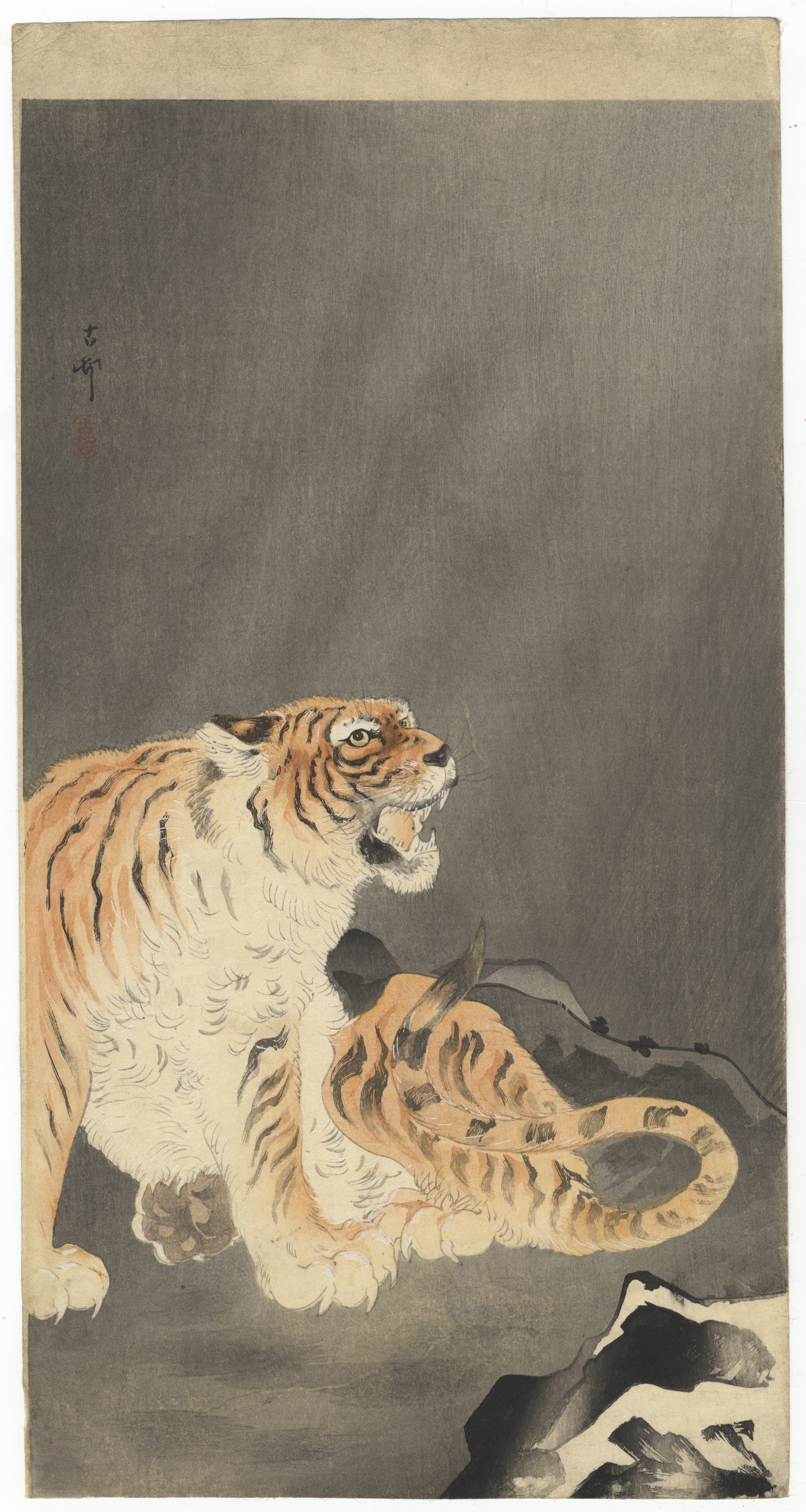 During the rule of the Shoguns, the lavish gold screens painted by the Kanō school for Nijō Castle in Kyoto featured large, ferocious depictions of tigers in the reception room. Guests waiting for an audience with Tokugawa Ieyasu would have to first contend with the intimidating gaze of the tiger, symbolic of the Shogun himself. While tigers (typically paired with bamboo) were common in screen and scroll painting, woodblock prints could also feature tigers as their subject matter. When paired with bamboo, the tiger symbolises strength, power and courage, and bamboo with flexibility, the ability to adapt. This is how the shogun wished to be viewed, and as the art hungry merchant class grew during the Edo period, perhaps it was something they aspired to as well.

As the tiger was not native to Japan and travel far more challenging than today, images of tigers are often unrealistic, or, at times, downright humorous to our modern eyes. Images would often reference the pelts brought back from the continent, where the tigers had

been declawed and the dehydration of the skin made the eyes more prominent and protruding. Eizan’s kakemono-e could come under this category. His print fills the diptych with the tiger, prowling around the corner of a large bamboo trunk to come face to face with the viewer.

Almost a century later and Koson’s tiger portrait is detailed and fierce. Typical of Koson’s realism, his version of the tiger is familiar to us. The eyes no longer bulging, the claws fully visible. Gone is the bamboo in favour of an austere pedestal of rocks. This tiger embodies strength and courageousness. A slightly later print by Toshi Yoshida builds on this realism once again, with a tiger in profile, looking as if watching its prey. An extremely accurate depiction of this animal shows just why it carries the symbolism it does.

The tiger has been a major symbol across time periods throughout Asia and still carries meaning for many people. Whether that’s through visual depictions or zodiac signs, the tiger reminds us to be bold, courageous and maybe, once in a while, take a risk.