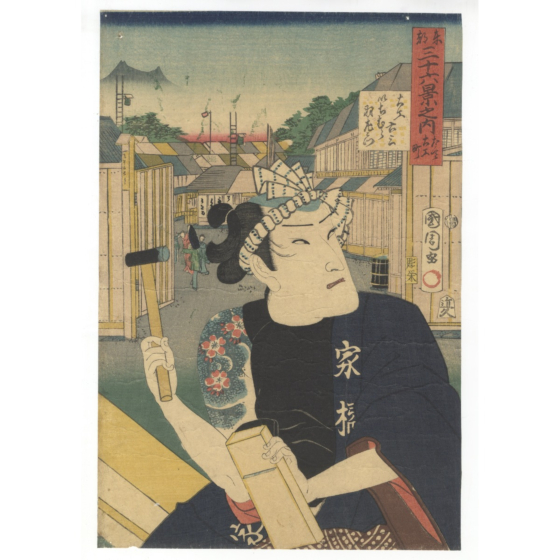 One of the last great masters of ukiyo-e, Kunichika was inspired by the plays, actors and customs of kabuki theatre. His colourful prints are records of a long lost, decadent underworld of Edo. As a young man, he studied with the ukiyo-e artist Chikanobu, from whom he received his artist name. He then apprenticed under Kunisada and began to produce actor prints in the Utagawa style, though he never used the Utagawa name. Unlike most Japanese woodblock artists of the period, he made use of strong reds and dark purples, often as background colours, rather than the softer colours that had previously been used. These new colours were made of aniline dyes imported in the Meiji period from Germany. When portraying people he only occasionally showed figures wearing Western dress, despite its growing popularity in Japan. He is also one of the best known artists to have designed a great number of prints featuring tattoos, a genre made popular earlier in Edo period by Kuniyoshi Utagawa.