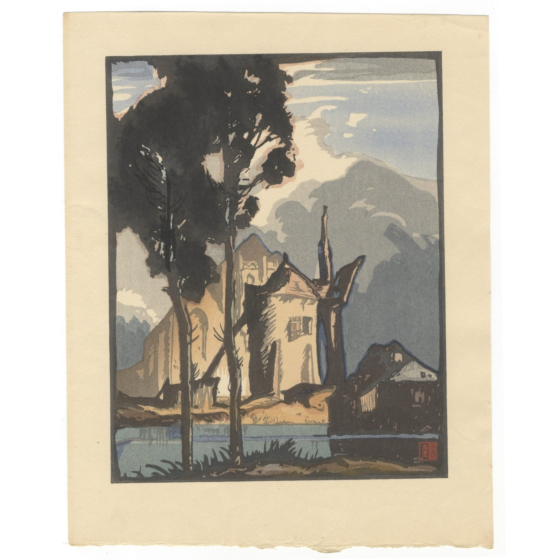 Mokuchu Urushibara was a woodblock print maker best known for his landscapes and flower studies, as well as a series of black and white prints of horses. Growing up in Tokyo, he studied the art of carving and printing woodblocks from an early age. In 1907 Urushibara travelled to London to demonstrate Japanese printmaking at the Anglo-Japanese Exhibition. He remained in London after the exhibition, restoring prints, making reproductions of prints, and mounting scrolls at the British Museum.

The atmospheric landscapes of the British Isles provided a fresh source of inspiration for Mokuchu who avidly depicted the misty streets of London. With first-hand knowledge of two different cultures, Mokuchu was able to fuse distant artistic practices and find common ground between Japan and the west, employing Japanese techniques to portray new subjects. The artist became an access point to the traditional methods of Japanese arts for the growing interest of English artists. This keen interest to learn authentic woodblock printing, amongst other crafts by English art students and enthusiasts, allowed Japanese artists to experiment and preserve their traditional styles in a time when they were going out of fashion in their homeland in favour for more novel and Western artistic disciplines.