Utamaro I Kitagawa, Mother and Child with an Owl on Perch

Title: Mother and Child with an Owl on Perch 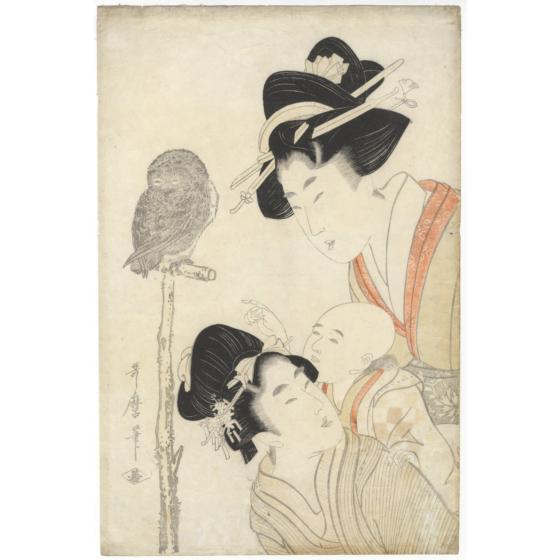 Utamaro Kitagawa is one of the most significant figures in the history of Japanese art. He is best known for his bijinga (prints of beautiful women) and a series of nature studies. He was and remains one of the artists best known outside of Japan, along with Hokusai Katsushika and Hiroshige I Utagawa.

Born in 1753, he lived most of his life in Edo (today’s Tokyo) and in his childhood studied art under Sekien Toriyama (1712-1788). He later favoured Masanobu Kitao’s and Kiyonaga Torii’s aesthetic who were both famous for their elegantly elongated images of women. In 1788 Utamaro achieved wide recognition for his work when a number of albums of the highest compositional and technical quality aided him in this achievement. These albums were published by Tsutaya Juzaburo, the most famous publisher of his day, and with whom Utamaro would create a large amount of outstanding work. They joined forces to produce innovative designs, which included close-up portraits (okubi-e), three-quarter length portraits with shimmering mica powder background and a vast array of pictures of famous courtesans from Yoshiwara, the licensed red-light district. His style during this time is defined by graceful and elegant ladies, with rich and elaborate garments, posed in such a way that also revealed the inner beauty of the sitter. His favourite motifs were women at their everyday business, making themselves up, bathing, arranging their hair, walking in the garden, mothers with children, and pairs of lovers.