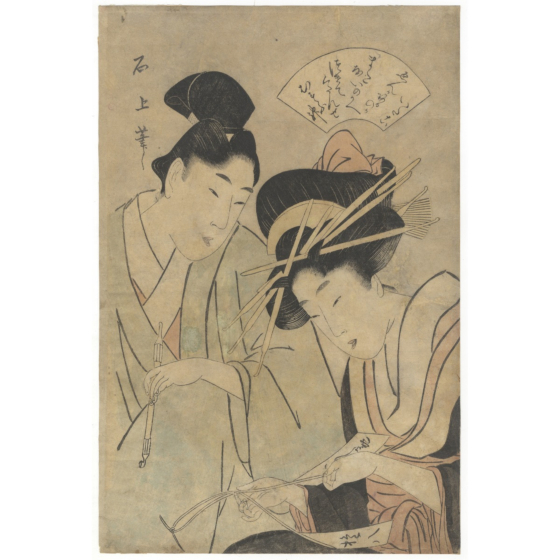 Gonpachi and Komurasaki's love story is as famous as it is tragic. They met when Gonpachi liberated Komurasaki, a merchant’s daughter, from a group of bandits who had kidnapped her. Sixteen years old at that time, Gonpachi was fleeing his home for having killed another boy during a dispute. Komurasaki warned him about the bandits’ plot to kill him and steal his sword, so he was able to defeat them and get away with her. Both free, Gonpachi declined staying with Komurasaki’s family and carrying on their trade. Instead he moved to Edo, where he encountered Komurasaki years later. She had then become a famous courtesan in the Yoshiwara pleasure quarters.

Gonpachi was too poor to buy her freedom and started visiting her frequently instead. He became desperate when money started to dwindle and started killing people, stealing their possessions to be able to see his lover. It is said that he killed about 130 people before being caught and executed. Komurasaki committed suicide in the wake of his death.

Sekijo was an Edo period ukiyo-e print artist, actively working between the Kansei and Bunka periods. Born into a samurai family, Sekijo dropped his status and adopted Juka as his family name. He is thought to have been a follower of Toriyama Sekien and much influenced by Kitagawa Utamaro’s woodblock print style, which can be seen in his work.