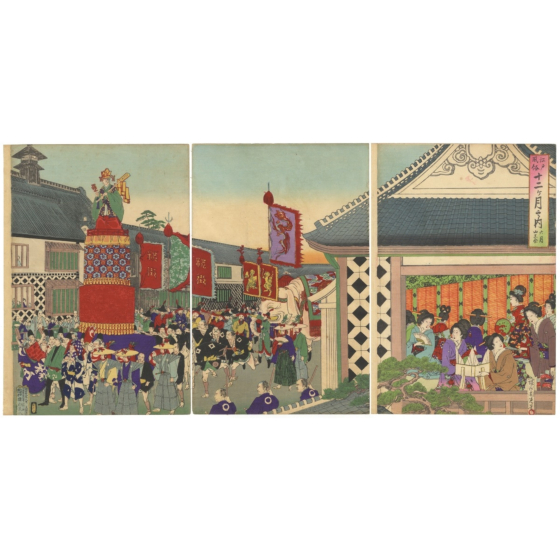 A sweeping view of a vibrant and bustling procession on the streets of Tokyo. The occasion is the Sanno Matsuri, a festival which only takes place in even numbered years in June. Centring around the city's important Hie Shrine, the festival celebrations were marked by large scale parades through the heart of the capital. The carnival atmosphere was heightened by the elaborate platforms and floats that coloured the summer streets. An imperial gift from the Chinese emperor of a rare white elephant made the festival particularly grand in 1887. Led by Korean bandsmen marching with continental banners, the ornately robed elephant is guided towards the imperial palace. Appropriately before them is a large float of the Monkey King, an eminent figure of Chinese literature and lore.

Chikanobu Yoshu was a ukiyo-e artist from the end of the 19th century. He was one of the most prolific woodblock print artists of this period, working with both traditional subjects, such as actors, courtesans, scenes of famous sites, beautiful women, and with topical subjects, such as war and rebellion. Born into a samurai family in Echigo province, Chikanobu became one of the final, great, ukiyo-e artists aiming to preserve the traditional culture of Japan at a time when the country was becoming rapidly modernised. As a child, he studied Kano style painting. When he moved to Tokyo he studied print design first at the studio of Kuniyoshi Utagawa (1797-1861) and later on at that of Kunisada I Utagawa (1786–1865).