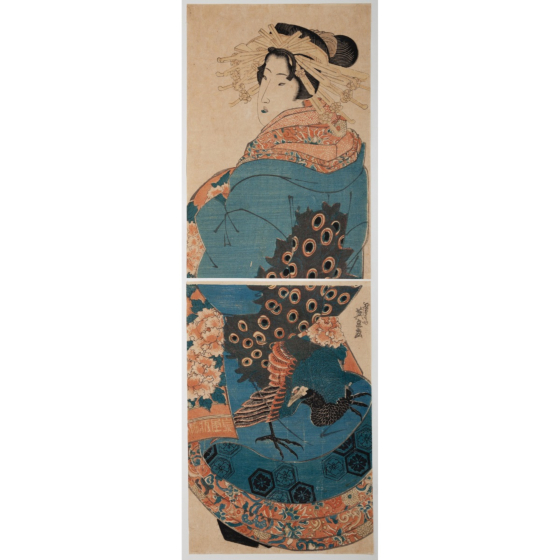 Courtesans of Edo period Japan were not only skilled in serving a male customer, but they were also experts in dance, music, conversation, and other kinds of entertainment. They operated within the licensed quarters, such as the Yoshiwara district. They had a complex system of ranks, etiquette, and procedures. A courtesan would earn her funds not only for herself, but also for her entire entourage, e.g. attendants, younger courtesans-in-training.

This courtesan's hair is done in elaborate manner with large hairpins called kanzashi. These were often made from tortoiseshell, silver, gold and gemstones, worn in a number of heavily-waxed hairstyles.

Keisai Eisen was an artist, who alongside Kunisada I (Toyokuni III), was renowned for his beauty prints, depicting courtesans and geisha in everyday life, sometimes touching on the erotic in nature. Despite his devotion to the genre he also produced noteworthy landscape prints such as the ‘Eight Views of Edo’ (‘Edo Hakkei’) series, occasionally collaborating with Hiroshige I. Eisen is also known for his development of aizuri-e, which is a term that describes ukiyo-e that is printed only in shades of blue. This technique was popular in the 1830s and 1840s and has been employed by various artists, including Hokusai. He began an apprenticeship in art early on in life, studying with the Kano painter Hakkeisai. He later was looked after by Kikugawa Eiji and became known as a pupil of Eiji’s son, Kikugawa Eizan, who was his contemporary, through curious circumstances. The feudal lord of the Hishu province wanted to own all prints produced by Kikugawa Eizan’s students and received a collection of them, in which Keisai Eisen’s prints were included. Thereafter, Eisen was then considered to be Eizan’s student, too.