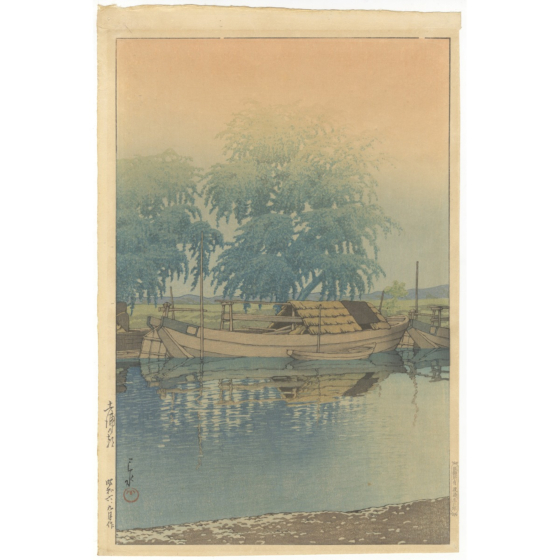 Hasui Kawase was one of the important printmakers of the shin-hanga movement and is best known for his landscape artworks. Born in Tokyo, his family was well-connected in literary circles to authors that provided texts for established artists of the Meiji era such as Kyosai Kawanabe (1831-89) and Yoshitoshi Tsukioka (1839-92). When Hasui was fourteen he trained briefly under the Shijo style painter Aoyagi Bokusen and later on with nihonga painter Kaburaki Kiyokata, the teacher of many shin-hanga artists.

In his early career Hasui worked as an illustrator and for an advertising firm. He illustrated a few books, designed posters and magazine covers. In 1918 he met the publisher Watanabe Shozaburo (1885-1962), the leading publisher of the shin-hanga movement who invited the artist to design prints for him. Hasui was most impressed by Shinsui Ito’s pensive landscapes, marking a life-long cooperation with Watanabe who had also published Shinsui’s prints.

Hasui travelled frequently almost every year during his career as an artist. He visited the countryside, towns and cities in Japan, making sketches of the sceneries. His prints often feature the moon, reddening leaves in autumn and reflections on the water surface, while the human element is hardly depicted or only suggested. These factors make the viewers of his prints feel quietude and peace, drawn to nostalgic and atmospheric landscapes. Yet it is his masterful depiction of snowfall that is most remarkable. In 1953 his skill as a printmaker was designated as an Intangible Cultural Treasure by the Japanese government, who also commissioned Hasui to create a print entitled ‘Snow at Zojoji Temple’.