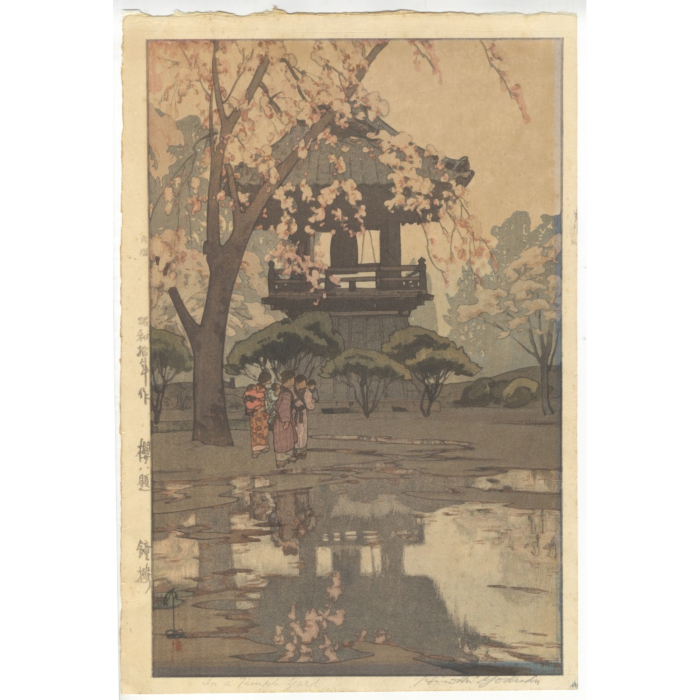 Yoshida Hiroshi was one of the leading figures in the Shin-hanga movement and successful from the early stages of his career. He was fortunate to have exhibited his paintings in oil and watercolour in both Japan and overseas and to have won numerous art exhibition prizes. Yoshida often worked through the entire process himself: designing the print, carving his own blocks, and printing his work.

This print captures a day in spring near a bell tower. A group of women carrying their children on their backs are seen underneath a cherry tree, the whole scene carefully reflected in the water in the foreground. Hiroshi Yoshida often depicted reflections in his works, a meticulous study of strokes and colour printing techniques.

Yoshida Hiroshi was one of the leading figures in the Shin-hanga (New Print) movement. He was fortunate to have exhibited his paintings in oil and water colour in both Japan and overseas and to have won numerous art exhibition prizes. Showing his works and receiving awards made him recognised in the art world. Hiroshi was fond of travelling with the combination of his own projects. In 1920, with Watanabe Shozaburo as the publisher, he made his first wood block print depicting the garden of Meiji shrine. It was one of the seven prints he made with Watanabe before the publishing agency was destroyed in the fire following the Great Kanto Earthquake.

He learned to carve and print and in some cases carved his own blocks while supervising every aspect of the printmaking process. The Jizuri (self-printed) seal is found in the margin of prints which were made under his close supervision. Many of Hiroshi's prints were exported and became popular in the West. He was one of the few Shin-hanga artists who signed his works in English. His last print was produced in 1946. His sons, Yoshida Toshi and Yoshida Hodaka, became great artists themselves. He was an enthusiastic traveller as well as a passionate climber, and most of his prints depict landscapes from his travels and alpine scenes from his mountaineering excursions. His works of mountain subjects are thought especially highly of. His skills at depicting the flowing of water and reflections on its surface are also remarkable.