Koson Ohara, Three Plovers on a Rock, the Seaside and Crescent Moon Behind 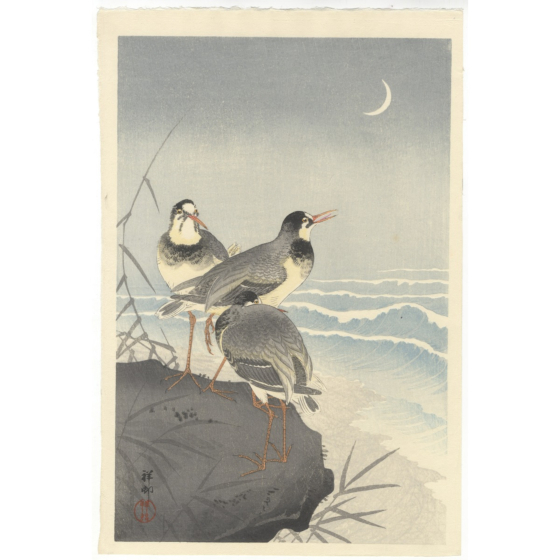 Koson Ohara was one of the great printmakers of the 20th century, best known for his kacho-e prints of birds and flowers. Koson, originally Matao, was born in Kanazawa, Ishikawa prefecture. In his youth he became a student of Suzuki Kason who was a shijo style painter.

Koson started teaching at the Tokyo School of Fine Arts around 1900 where he met Ernest Fenollosa, an American with a great passion for Japanese art. Ernest inspired him to design prints in a traditional Japanese style for export to the western market. The Russo-Japanese war renewed demand for traditional woodblock prints in the form of propaganda and he produced some ukiyo-e triptychs illustrating episodes of the war. However, during this time his work also included some landscapes, with his chief interest remaining rooted in the birds and flowers genre.

Early in his career, many of Koson’s prints were muted in colour and captured a sense of stillness and elegance. Koson’s depiction of birds is based on realism, the details of body and feathers in particular were always depicted with meticulous care. His prints can almost be described as ‘printed paintings’, as woodblock carvers and printers convincingly transmitted the painterly feel of his works to the print medium.

He worked at first with publishers Akiyama Buemon (Kokkeido) and Matsuki Heikichi (Daikokuya), signing his work Koson. Starting around 1926, he became associated with the shin-hanga publisher Watanabe Shozaburo and signed his work Shoson. He also worked with the publisher Kawaguchi, signing his works Hoson. These prints have much brighter colours than his early works, and were exported to the United States, being displayed at the Toledo exhibition in 1930 and 1936.