Kuniyoshi Utagawa, The Earth Spider Conjures up Demons at the Mansion of Minamoto no Raiko 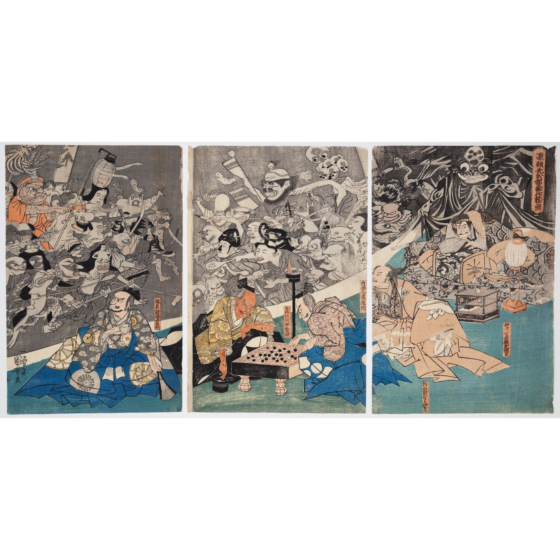 In one of Kuniyoshi's most famous designs, a vicious Earth Spider has conjured demons and ghosts to haunt the tenth-century warrior Minamoto no Yorimitsu, also known as Raiko. The warrior was famed for his legendary skill in the martial arts and most notably for defeating the oni Shuten-doji, a Japanese demon of folklore. In this triptych, however, an ill-looking Raiko is depicted sleeping in the background, while Hell itself seems to be unleashing around him.

Two of Raiko's bodyguards, Watanabe no Tsuna and Sakata no Kintoki, play go in the centre panel, while Urabe no Suetake and Usui no Tadamitsu look towards the procession of spirits in the background. To its contemporary audience, the print was seen as a thinly veiled satire on the unpopular Tenpo reforms that were carried out in the 1840s. The sleeping Raiko could have been interpreted as the shogun and the spectres as the suffering victims of the reforms. Because of Kuniyoshi's bold approach, the design got the artist into trouble with the authorities as it was also seen as a caricature of the Shogun Ieyoshi (ruled 1837-53) and his hated chief minister, Mizuno Tadakuni (1794-1851). The censors tried Kuniyoshi and his publisher and seem to have confiscated the woodblocks used to make the print, but the message had already been delivered and enjoyed tremendously by the public.

Kuniyoshi Utagawa can without a doubt be considered the master of the warrior print genre. Born in Edo (today’s Tokyo) as the son of a silk-dyer, he had first-hand experience that later influenced the rich use of colour and textile patterns in his prints. His early talent and his drawings impressed the ukiyo-e print master Toyokuni I Utagawa and he was officially admitted to his studio in 1811, becoming one of his chief pupils. He remained an apprentice until 1814, at which time he was given the name ‘Kuniyoshi’ and set out as an independent artist.

His break-through came in 1827 with the series of ‘The 108 Heroes of The Tale of Suikoden’, which is based on a Chinese novel of the same name from the 14th century. It contains tales of about 108 rebels and heroic bandits that were very popular in Japan during Kuniyoshi’s lifetime, as their strong feelings of justice resonated with the Edo public with limited freedom and under strict government laws. A series of reforms in the 1840s banned the illustration of courtesans and kabuki actors in ukiyo-e. The government-created limitations became a kind of artistic challenge which actually encouraged Kuniyoshi's creativity by forcing him to find ways to veil criticism of the government allegorically. He also played a major role in tattoo designs in woodblock prints, with many of his works still being a source of inspiration for contemporary tattoo artists.

The warriors and heroes Kuniyoshi continuously designed were extremely popular and gave the artist the nickname of ‘Kuniyoshi of Warrior Prints’. Dynamic bodies and stern expressions were characteristic to his warriors, lending them a powerful and strong look. The commercial success of his warriors gave Kuniyoshi the freedom to explore other subjects of ukiyo-e, such as animals, birds, flowers, beautiful women, monsters and ghosts. His compositions are replete with humour and often involve witty wordplay. His most spectacular triptychs of warriors resonate even in contemporary culture, with influence in modern graphic media such as manga. His most famous designs include ‘The Ghosts of Taira Attack Yoshitsune at Daimotsu Bay’ and ‘Princess Takiyasha Summons a Skeleton Spectre to Frighten Mitsukuni’.

Kuniyoshi was an excellent teacher and had numerous pupils who continued his branch of the Utagawa school. Among the most notable were Yoshitoshi, Yoshitora, Yoshiiku, Yoshikazu, Yoshitsuya, and Yoshifuji. As they became established as independent artists, many went on to develop highly innovative styles of their own.