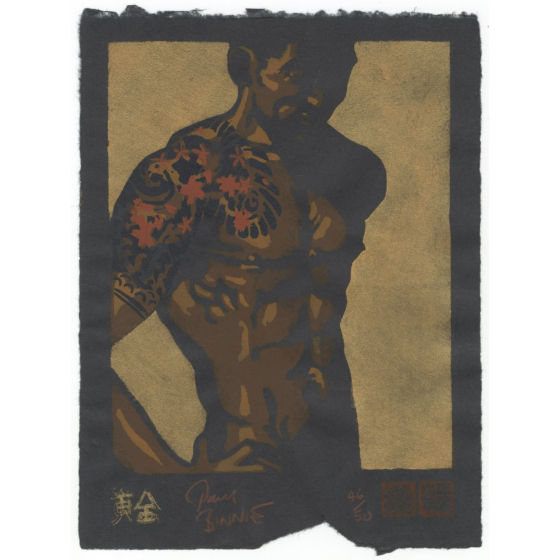 Blending traditional methods with a modern style, Paul Binnie’s work is heavily influenced by the Shin-hanga movement, founded by the publisher Shozaburo Watanabe (1885-1962). Shozaburo aimed to renew declining Ukiyo-e tradition and break into foreign markets by commissioning new, young artists who would work within the old co-operated system, composed of the publisher, artist, engraver and printers. However, Binnie works independently, making prints from beginning to the end, as was done by artists of the post-war Sosaku hanga movement. He works across several different subjects including kabuki, tattoo, landscape and beauty prints. Binnie’s original plan of a short stay in Japan changed once he started to sell his kabuki prints. He decided to expand his technique and remained in Japan creating works of this subject until 1998. His interest in Japanese tattoo was born when he saw Yakuza, members of the Japanese mafia who traditionally have body tattoos, bathing for the first time in a sento (Japanese-style public bath). Near the end of 1997, he began to expand into Japanese landscape prints, which became a huge success.