How Japanese Woodblock Prints are Made 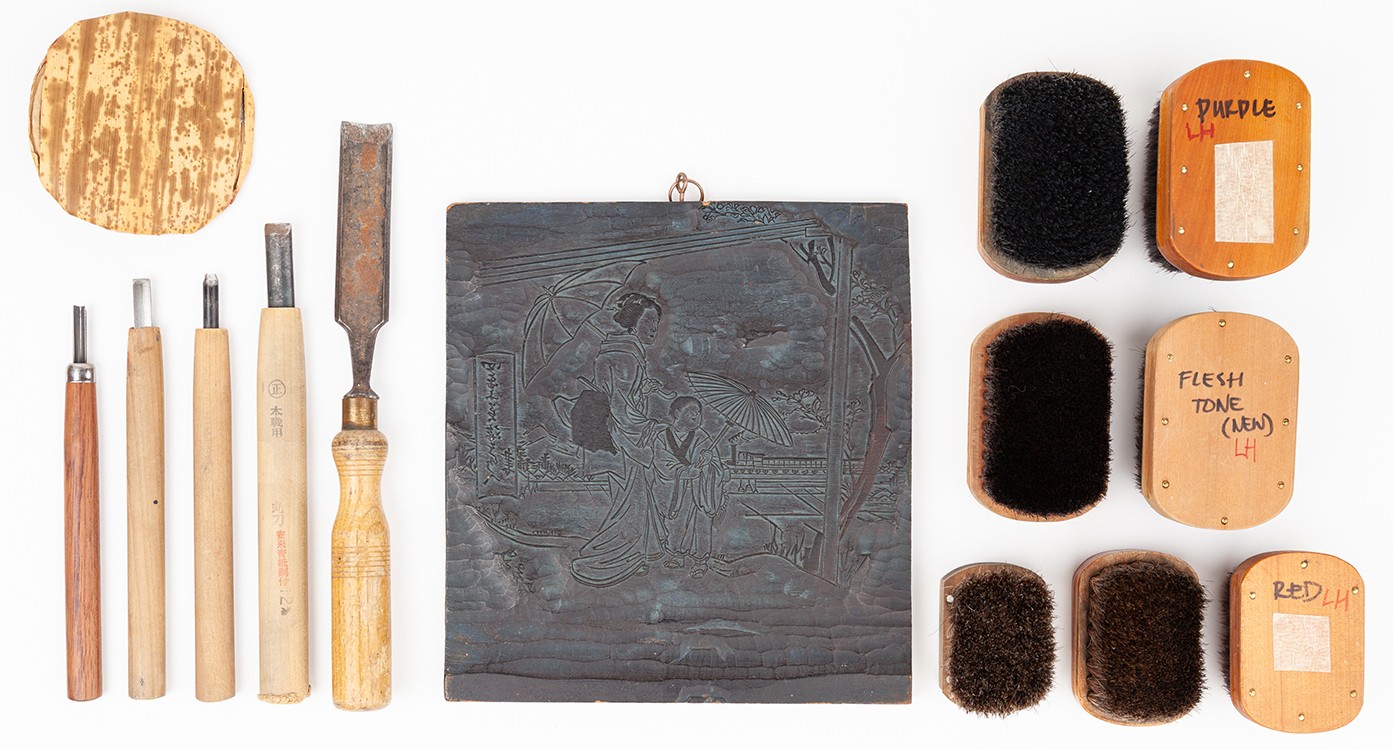 Traditionally, woodblock printing used to be a collaborative process between an artist, carver, printer and publisher. The artist would create the initial brush drawing, select colours and determine their placement within the print. This would be passed on to the carver who would carve a relief into several wooden blocks. Consolidated, these blocks would create a cohesive image, as a separate woodblock is required for each colour in woodblock printing. A printer’s job was to do the actual printing according to the artist’s instructions regarding colour, producing the final artwork.

As each print was commissioned by a publisher, traditional ukiyo-e artists in Edo prepared designs that they knew their publishers favoured. Even in this early stage of the creation of a woodblock print, it wasn’t unusual for several people to be involved. Artists might, for example, produce a complete drawing now and then, but they also often concerned themselves with drawing the main figures and the backdrop of a scene instead, leaving the details to advanced pupils or copyists (hikko).

Every finished drawing needed to be shown to a censor who was either a representative of the wholesale dealer or a government official and who would need to approve or reject the design. This is because the size of a woodblock print and the number of colours used in a single print were subject to censorship in Japan during the Edo period. 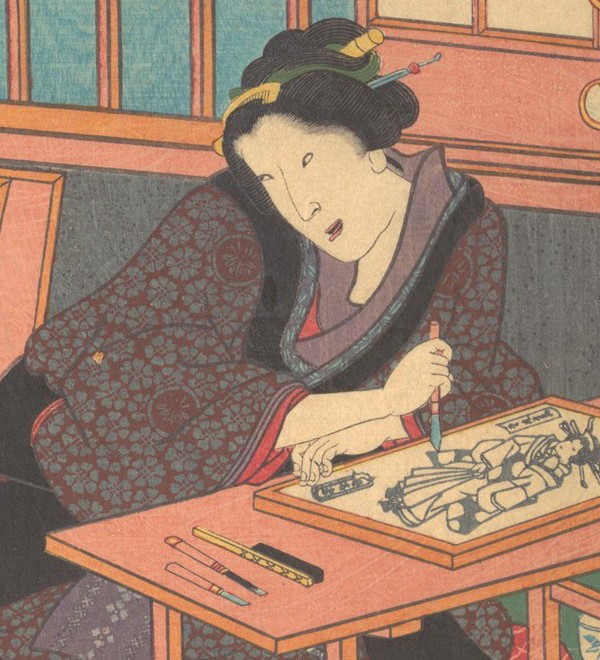 An approved design was covered with a thin sheet of minogami (traditional Japanese paper) that made it possible to trace the lines of the drawing using black ink. The resulting traced image was the same size as the finished print and was referred to as the final block copy (hanshita-e).

There are several reasons that cherry wood (sakura) in particular was the commonly used wood for woodblock printing:

The woodblock used to print the black outline in a print is called the key block. These blocks were often carved into a close-grained and hard piece of wood, as they needed to be strong, so that the lines would last.

Colour blocks on the other hand were softer, sometimes showing the grain of the wood to add texture to the design, as mentioned above. It was even a common practice to rub paper against the wood surface to bring up the wood grain.

Nowadays, cherry wood is rarely used for this craft, as it needs extensive preparation before a woodblock for carving can even be produced. The wood itself also isn’t as plentiful as it used to be. Both of these facts make it quite an expensive material to use.

Carving a block for a woodblock print starts with the tools. The chisels used in this discipline are made the same way as a samurai sword is produced, which involves an enormous amount of time and effort, purifying and folding the steel again and again by hand, then polishing it until the edge is perfectly sharp. 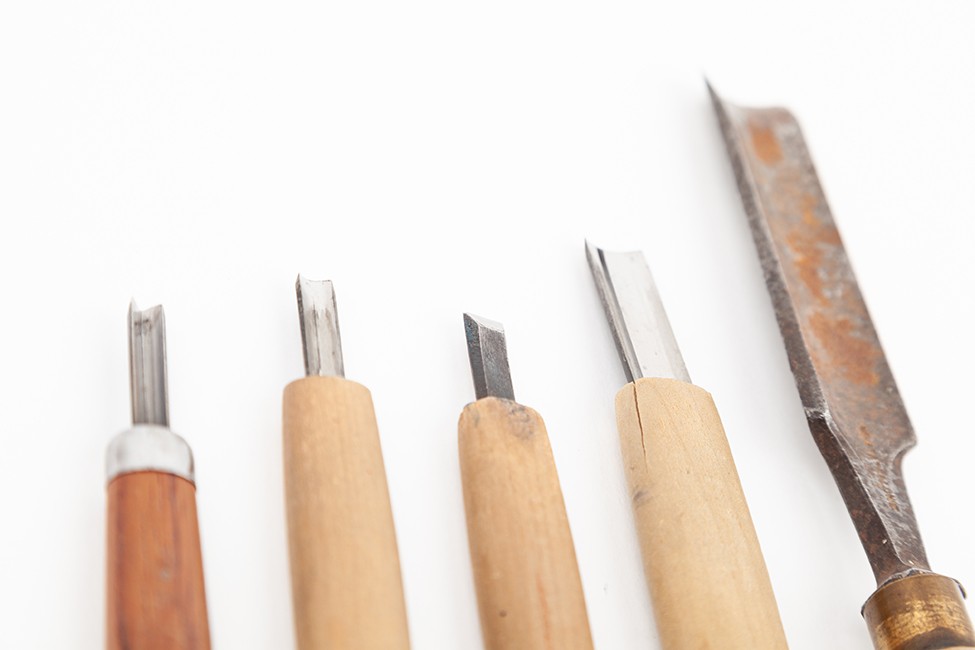 As mentioned earlier in the text, each colour in a print had be printed from a separate block of wood and that had to be carved separately. The carver would start carving the colour blocks only after they had received a proof printed form the key block (block with the outlines).

Carvers, just like artists, had apprentices that participated in the production of commercial works. It usually took at least 10 years of working as an apprentice under a master before a carver was considered an expert. As such, master carvers distributed work among their students according to skill. This system had the benefit of dividing labour and speeding up the production process. 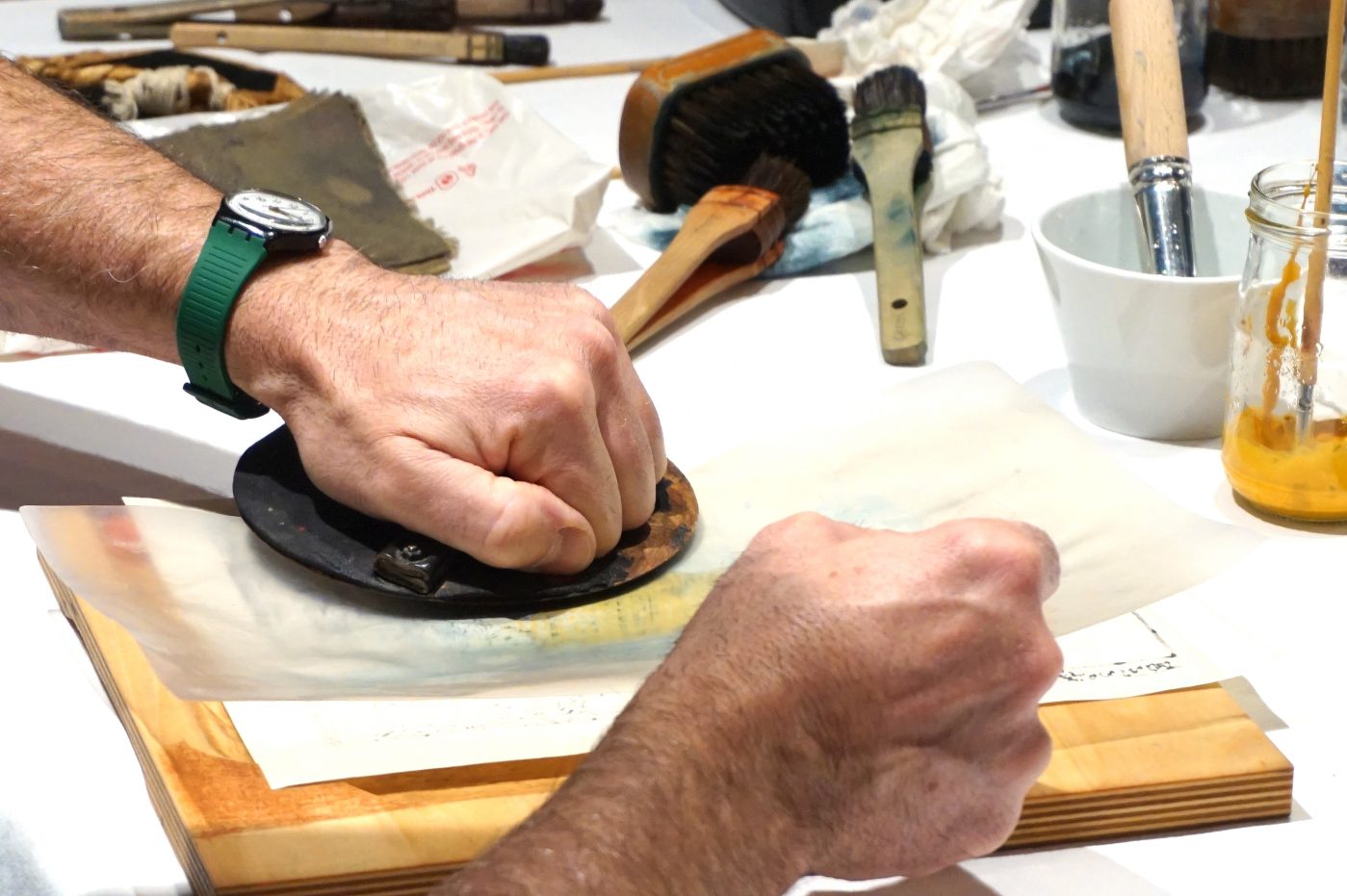 Ink and colour printers worked separately from one another and were classified differently.

Once the carved blocks reached the printer, the block to be printed from would be covered with a damp sheet of washi paper and the printer would rub it with a baren to facilitate the colour transfer. A baren is a flat disc with a handle attached on one side that is used for printing even today. The rubbing happened in a circular or zigzag motion, which professional was able to use to produce interesting visual effects during printing.

Colour dyes and pigments, as well as a small amount of a binding agent, was applied directly onto the printing blocks with the help of a brush. The binding agent helped the printer control the dye by increasing its thickness and helped to ensure that the application of colour would be uniform and without any unwanted grainy texture. In woodblock printing the dye is absorbed deeply into the paper until it shows on the reverse side of it, which helps to determine whether the printing of a colour is finished. Guide marks, so called kento, were carved into all blocks to make aligning the colours as easy as possible.

The final print followed all directions outlined by the artist and was sent to a censor for approval. If it was approved, the print was sent to production. How many times a single illustration would be printed depended on its success and how much appreciation it had garnered. Time-wise, 200-300 prints could be produced in two weeks on average, but a simpler design and a limited use of colours were able to reduce that time significantly.


During the Edo period (1603-1868), the pigments used in this discipline were completely natural, which had the enormous advantage that they would not run when coming into contact with water even after they had been applied to a print.

This changed during the Meiji period, when Japan opened its borders and started trading with the West. Imported chemical pigments, while bright and saturated colours, did not have the same durability as their traditional counterparts. 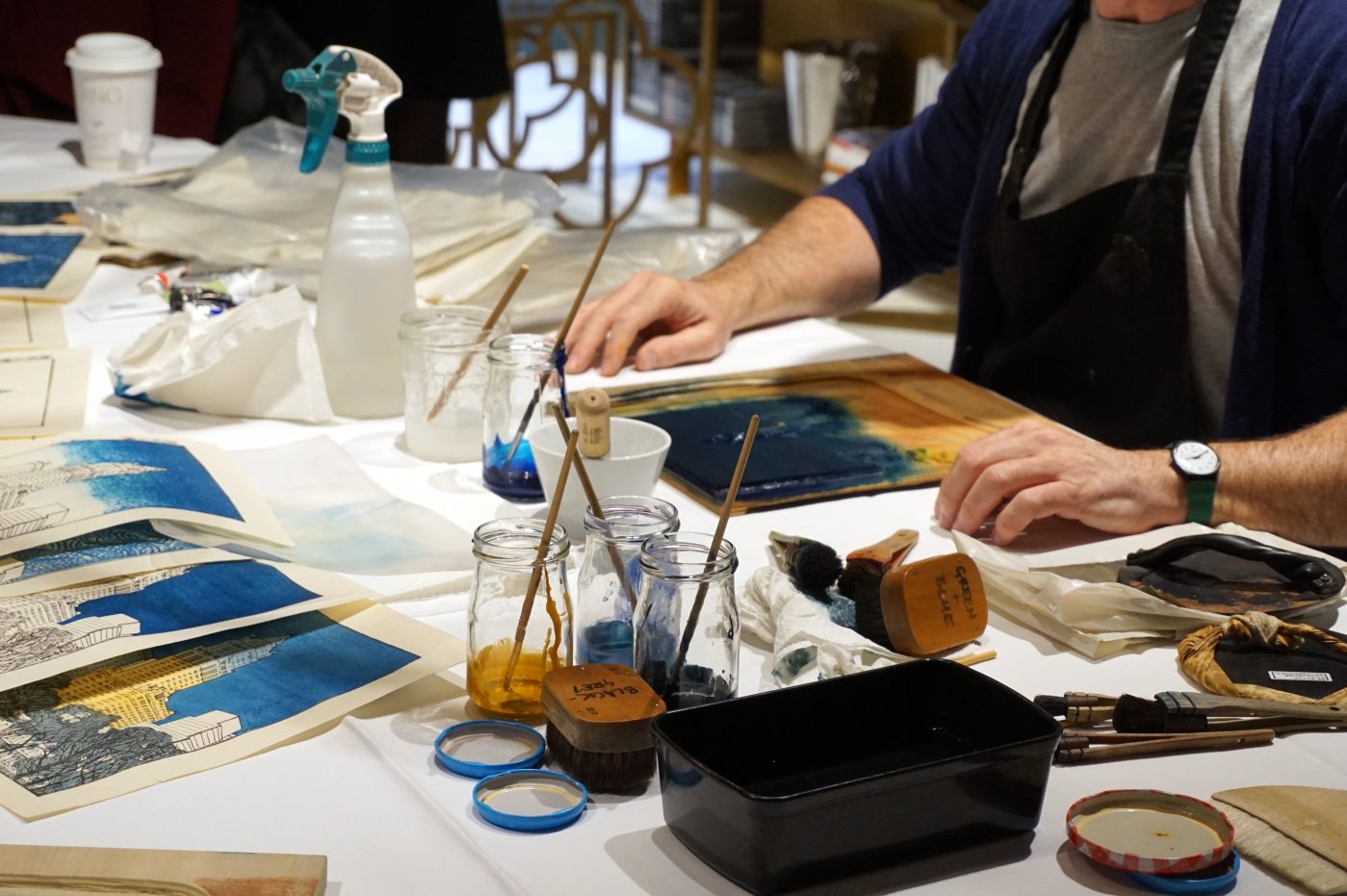 Hosho paper, made of Mulberry tree bark fibres, was commonly used for the final printing. It was just tough enough to withstand the pressure of the baren when it was rubbed overtop the paper, but was soft enough to allow pigment to penetrate it.

Woodblock printing paper is handmade paper and, because of this, used to show vertical lines, called chain lines or laid lines, on all sheet of paper. This is due to the traditional method of paper-making, wherein a bamboo mesh or screen was used to capture wet paper fibre to drain excess liquid from it. The structure of this screen is what leaves an impression on the paper, creating these lines.

Traditional paper also showed a variation in texture and appearance, due to differences in the methods of pulp preparation and the application of dosa. The latter is a mixture of glue, alum and water and was applied to each sheet of paper, front and back. The term to describe this process is ‘to size’: Sheets of paper were sized on both sides in order to avoid excessive absorption of colour pigment and to avoid the sheet sticking to the printing block.

While the tools of woodblock printing largely remain the same, the collaborative nature of the craft broke up around the start of the Taisho period (1912-1926), when the shin-hanga (new prints) and sosaku-hanga (creative prints) movements emerged. At this point, artists themselves started producing their prints start to finish. As censorship and travel restrictions became obsolete, this was the start of a period of experimentation with size, colour and subject matter.

Even though new and interesting creations emerged, the process became incredibly labour-intensive especially in comparison with modern printing methods, which is partly why woodblock printing is not very wide-spread anymore.

We hope that you will enjoy browsing traditional, as well as contemporary woodblock prints on our website and will give your support to this rich traditional craft.