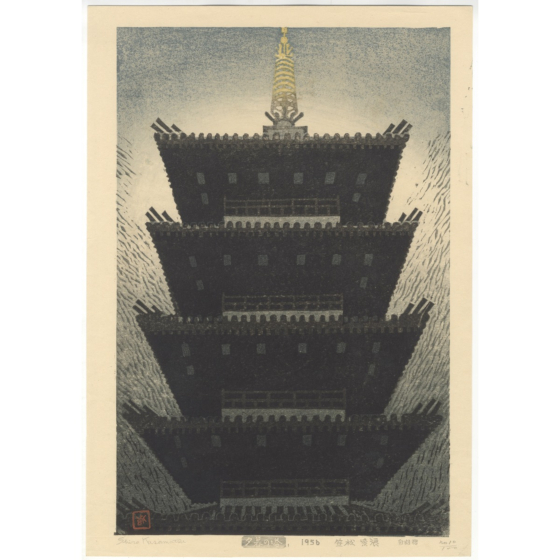 Shiro's paintings appeared at several respected exhibitions. When his works were shown at the Bunten exhibition, they attracted the attention of Watanabe Shozaburo, the Tokyo publisher who initiated the Shin-hanga (New Print) movement. Watanabe contacted Shiro about designing woodblock prints, and in 1919 Shiro’s first print was published. He designed some more prints during the next few years, but the fire that followed the Great Kanto Earthquake destroyed Watanabe's shop and the blocks for these prints of the artist. Shiro resumed working with Watanabe in the 1930’s and their relationship lasted until after the Pacific War. During the years of their collaboration, Shiro designed a number of landscape prints depicting traditional lifestyle of Japanese people and famous places. His works became popular with Westerners, and one of these prints entitled ‘Shinobazu Pond’ created such a huge demand that it was extensively reprinted over many years since it first appeared in 1932.

In the 1950's, Shiro became attracted by the idea of Sosaku-hanga (creative print) printmaking, in which artists carved and printed their own designs, yet it took him many years to independently produce his own works. By the time he started working on his own, he had collaborated with Unsodo, a Kyoto publisher. Many of his Unsodo-published prints are considered fascinating and superior to those published by Watanabe. In the late 1950's, he finally started carving and printing his own designs. These self-produced works were in limited editions and signed in English by himself, unlike those published by Watanabe, to which English signatures were applied by Watanabe's employees.