Shunsho Katsukawa, Kabuki Actor in the Role of an Onnagata 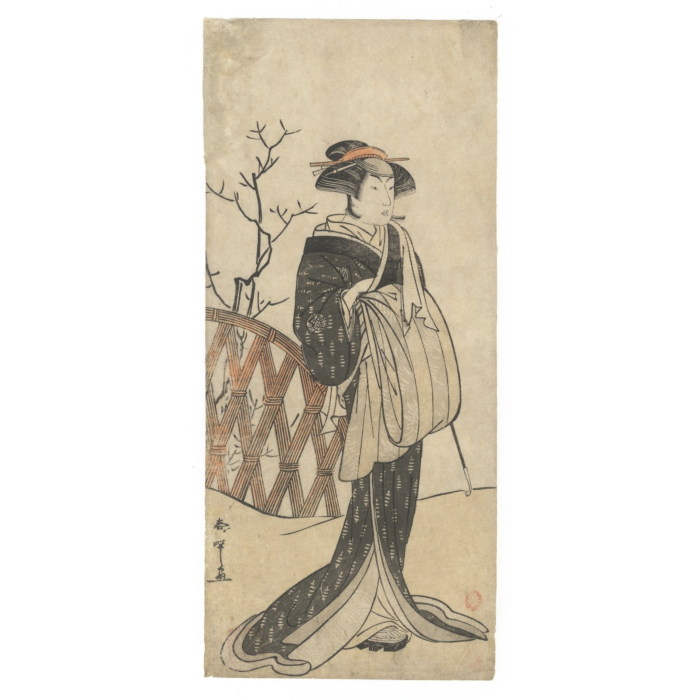 Skip to the beginning of the images gallery
More Information
Artist

The scion of samurai clan, Shunsho lived in Edo and studied under painters Shunsui and Sūkoku. Until 1767 he worked primarily as a painter, but then took up the colour print before returning to painting again in 1785. In his handling of colour harmonies – he preferred warm brown, orange and ochre hues – he was influenced above all by Harunobu and Shigemasa. In his series on the world of the kabuki theatre he strove for portrait likeness, unlike the conventional Torii school, whom he rapidly surpassed. Such likeness only became possible with the advent of nishiki-e. Like Bunchō, he attached great importance to the depiction of facial expression an character, so that the public recognise the actor without reading the accompanying inscription. After Sharaku and Kiyonobu, he is the leading master of the actor portrait. His yakusha-e in the narrow hosoban format could often be combined into multi-sheet series, giving magnificent expression to the whole breadth of the stage. After 1770 he also produced numerous book illustrations, in part in collaboration with Bunchō and Shigemasa. Later still, he interested himself particularly in the portrayal of beautiful women from every social class going about their everyday activities, he did so in his own elegant and sometimes humorous way. Shunshō was the founder of the realistic Katsugawa school, and thereby gave the new impulse to its style. Among his pupils were Shunjō, Shunkō, Shūn’ei, Shunchō and, not least, Hokusai.