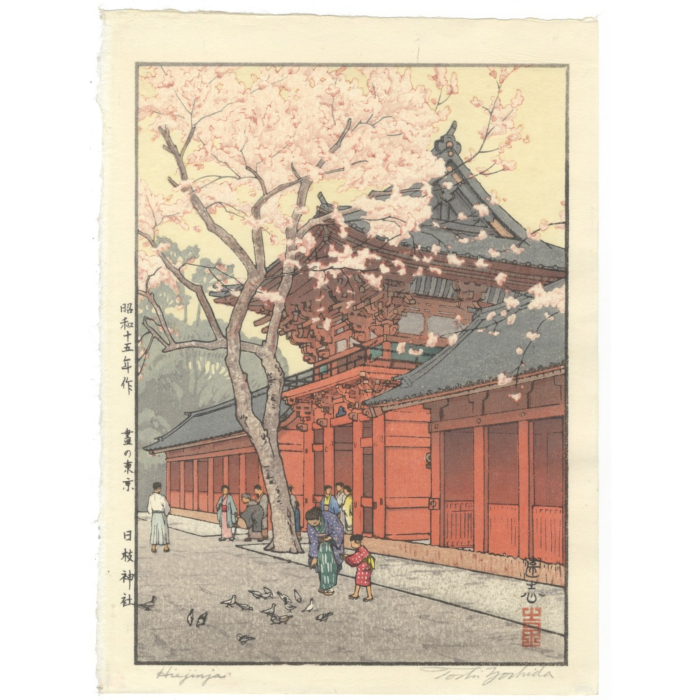 Toshi Yoshida was an extremely renowned artist in the sosaku-hanga movement of modern printmaking. His close relationship with his father Hiroshi Yoshida was instrumental in the pursuit of his art and produced many woodblock prints portraying natural scenes. While his niche was traditionally animals, occasionally he would produce landscape works, like the one seen here.

This design captures visitors on a bright spring day at Hie Shrine in Tokyo. A woman and child are feeding birds in front of the red building while other visitors in the background seem to be taking their leave after paying their respects. A tall cherry tree in full bloom adds to the cheerful atmosphere.

One of the most famous Japanese woodblock print artists of the 20th century, Toshi Yoshida was the eldest son of Hiroshi Yoshida (1876-1950), one of the most successful printmakers in the Shin-hanga movement, who specialised in the subject of landscape. During his artistic career, Toshi Yoshida struggled to balance staying loyal to his father and developing his own style, while seeking how to renew the declining Ukiyo-e tradition as a Shin-hanga artist. Although he chose animals as his speciality in 1926, his early works through the 1950s, like 'Tokyo at Night' (1938), adopted landscapes in a style similar to his father’s. However, compared to Hiroshi’s elaborate, subdued and monumental landscape prints, Toshi’s usage of rich and profound colour succeeds in expressing candid traditional Japanese scenery.