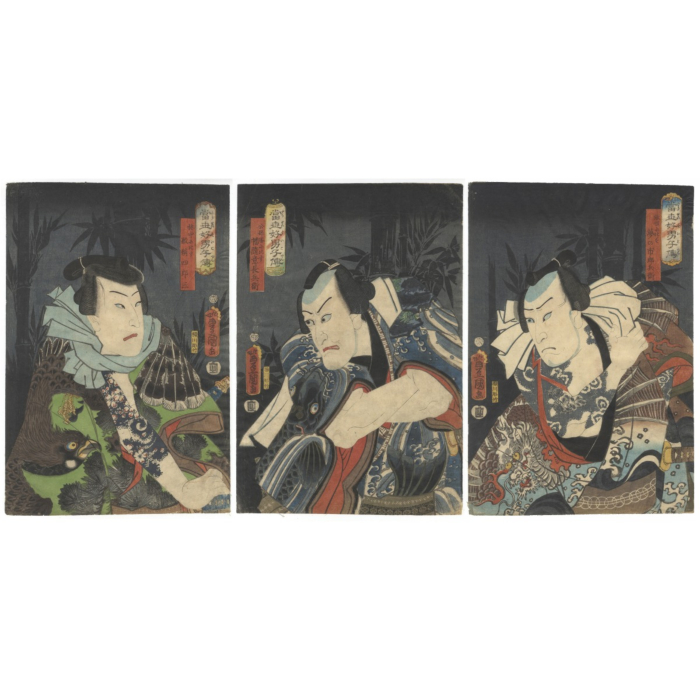 The samurai class of Edo Period had yet to adjust to the daily routine of peacetime and grew frustrated with the loss of status and usefulness. Bored and idle, they frequently caused trouble in towns and were involved in street fights and robbery. At the same time, the commoner otokodate (street knights) were gaining confidence in their strength among the merchants and they were employed by clerks, shopkeepers, innkeepers, and artisans for protection. The samurai and the otokodate were thus natural rivals, and as each group banded together into teams under leaders, fierce and bloody clashes broke out frequently.

The otokodate were one of the main groups to adopt tattoos as a recognisable feature and they were idealised and romanticised in ukiyo-e and kabuki dramas. In this triptych, Toyokuni III depicts his own version of Suikoden, by comparing actors to famous heroes. The central figure, Banzui Chobei, is played by Ichikawa Danjuro VII, here under the name of Ebizo V. No tattoo is visible, but his kimono pattern of a carp in a waterfall could easily be a tattoo design as well. On the right-hand side panel, Yume no Ichirobei has a bat-winged dragon kimono and his arm is tattooed with a thunderbolt. On the left-hand side panel, Samezaya Shiroza wears a predatory eagle pattern on his kimono and his tattooed arm is decorated with cherry blossoms.

Related Products
Check items to add to the cart or