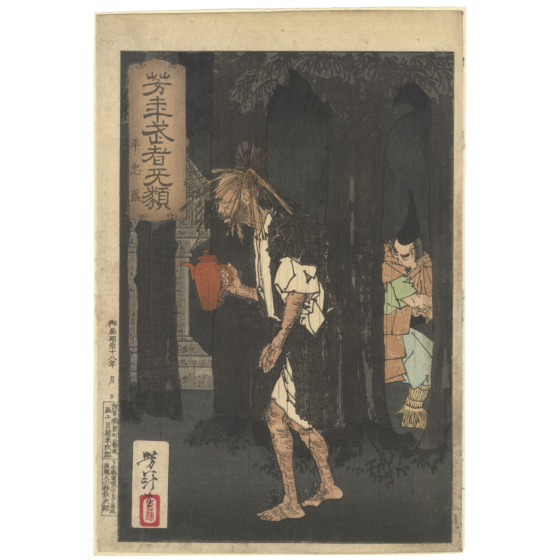 Several disturbing rumours floating around the old capital of Kyoto finally reached the ears of the Emperor: a mysterious and haggard figure had been sighted near the temple Yasaka no Yashiro at night, with writhing spikes emerging from its head and fire breathing from its mouth. Taira no Tadamori, the Emperor's personal samurai and guard, set out to quell the demon. Approaching the temple path at the dead of night, Tadamori caught sight of the flaming tongue of the beast from a distance. He quietened his presence, using the tall trees by the precincts to cover his pursuit. Finally drawing near, the warrior is bemusedly surprised. The so-called monster was, in fact, a servant of the temple charged with lighting the oil lamps around the grounds. His ghastly horns became a simple straw hat at the close view and his fiery tongue simply the torch he kept burning through consistent blowing.

Yoshitoshi uses this tale to create a tense arrangement in black. Streaks of ink signal the rainy night and varying gradations provide depth to the shadowy sky. The unkempt look of the priest is portrayed particularly grisly, with his hair realised in thick curved strokes. Mostly covered from view by the large tree trunks lining the scene, Tadamori pose is full of drama. Yoshitoshi manages to suggest the preparatory stance of his strike in the limited space between the trees, using only the crossing of his arm and firm positioning of his leg to give the impression of a warrior ready to charge at his enemy.

Yoshitoshi Tsukioka was one of the leading woodblock print artists during the Meiji era (1868-1912) and one of the last to work in the traditional ukiyo-e manner. Born in Edo (today’s Tokyo), he showed a strong interest in classical Japanese literature and history. When he was 11, he became a student at Kuniyoshi Utagawa’s studio. Under his teacher’s guidance, he showed exquisite draftsmanship and learned how to draw from life, something not necessarily part of the training schools of painting and illustration in Japan.

Yoshitoshi’s rise as an artist came at a time when Japan was faced with great changes and challenges. The new Meiji era (1868-1912) brought many conflicts between those loyal to tradition and those wishing to embark on a process of forced modernisation and adoption of western values. These sentiments, along with having witnessed some of the violent uprisings, influenced his early career, with intense, often disturbing images that reflect turmoil and pain. Even so, many other prints from this early period show whimsical touches, with reinterpretation of themes seen in his teacher Kuniyoshi’s works. With deep cultural roots, Yoshitoshi’s style was dynamic and distinctive: he was known for experimentation in style and genre, as well as for his innovative works. He worked on series depicting kabuki actors, bijinga (pictures of beautiful women), warriors, monsters and ghosts. Supernatural themes abound in his later work, showing a fascination for old Japanese folk stories.

The publishing of Yoshitoshi’s most popular series 'One Hundred Aspects of the Moon' commenced in 1885 and spanned a wide variety of subjects, such as warrior, animals, ghosts, natural phenomena, beauties and others. The artist’s early tendency for gore and horror was replaced by images of lyricism, calm, spirituality and psychological depth. 'Thirty-two Aspects of Customs and Manners', published in 1888, shows Yoshitoshi’s ability to portray emotions like no other artist of his time, presenting women of various background and eras in Japanese history, each with distinct traits.

In 1889, the series 'New Forms of Thirty-six Ghosts' started to be published, showing images of apparitions, mostly based on folklore and plays, depicted powerfully and imaginatively. This was, perhaps, a catharsis for the artist who claimed to have seen ghosts and strongly believed in supernatural beings. Many of Yoshitoshi’s late works were acclaimed at a time when western techniques of mass production such as photography were making the woodblock obsolete, breaking new ground by portraying intense human feelings through a traditional medium. He became a master teacher and had notable pupils such as Toshikata Mizuno and Toshihide Migita.