Keinen Imao, Keinen's Album of the Birds and Flowers / Skylark 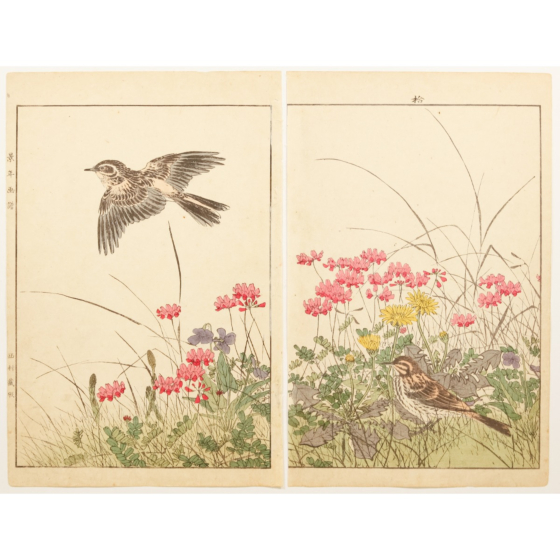 Imao Keinen was born in Kyoto in 1845, as the fifth son of Imao Inosuke. He first studied Ukiyo-e with Umegawa Tokyo, and later studied painting and calligraphy under Suzuki Hyakunen. He created his own eclectic style by studying other styles as well. He worked in his father’s business and studied painting in the evenings, that is until he started his own studio in 1868 (the family business was lost towards the end of the Tokugawa period). At this time Nanga painting was at its summit, and many artists turned to Nanga, but Keinen remained true to his own style. During this period, he found himself working as a design advisor for a textile company to make ends meet.   By 1890 he was a professor at the Kyoto Prefectural School of Painting, and was a frequent exhibitor and prize-winner at many shows and exhibitions in Japan and in Paris. In 1904 he became a member of the Art Committee of the Imperial Household, and in 1907 a juror for the first Bunten. In 1919 he became a member of the Imperial Art Academy. His favored subjects are of flowers, birds and landscapes. He was probably the most famous painter of this period (early 1900) within Japan.