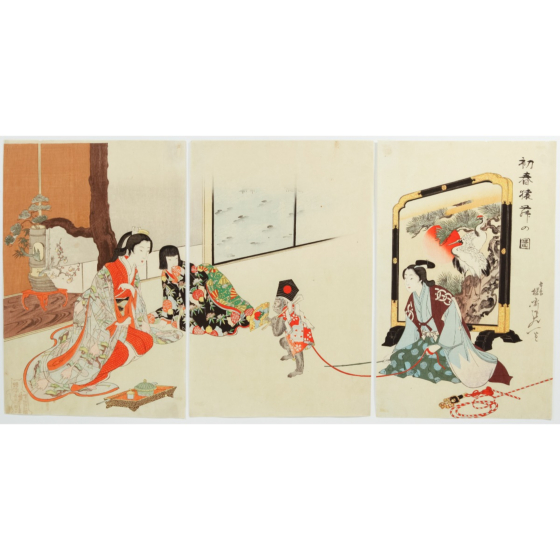 Nobukazu Yosai was a woodblock print artist from the end of the 19th century. He worked in a variety of genres from pictures of beautiful women (biiinga) to famous views of modernizing Tokyo (kaika-e), including depictions of domestic industrial exhibitions, depictions of the emperor and empress, and war and rebellion prints (senso-e).

Battle triptychs were produced in large numbers during the Sino-Japanese (1894 - 1895) and Russo-Japanese wars (1904 - 1905) to satisfy widespread interest in the progress of the imperial army and maintain popular support for the conflicts. The prints idealised the heroism of Japanese troops risking their lives for the emperor. As the demand for traditional woodblock prints fell in the Meiji era, many artists turned to wartime propaganda to make ends meet. Nobukazu did a considerable number of outstanding triptychs and made his reputation designing battle scenes on land and sea.

Nobukazu is considered to be the best student of Chikanobu Yoshu (1838-1912), whose style can mainly be seen in his beauty prints. He carried over the tradition from his teacher to depict court ladies in beautiful settings, at celebrations or enjoying everyday life.