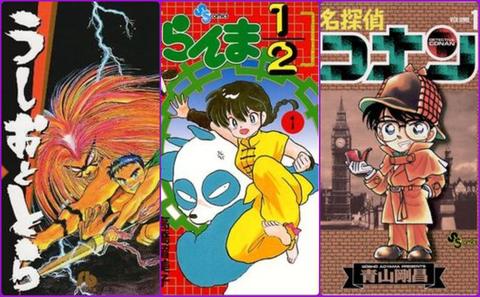 Japanese Gallery August 21, 2021 Anime & Manga 97 Views
Anime. If you’re reading this then clearly you have some sort of interest in this wonderful medium. While you may have seen many different anime series, you might not be totally aware of how the industry works. In this two-part series we’ll talk about two major characteristics of the anime and manga industry: manga magazines in Part 1, and audience demographics in Part 2.
As you may know, most anime series are adapted from an existing source, typically Japanese comics known as manga (漫画, Eng: ‘whimsical pictures’). One major difference between the manga industry compared to, say, the comics industry in the USA is that manga are typically written and drawn by the same person, known as a mangaka. Contrast this with how US comics have whole teams of writers, illustrators, pencillers, inkers, letterers, etc. (although mangaka often have assistants). As a couple of examples, Dragon Ball was written and drawn by a man named Akira Toriyama, while Sailor Moon was written and drawn by a woman named Naoko Takeuchi. Another major difference is that manga typically tell long-term stories, focusing on arcs and sagas that come in a specific sequence (a trend that translates to their anime adaptations) as opposed to coming out in single-issue stories like is the norm in the USA. A third major difference is manga magazines.
You see, manga are most often published in magazines owned by specific publishing companies, and each magazine features several different series from different mangaka. When a mangaka has finished a new chapter of their ongoing series (which may take a week, a month, or even an irregular period of time), they send it to their editor to be edited and then published in a magazine. The magazines themselves are published at different rates, with some publishing weekly, some biweekly, some others monthly, and others still have their own schedules. Readers who buy the magazines thus get to read new chapters of every series that is currently being published in that magazine. This might all sound confusing, so let’s take a look at an example: Weekly Shōnen Jump. 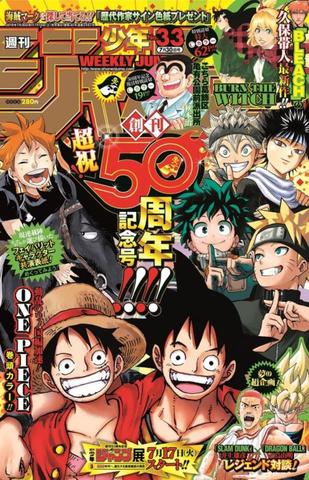 Weekly Shōnen Jump celebrated its 50th anniversary in 2018 with some of its biggest heroes! How many can you name?

Weekly Shōnen Jump (often shortened to Shōnen Jump, or just Jump) is a manga magazine published on a weekly basis, owned by the company Shueisha. By far the biggest and most successful magazine, it is home to many classic series, including Dragon Ball, Yu Yu Hakusho, Slam Dunk, Yu-Gi-Oh!, Saint Seiya, Hunter x Hunter, Rurouni Kenshin, and more. So, if you were a fan of these series in the 1990s, you would buy new issues of Jump every week and get to read their newest chapters. Once enough chapters of a series have been published, they are then collected to be published in a single manga book specific to that series. This book format is called tankōbon and comes out in volumes, with each volume containing around 10 chapters. Tankōbon are actually where the mangaka make their main income from, and are an alternative method for readers who are fans of specific series but don’t want to buy the magazine the series is published in.
Now, there is another major aspect to these magazines: demographics. Most magazines target a particular group, divided primarily by age and sex. Manga magazines are categorised, advertised, and even often titled after the demographic group they are after, like Jump above ('shōnen' being one of these demographic groups). Most magazine publishers clearly identify their demographical category as classified by the Japan Magazine Publishers Association. So even though manga as a medium can feature many different genres, a manga series (and by extension, its anime adaptation) is more defined by its target demographic rather than its genre. For example, a fantasy adventure manga for teenage boys will have more in common with a high school comedy manga in the same demographic, rather than with a fantasy adventure manga for teenage girls or a fantasy adventure manga for adult males, and will thus share considerable readership (especially if they are published in the same magazine).

This is one of the most notable hallmarks of the anime and manga industry; due to the demographical division, the Japanese audience has always understood that some series are meant for kids, while others are for adults, just as some series are preferred by boys and others by girls. This goes back to even the progenitor of modern manga: Osamu Tezuka, widely considered to be the godfather of modern anime, has created works that range between action-heavy sci-fi such as The Mighty Atom (known in English as Astro Boy), to a fantasy princess adventure like Princess Knight, to adult-oriented suspense thrillers such as MW, and even World War II-related dramas like Adolf and Ayako. Modern mangaka may also publish different works targeting different demographics, published in the appropriate magazine of course.
Now that we’ve established the basics of the manga industry, you might be asking, “So what are these demographic groups? And how many of them are there?” Don’t worry; we’ll cover that in the second part! See you there!
Share